As a teenager my adoration of the Boeing 747 ignited a lifetime passion for the aviation industry. What began as a very modest 1:600 scale diecast model collection in the early 1970s has grown exponentially in size and personal commitment.  My focus over the past two decades has been on building up an eclectic 1:400 scale commercial airplane replica fleet, with a preference for special or unique liveries involving of course the B747, with Cathay Pacific at the very top of my list.

The Hong Kong based carrier operated different variants of the B747 for 37 years, beginning in June 1979 with the rollout of its first aircraft.  B747-267B, line number 385, was fittingly registered VR-HKG and wore its magnificent 1970s/80s livery, including a prominent green color, owner Swire Group’s logo in front and the British flag in the upper tail. 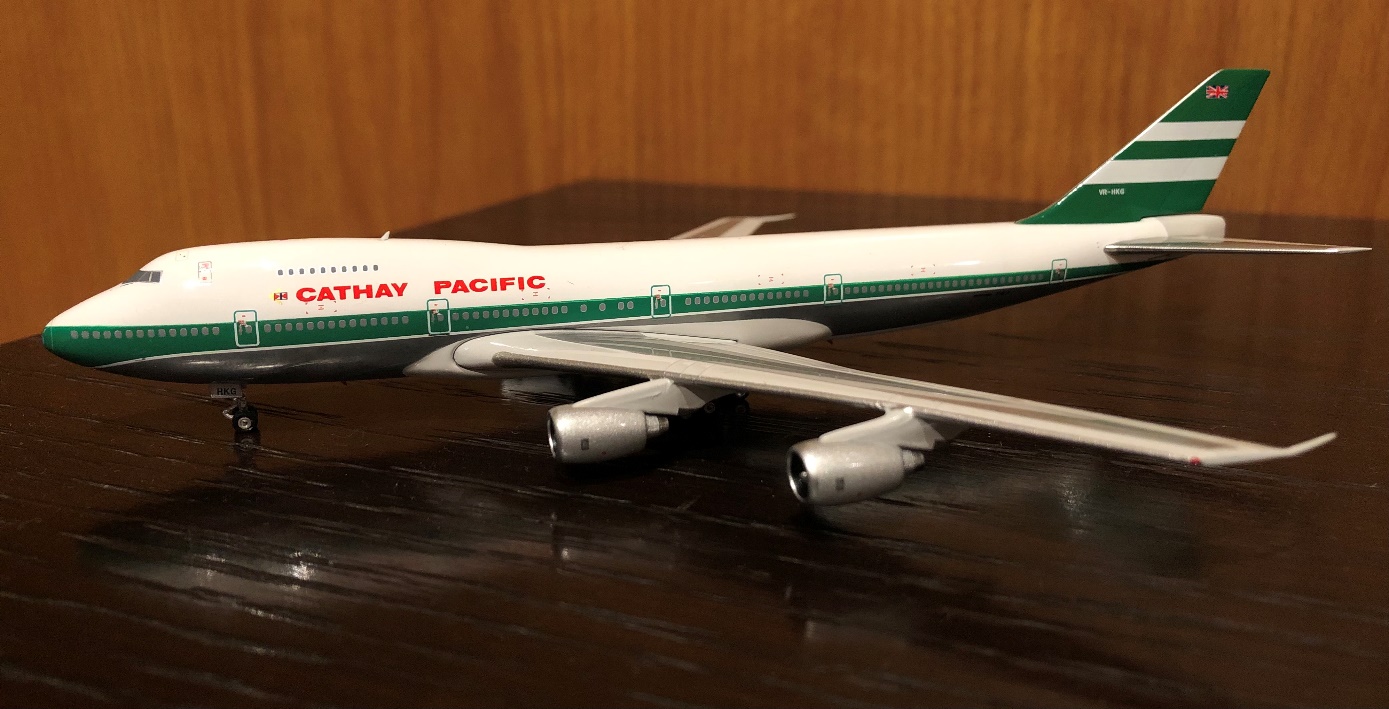 With the handover of Hong Kong to China in July 1997 Cathay Pacific undertook a bold image evolution and livery makeover, reflecting a modern and stylish look. Delivered in September 1997, its first -400 series, B747-467 line number 1033 was registered VR-HNI for a short time only, as all VR- registered aircraft transitioned to China’s B- registry by the end of 1997 (B-HNI is applied on this model). The Swire Group logo was redeployed to a less visible spot aft of the last lower-deck window.

To commemorate Hong Kong’s new status, B747-267B (B-HIB) was unveiled on July 1 in stunning special colors. It featured the titles “The Spirit of Hong Kong 97” on the right side and its Chinese equivalent on the left side of the aircraft, a rendering of the city’s famous skyline on both sides and a traditional Chinese brushstroke character in the middle. It was retired in 1999 as the airline continued to build up its younger –B747-400 series fleet. 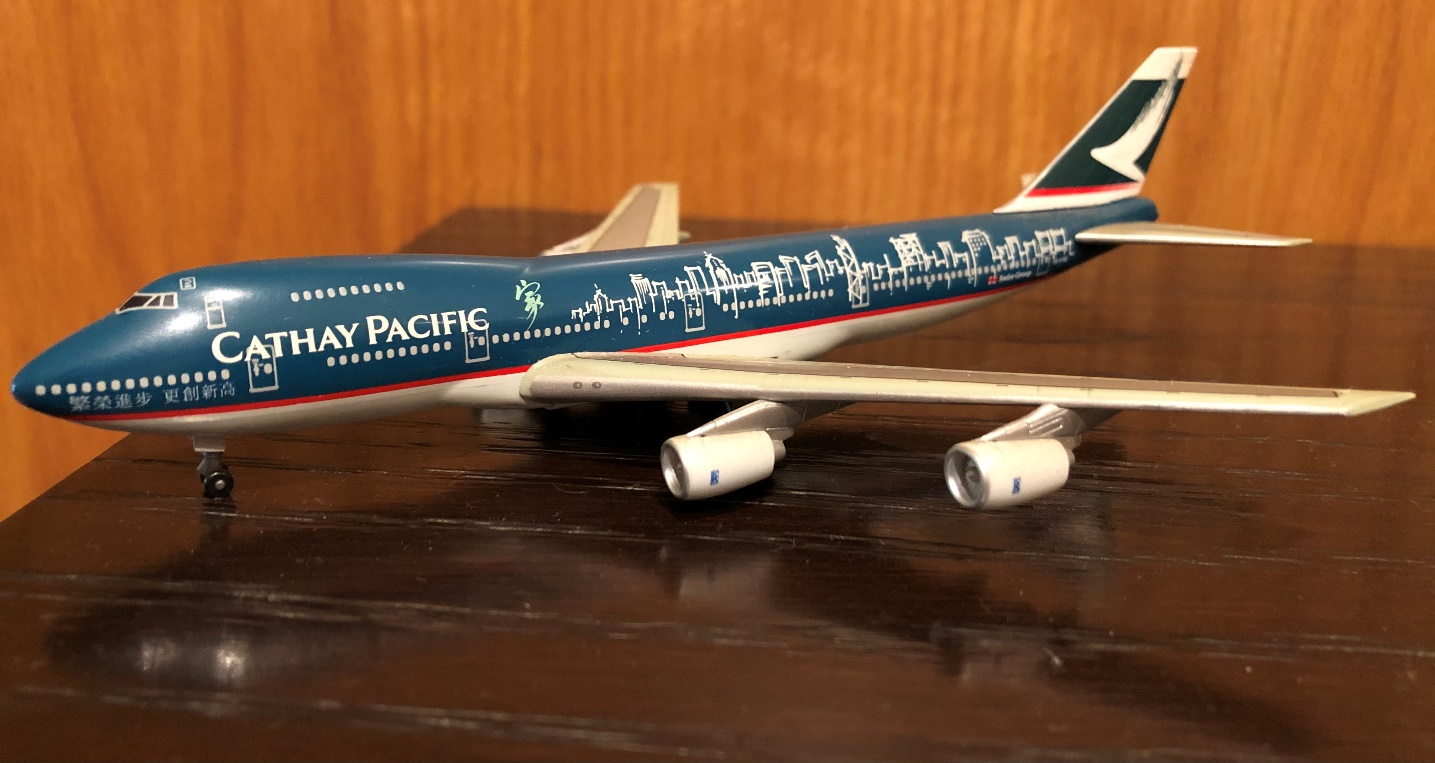 On July 5, 2002 special-liveried Boeing 747-467 (B-HOY) was rolled out, carrying “Asia world city” titles. Brand Hong Kong (its dragon logotype clearly visible) was launched as a government marketing initiative to develop Hong Kong´s image as a world class city, and what better way than to use a stunning globe-trotter flying billboard. This livery was removed in 2008 in favor of a B777-300ER.  The -400 series was phased out in October 2016, leaving Cathay with a cargo only B747 fleet since then. 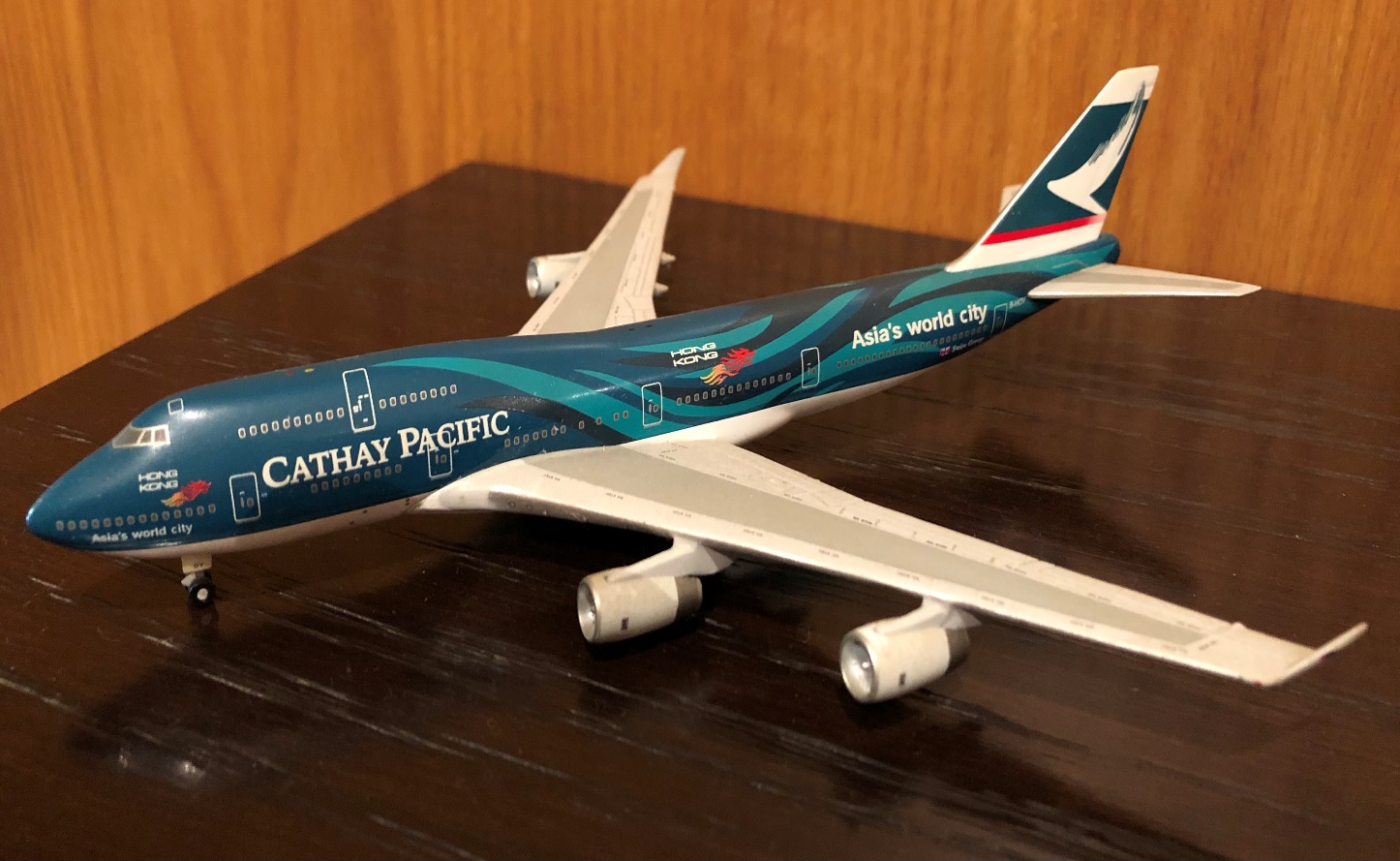 Cathay Pacific received its first of fourteen new generation 747-867F cargo aircraft in November 2011. Line number 1427 (B-LJA) was delivered in the beautiful “Hong Kong Trader” livery in celebration of the airline’s new cargo terminal completion. The name was inspired from its very first 747-267F, dating back to the early 1980s. Elements of both B-HIB (city skyline) and B-HOY (Brand Hong Kong dragon logo) are visible on the fuselage, which was repainted in August 2018 into the latest image. 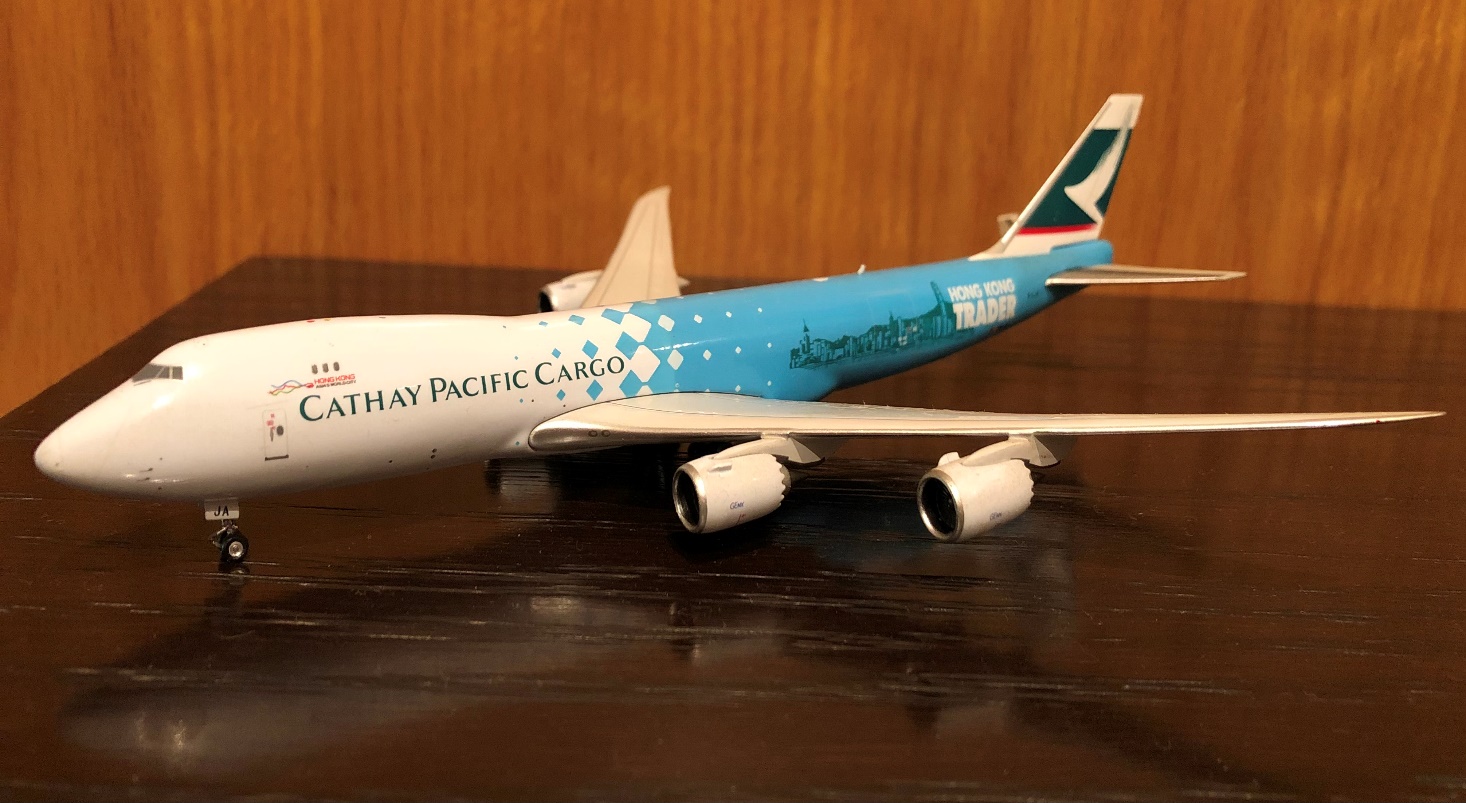 The current livery was implemented in late 2015. A variation of the former color scheme, it preserves the fundamental green/grey/white color combination and incorporates brush-winged markings, as displayed by B747-867F B-LJN. 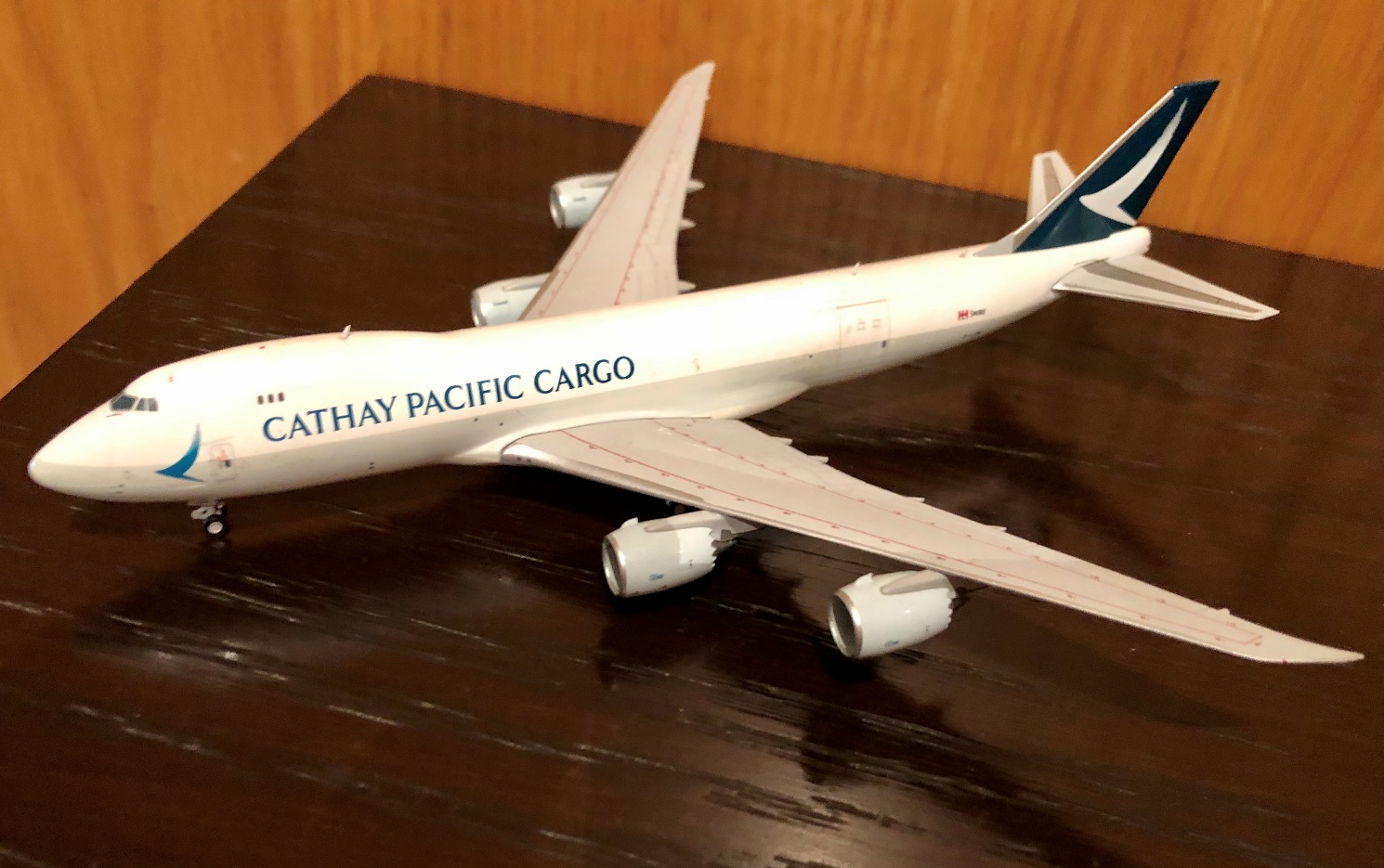 Thanks to these great miniatures Cathay Pacific’s B747 legacy can be preserved and cherished.