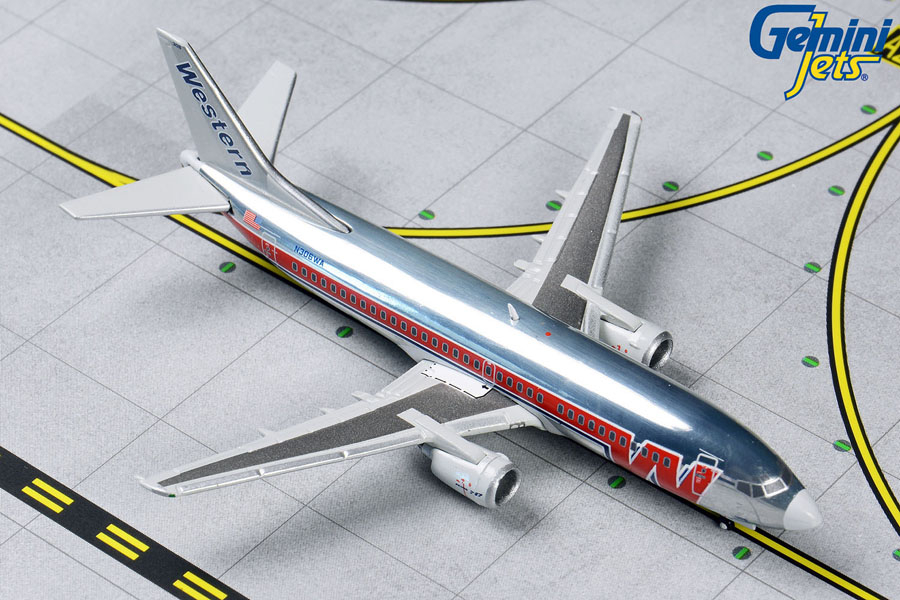 Western Airlines.  America’s Senior Airline.  The Only Way to Fly.  It helped make Los Angeles the big-time metropolis that it is (San Francisco, at the time, was far bigger, and was also the West Coast Terminus for the Transcontinental Air Mail).  It put Salt Lake City on the map as a viable airline hub, not just another backwoods destination.  Movie Stars flew them all over the West Coast.  Champagne and Hunt Breakfast Flights.  Swizzle Sticks and Wally Bird.  The airline that got me utterly HOOKED on this wild and insane industry.  Western was never a giant, but it managed giant feats for an airline its size, and with its geographical handicaps (thanks to a laggard Civil Aeronautics Board, Western’s Route System grew very slowly).  Once deregulation hit, the airline found itself struggling to survive.  Only a drastic redrawing of is system centered around the principal hub of Salt Lake City and a secondary hub in Los Angeles could save Western from an early grave.  That same new management also decided that the recently ordered Boeing 767-200’s just didn’t fit the new route structure, so the order, instead of being cancelled and valuable deposit money being lost, was converted to an order for a mix of Boeing 737-200’s and the still in development 737-300.  This move turned out to be the best thing for Western, and the rest is history. 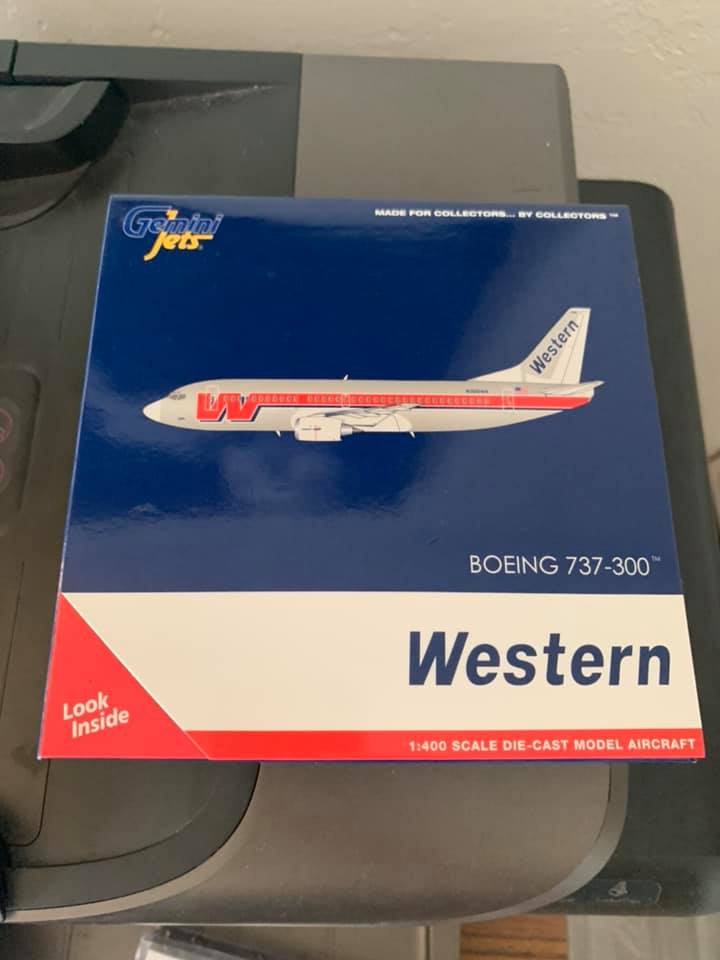 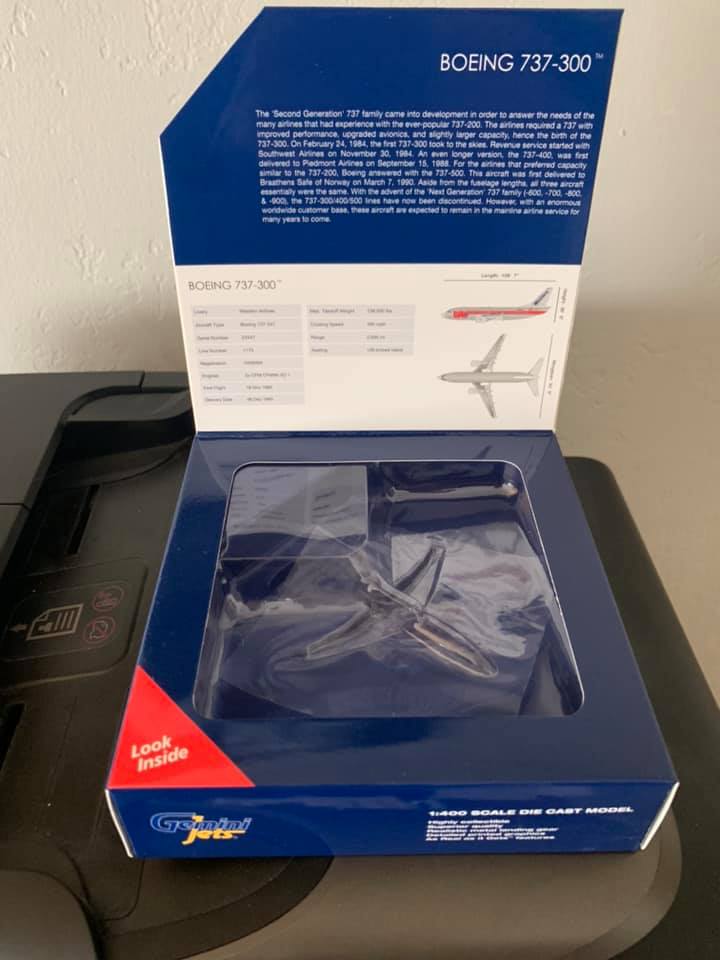 Ever since I was a kid, I had always kept an eye out for any model with the iconic “Flying W” livery on it.  Any scale, any size, didn’t matter.  I had to have it.  Over the years, the 1/400 scale industry has exploded, and there have been a few Western Airlines releases over the years,  but usually it was in the Indian Head livery of the 1950’s and 1960’s, or the red and white “Flying W” livery introduced in 1972.  Very few offerings of the final bare metal “Bud Lite” scheme.  In fact, Gemini Jets released the DC-10-10 in said livery, and Aeroclassics also released a 737-300 and 727-200 as well, all of which have a spot in my collection.  But when Gemini Jets announced in Summer 2019 that they were releasing a 737-300 of N306WA, the 8th 737-300 delivered to Western, I never got the memo.  In fact, I never knew about the model until I walked into The Airplane Shop in Las Vegas just the other day!  So, I did what anyone in my predicament would do.  I bought the model and brought it home for review. 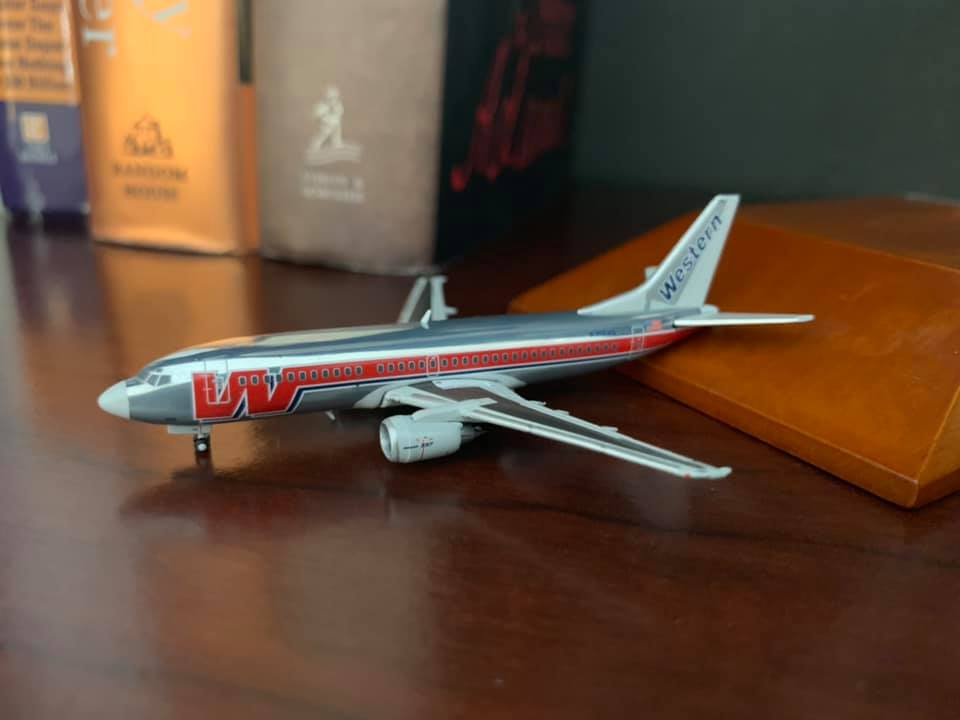 I’ve found most 737-300 models in 1/400 are terribly tail heavy, and therefore, tend to lean back on their tail when put on display.  The only ones I haven’t noticed this with are the original Dragon Wings mold (the New York Air example comes to mind).  In terms of the mold itself though, Gemini has the best one.  It is far more accurate and detailed that Dragon Wings was, or even Jet-X or Aeroclassics at that.  It also has a good heft to it as well and is solid metal through and through (unlike Dragon Wings).  The engines are (for once) properly sized and shaped to scale with the model, and the landing gear is correctly sized with the tires not oversized.  There’s quite a few molds out there that suffer from that (the original Gemini Jets 707’s for example).   The cockpit windows and window rows are properly placed and printed correctly as well (again, this seems to be a big issue with the 1/400 scale).  The livery is perfectly placed and in the exact shades it should be.  All in all, despite the tail-heavy tilting, it’s a fantastic model, worthy of being picked up by ANYONE into the classic airlines of yesterday. 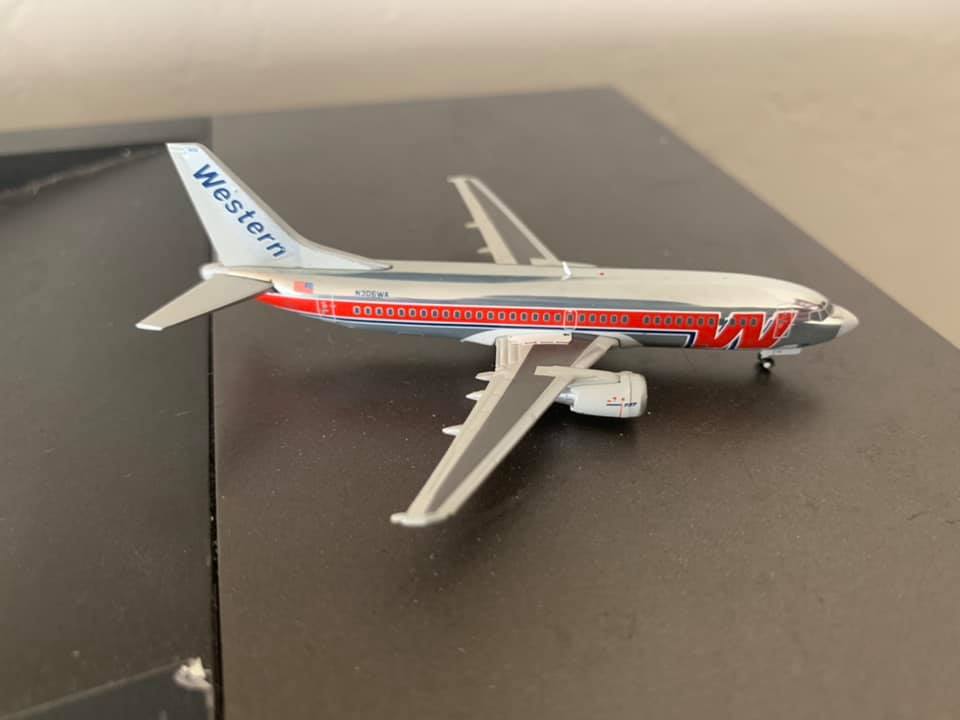 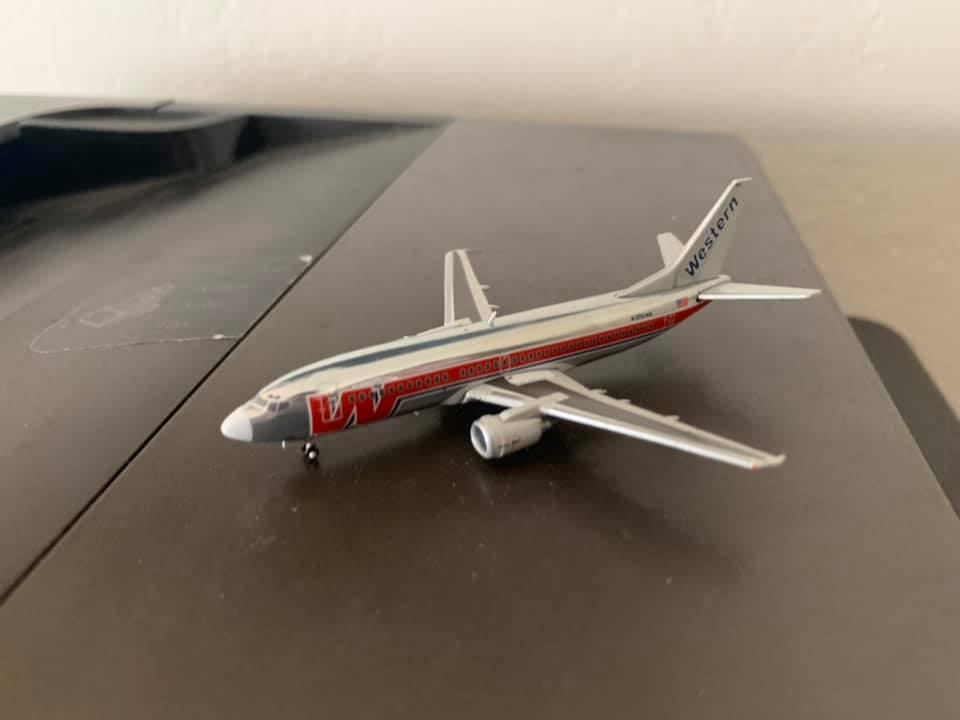 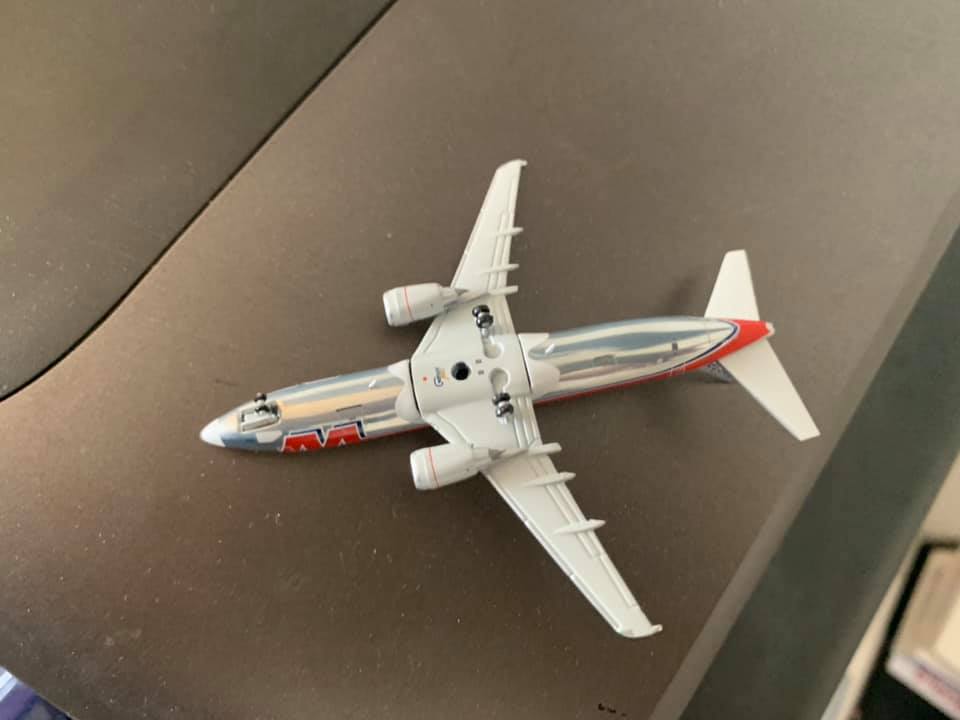 My absolute favorite thing about Gemini Jets models is the packaging.  On the 1/400 models, you lift the top cover up to reveal the model, and the inside of the cover details the history of the aircraft type, and also includes pertinent information about the particular aircraft itself, such as delivery date, line number, etc.  It’s very cool packaging indeed, something I wish they would’ve done with the larger Gemini200 1/200 scale model line as well.  Ah well, maybe in the future?  Just something to think about, dear ADI (the folks who make Gemini Jets). 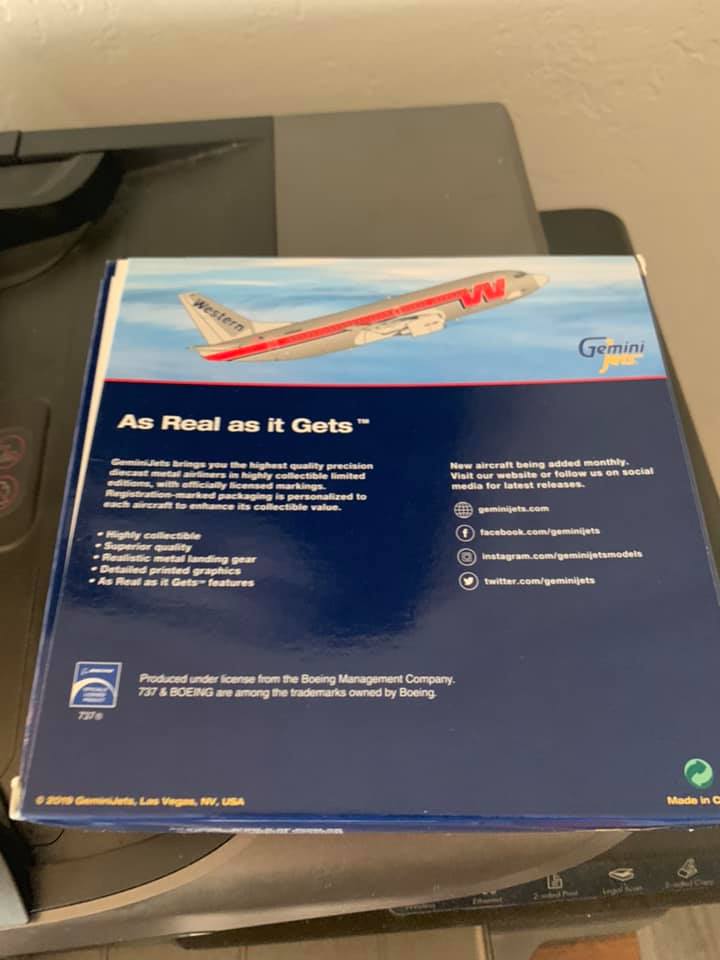 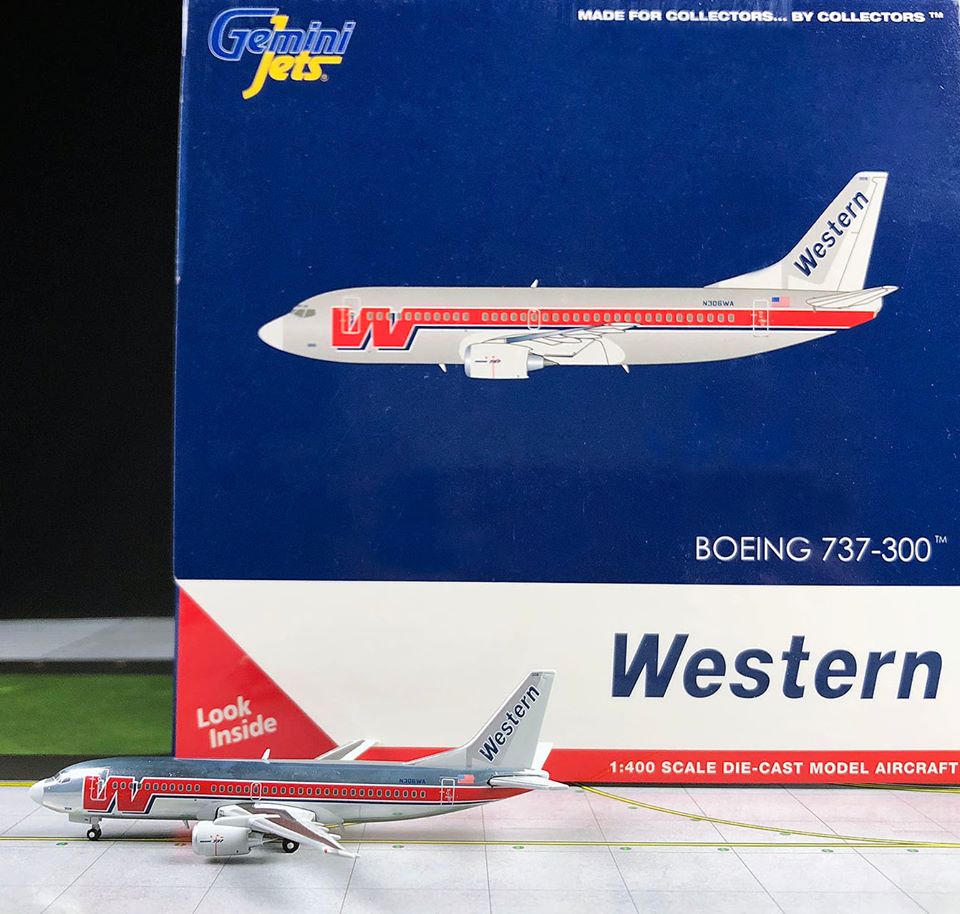 Speaking of the aircraft itself, N306WA was the 8th Boeing 737-800 delivered to Western Airlines, the 1,173rd Boeing 737 off the line, first flown on November 18, 1985; and delivered to Western just a few weeks later, on December 6.  She flew with Western for a little over a year when Western was fully merged with Delta Air Lines on April 1, 1987; where she flew faithfully and reliably until she was retired and withdrawn from use in May 2006 and met the scrappers torch in May 2007.  Delta’s 737-300’s were my favorite aircraft to fly on, and aside from a few examples, all of the former Western birds (and a pair of ex-Western Pacific logojets) stuck to the Salt Lake City hub during their tenure.