I first learned about the Convair 880 when I was in elementary school and read a library book titled The World’s Worst Aircraft written by James Gilbert.  There are two other books with the same title written by Bill Yenne and Jim Winchester.   The Gilbert book has a chapter dedicated just about the Convair Jetliners.  Mechanically and design wise the planes were very good but financially they were an utter failure for General Dynamics. 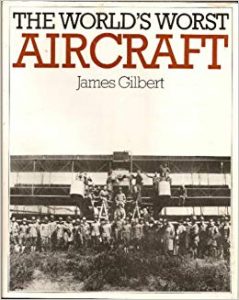 General Dynamics had purchased the Convair Corporation in March of 1953. The Convair division began development of a medium-range commercial jet in April 1956 to compete with both the Boeing 707 and Douglas DC8.   Initially the design was called the Skylark, then Convair 600 and finally the 880. 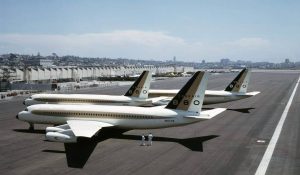 The numbers referred to the plane’s top speed of 600 miles per hour and 880 feet per second.  The plane’s first flight was on January 27, 1959.  The FAA mandated additional instrumentation for the plane for which Convair added the hump along the top of the fuselage.  Convair 880 sales were not successful and production ended just three years later. 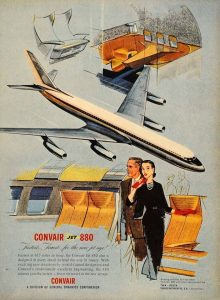 The Convair 880 offered five abreast-seating in contrast to the six abreast seating of the 707 and DC8.  Boeing also outcompeted Convair by offering the 720 medium range version of the 707.  The Convair 880’s General Electric CJ-805-3 turbojets had a higher fuel consumption rate than that of the Boeing 707 Pratt and Whitney JT3Cs. TWA and Delta both placed initial orders for the first forty Convair 880 aircraft. 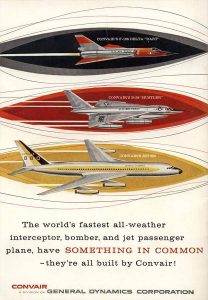 Convair promised the first forty delivery slots to both airlines which likely further discouraged other airlines from ordering the type.  Final assembly of the aircraft was at the Convair plant in San Diego California.  General Dynamics lost approximately $185 million dollars over the short lifetime of the Convair 880 and 990 programs.  At that time the losses were the greatest incurred by any corporation.  Only sixty five Convair 880’s were produced. 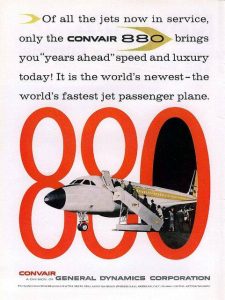 During the time of Convair 880 production Boeing built and sold three hundred sixteen 720 and 707 airliners.  Howard Hughes was the majority stockholder of TWA at the time and he played a major role in the Convair 880 program.   Hughes wanted TWA to have a faster jet than any other airline.  TWA initially ordered sixty two of the 880’s and purchased thirty of them.   The purchase agreement was not beneficial for TWA in that Hughes purchased the aircraft through his Tool Company and leased them back to the airline for an inflated price.  Minority shareholders of TWA sued and Hughes ended up losing control of TWA because outside creditors did not want Hughes controlling both development and operation of the aircraft. TWA operated Convair 880s from 1961 to 1974. 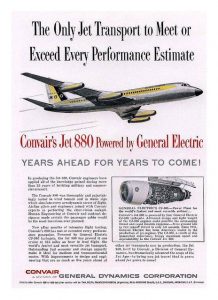 Convair initially used ship one N801TW for test flights. The plane entered service with TWA in 1964 and flew until 1973 when it was stored at Kansas City.  In 1978 the plane was sold to American Jet Industries and ferried to Harlington Texas.  It was then ferried to Mojave California in 1980. In 1990 the cockpit was refurbished and painted in Delta colors by Delta Technical Operations employees.  A portion of the fuselage was shipped to Minneapolis MN for a film about the Sioux City DC-10 crash. The remainder of the aircraft was scrapped.  The cockpit was put on display at the Heritage Row Museum at Underground Atlanta.  Heritage Row closed in 1997 and the cockpit remained on display at the Atlanta Convention and Visitors Center. It was moved to the Delta Museum in 2015. 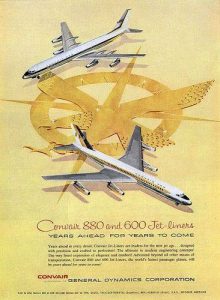 My Convair house colors 880 is the second 880 model that I have built.   This kit is by Microscale.   Per Jim Striplin and Jim Lund the molds were originally by Allyn and later Topping. Microscale released their kit in 1975.   The kit is very simple having approximately six parts in addition to a two part stand.  The kit included decals for Delta, Civil Air Transport, and TWA.   Jim Lund gave me his well-worn kit in Civil Air Transport markings.  I stripped the decals off, sanded down a considerable amount of paint, re-scribed the control surfaces and primed the model. 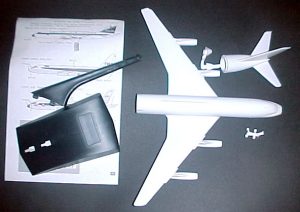 Around the same time Vintage Flyer decals released new decal sets which included the Convair house colors so I decided to give them a try.   I painted the model gloss white and the nose gloss black.   I painted the engine intakes Tamiya gloss aluminum.   Since the kit was a “hand me down” I didn’t have a stand so I made one from a wooden trophy base and acrylic rod.  I bent the acrylic rod to shape in almost boiling hot water.   The original model may have had exhaust noise suppressors which I faked using styrene rod painted dark metallic. I also had a plaque made at a trophy shop for the base which adds a nice touch.  My only complaint about the kit as well as the Hawk/Glencoe release is that the horizontal stabilizers are missing the counter balances.   One could add them but I chose to leave my model as is. 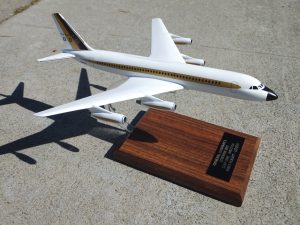 I’d known about the Microscale kits but was never willing or interested in paying collectors prices for one.  Having a donated kit the unique Convair house colors decals available sealed the deal for me to build one.   The markings, kit, stand, and plaque all turned out to make a very nice model of Convair 880 ship one.