Around the world in 80 Planes

We all have had that defining moment when we became captivated by aviation.  For some, it was their first flight. For others it was watching long white jet contrails high overhead. For me, it was my first trip to Kennedy International Airport.

It was the early 70’s and the Jumbo jet age was really beginning to surge. My family and I were seeing off my older sister who was heading off to India for a two year project.  From my vantage point at the Pan Am building, I gazed out over the airport ramp for the first time.  I marveled at the multitude of sparkling, brand new, 747’s arriving, loading, or departing at the International Arrivals Building (IAB).  Beacon lights and strobes were a kaleidoscope of color.  Freshly painted tails that were bright blue with the Star of David of El Al, large stylized Green A’s with red accents of Alitalia, and the unmistakable red cross and bandit mask of Swissair.  And there other lesser known jumbos,  but equally exotic,  including Air India, TAP, Sabena, Pakistan, Viasa, KLM, Alia Royal Jordanian, Royal Air Maroc, and Varig.

How they all intermingled and operated in that tight space was mesmerizing. I vaguely remember saying goodbye to my sister as I preferred wandering the terminal gazing out at the 747 activity and at the departure boards, while absorbing the dizzying number of destinations flickering by.  The announcements for boarding to Paris, London, Rome, Frankfurt, Madrid, Lisbon, Milan, Tel Aviv, and Casablanca combined with the liveries of the regal ships transporting hundreds of people to those locations, was intoxicating.

Since we lived on Long Island, as soon as I had my driver license, my trips to JFK became more frequent and lengthy.   My career choice was easy.  I would work in aviation for the rest of my life.  After graduating with an Aviation degree from Florida Institute of Technology, I worked for Pan Am, PEOPLExpress, Continental, and United, I ultimately retired after 35 years in the airline industry.  Today I work for ABM, a service provider to airlines and airports.

Over the years, when I had a little discretionary income, I would purchase small 1:500 scale airline models (mostly Boeing 747’s).  I was amazed that they had such detail due to a process called “tamp” printing.  My collection of 747’s grew.  However- keeping them in a storage box just didn’t seem fair.  They needed to be displayed in a way that I, and others, could appreciate their beauty.

Second to my love of aircraft, I was very interested in how airports accommodated these big behemoths’.  A trip to the new Hong Kong International Airport cemented a new vision and goal.  Taking a page from the model railroad hobby industry, I would build a 1:500 scale replica of the airport and display my aircraft as a miniature reminder that the precision and technical aspect of this world could also look beautiful, and might inspire a new generation of aviation enthusiasts.

I started with a large rigid, but thin, foundation board, and painted it a light ramp gray. I measured out the terminal size and realized I would need four of these boards!  This was going to be big! I studied many aerial shots of HKG and the unique positioning of jet bridges, parking stands, taxiways, and runways.

I built the terminal with wood and a flexible cardboard to simulate the stylized curved roof.  I found myself wandering through hobby shops and looking for simulated grass and racing tape.  The grass was installed between the taxiways and runway and the speed tape was used to create the lead in and taxi way lines.  I even re-created the ramp stains that result from spills and activity at a busy airport.

The first time I set the whole airport up with aircraft models, it took me right back to that day in the early 70’s, when as a kid, I remember that view of the 747’s with their explosion of color and design. Maybe that’s why I was so driven to complete this project.  It was a reminder of how I fell in love with aviation, as well as a simpler time.

We called the diorama “Around the world in 80 Planes”.  My son and I ended up entering the airport diorama in an art show at the Orlando International Airport and hey, we were awarded First Place!  The award simply validated that I, like many other Aviation buffs, love the business and appreciate it not only as a technical marvel, but also as a true art form. 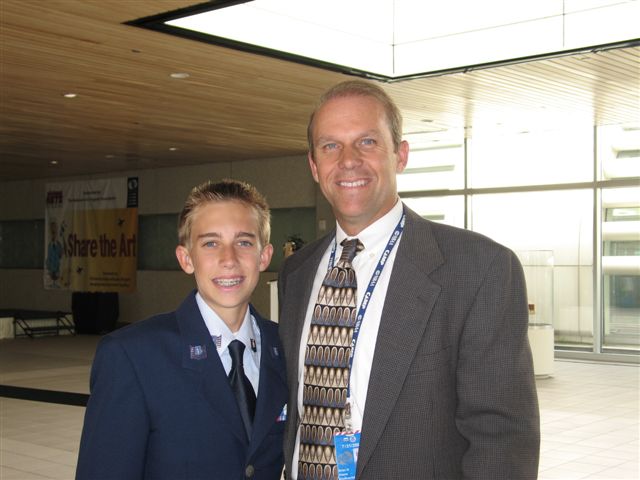