American Airlines, as we know it today, first appeared as such in 1934 after E.L. Cord of automotive fame acquired American Airways and renamed it. They worked closely with Donald Douglas to develop the DC-3, the first airplane to carry passengers at a profit without subsidy for mail handling. They were instrumental in establishing LaGuardia Airport.

I shall look at the etiquettes they issued prior to the post-war acquisition, in 1948, of American Export Airlines to form American Overseas Airlines, sold to Pan Am in 1950.

All American Airlines labels were either arrow-shaped or a horizontal hexagon. The first appeared in 1937, claiming “Tomorrow’s Mail Today.” This slogan appeared on all but two of the 8 and two of those in Spanish (Figures 6 & 7 which differ in the size of the lettering). The first four separated “American” and “Airlines” with their flying eagle logo (Figures 1-4); thereafter that logo was omitted.

The first of the two covers I show is from Chicago in 1939 to San Francisco and forwarded within that city, using the first etiquette produced (Figure 9). The 16¢ stamp paid the 6¢ airmail postage and the 10¢ special delivery fee. The second, a postcard, was sent from Mexico using the Spanish-language label. (Figure 10)

The study of American Airlines etiquettes can be extended to include their many early subsidiaries as well as those issued after the War. The last etiquette appeared in 1962. 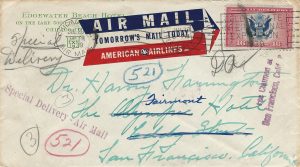