The launch of modern commercial jets in the late 1950’s are early 1960’s revolutionized air travel. Likewise, the jet age also brought a significant change in Safety Card design and use.

Prior to the jet age, the vast majority of safety cards were geared towards water evacuation and use of life vests. However, these cards were usually limited for aircraft used in trans-oceanic operations. As a result, for aircraft used primarily overland, safety information was usually just a few small paragraphs in a “Welcome Aboard” type booklet or part of a route map.

In this article, we illustrate examples of safety cards issued for the first jets operated by major airlines of the time. The majority of cards featured were issued between 1959 and 1963. 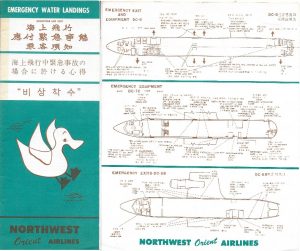 This Northwest Orient EMERGENCY WATER LANDINGS from 1960 features their newly delivered DC-8 as well as DC-6 and DC-7.   The DC-8 was short lived with NW and were replaced by Fan-Jet 707’s by 1963 for trans-pacific operations.  This card was an extension of the”Ditching cards” used in the 1950’s.  In fact, NW used this design from the early 1950’s DC-4 operation and continued to the 707 and 720 fan-jets. 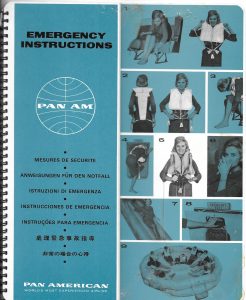 Pan American’s first safety card for the 707 was this large plastic bound card showing basic emergency exit procedures. Interestingly, it is lacking aircraft floorplans. The assumption is this was done to cover both 707 and DC-8 services. The card makes no specific reference to a B-707 or a DC-8.

TWA’s first card for the 707 featured a basic layout with a detailed floorplan.  It is interesting to see how much of the plane was dedicated to First Class in the early glamour days of Jet travel. 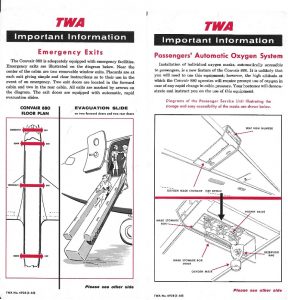 TWA’s first Convair 880 followed the same layout as the 707. Many of the early jets did not show how to open the exits.  On the Convair Jets, we can guess this may had something to do with the types notoriously heavy swing out doors. 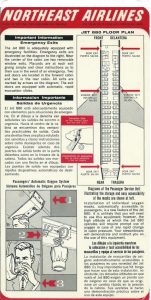 Northeast Airlines first owned jet was also a Convair 880 .   The format followed close to TWA’s early cards of the era.  As TWA did  most of the heavy maintenance on the NE 880’s it makes sense that they would borrow TWA’s look.

American’s first 707 card had a similar look to TWA, but with a slightly different layout.  The 707 was the only aircraft type featured in this design.   I would think similar cards may exist for the 720 and Convair 990, however I have not seen any. 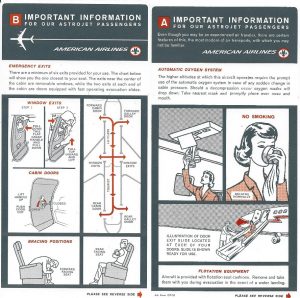 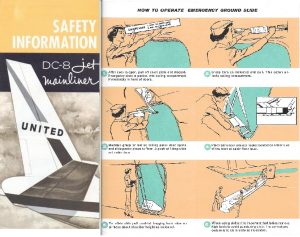 In my opinion, United had the nicest cards of the U.S. carriers for their early jets.   This DC-8 card featured a nice tail drawing on the cover.  An interesting feature of early jets is that the evacuation slides were often ceiling mounted and required extra handling to bring them into use.  From the mid 60’s onward, it was most common for evacuation slide to be housed in the door for automatic deployment. 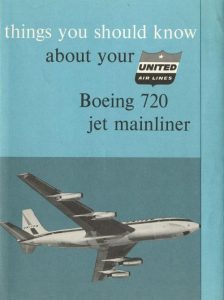 However, United’s first 720 card doesn’t even look like a safety card on the surface.  Instead, it only subtlety brings your attention to  “things you should know.” 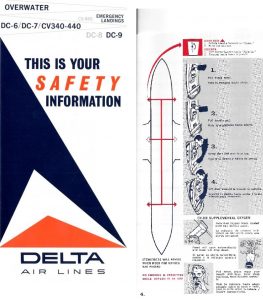 Apart from some basic life vest and oxygen use cards, Delta Air Lines did not have any true safety cards prior to the mid 1960’s.   The first known card to feature the Jets was this multi-fold card featuring all planes in the fleet.  There was also a large single card featuring  Delta fleet.  In the illustration above, I have included the panel for the Convair 880.  This card was probably quite confusing for the typical traveler.  In 1967, the FAA adopted a regulation requiring each individual aircraft type to have its own safety card. 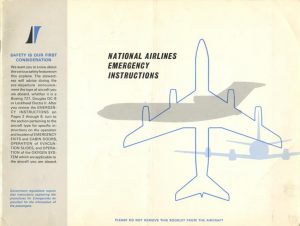 National was another airline that used a fleet card  for early  jets. This example features the DC-8, 727 and Electra.  Prior to this there was a basic two-sided card from 1963 that showed only the exit location without any instructions.  One side was the DC-8, the other side featured the Electra.

Going North across the border, Trans Canada also had a fleet card booklet.  This card features several variants of the DC-8 and Vanguard.  Surprisingly, the Viscount was not included in this series of cards.  Take note of the Trans Canada mascot, Mr. Beaver, on this card.

Across the pond to England, BOAC issued many cards featuring the early jets.  Early BOAC jet cards were all fleet cards, but did feature aircraft floorplans. To my knowledge, there are no cards featuring the ill-fated Comet 1.  The above example shows the 707, Comet 4 and the big props of the time.

Iberia in Spain issued this simple card to welcome the DC-8 to the fleet.  Prior to this, Iberia often included their safety information with their Route Map pamphlets.

[Image from collection of Carl Reese]

The above example shows both of Lufthansa’s early Boeing jetliners.   The detailed floorplans and photographs of exits were a nice feature of early LH jet age cards. 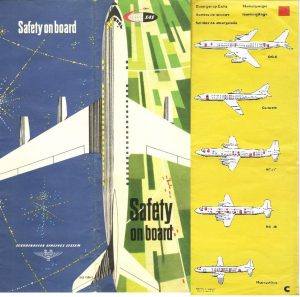 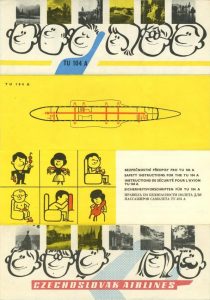 Safety cards of First Generation Russian passenger jets are quite rare.   Aeroflot, in fact did not issue safety cards with any regularity until the late 1970’s. The above example is a TU-104 card issued by CSA from Czechoslovakia. 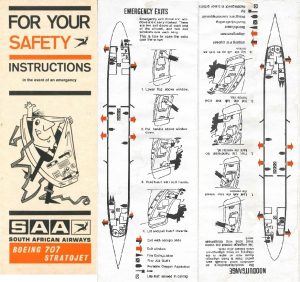 In Africa, South African Airways issued this comical cover design for its early 707 cards. This is the second version.  The card was issued in English and Afrikaans with opposite side printing for each language as shown by the exit plan. 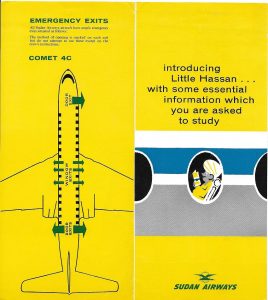 Also, from Africa is this unique card from Sudan Airways featuring it’s Comet 4. As Air India had the Little Maharaj as its mascot, Sudan Airways had Little Hassan.   This design was also used on a Viscount card. 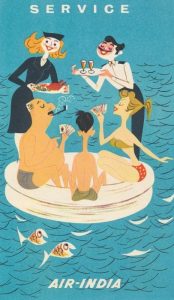 Air India’s first 707 Card was labeled Service and showed a group of travelers enjoy a gourmet meal service while lounging in a life raft.   Something tells me this image would not be politically correct in today’s world.

QANTAS, like Air India and SAA, also used a comical cover for it’s first 707-100 aircraft.  Using the Knight as a mascot,  I assume the suit of armor is to be symbolic of the sturdiness  of the modern jet ??

In Asia, Japan Air Lines had issued several Water landing/Life Vest cards for its prop operations.  However, the earliest DC-8 card we can find is this card from the late 60’s featuring three variants (-30/50, -61, -62).   There is also a CV-880 card in this format. 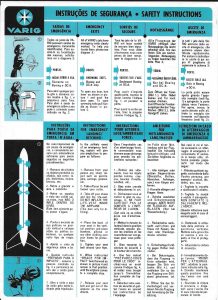 Finally, we venture to South America.  VARIG Brasil issued this thick plastic card which was used on board the Boeing 707 along with the DC-8 and Convair 990.  Note the over wing exit marked with an * indicating this exit was not on all aircraft.  (Convair jets only had one set of overwing exits)

LAN Chile issued this nice booklet.  While the image shows only the front and back cover, the interior pages had nicely drawn illustrations.

I hope you enjoyed the above selections.  I welcome any comments and additions to the theme of this article.