By the mid-1930s, Pan American World Airways (Pan Am) used Martin M-130 and Sikorsky S-42 flying boats to cover their their Caribbean and South American routes.

When passenger demand increased for trans-Pacific and Atlantic travel toward the end of the 1930s, Pan Am went to Boeing for a long-range flying boat. In response, Boeing developed the Model 314, nicknamed the “Clipper” after the great ocean-going sailing ships.

Pan American wanted a flying boat with an extraordinary range that could supplement the airline’s trans-Pacific Martin M-130. On July 21, 1936, Pan American signed a contract for six Model 314s. The first deliveries occurred in March 1939. The Model 314 was the largest civil aircraft in service at the time. 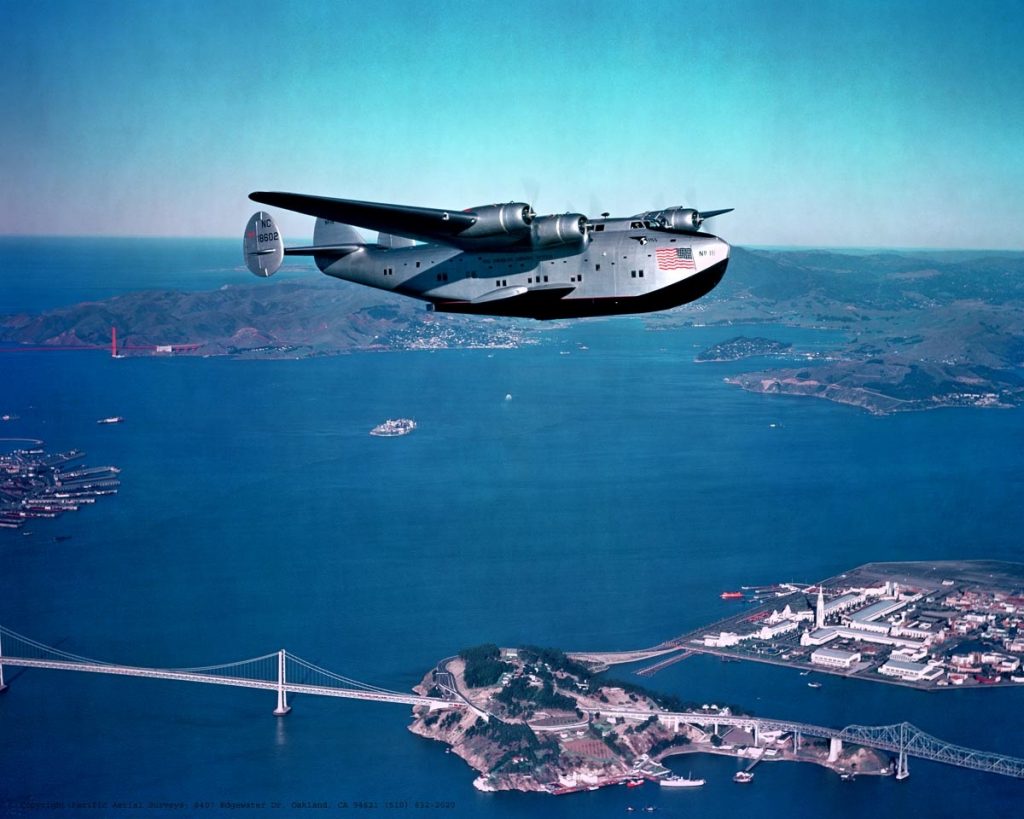 It was twice the size of the Sikorsky S-42, and outweighed the Martin M-130 China Clipper by 15 tons. The Boeing 314 weighed 40 tons and cost $550 000 per copy. Initially it had poor directional control due to the single vertical stabilizer. Boeing eventually settled on the triple-tail arrangement which became a feature of the design.

It had a central hull and adapted the experimental XB-15 bomber’s 149 ft. (45 metres) wing and engine nacelles on the flying boat’s large (for its day), whale-shaped body.

In the place of the traditional floating stabilizers at the wingtips, sponsons mounted on the sides of the hull were used. The sponsons were developed by Claude Dornier, and used on the Dornier Do X and Dornier Do 18. The sponsons also contained fuel tanks, which brought the capacity of the total fuel on board to almost 3,525 gallons (16 ,00 liters). 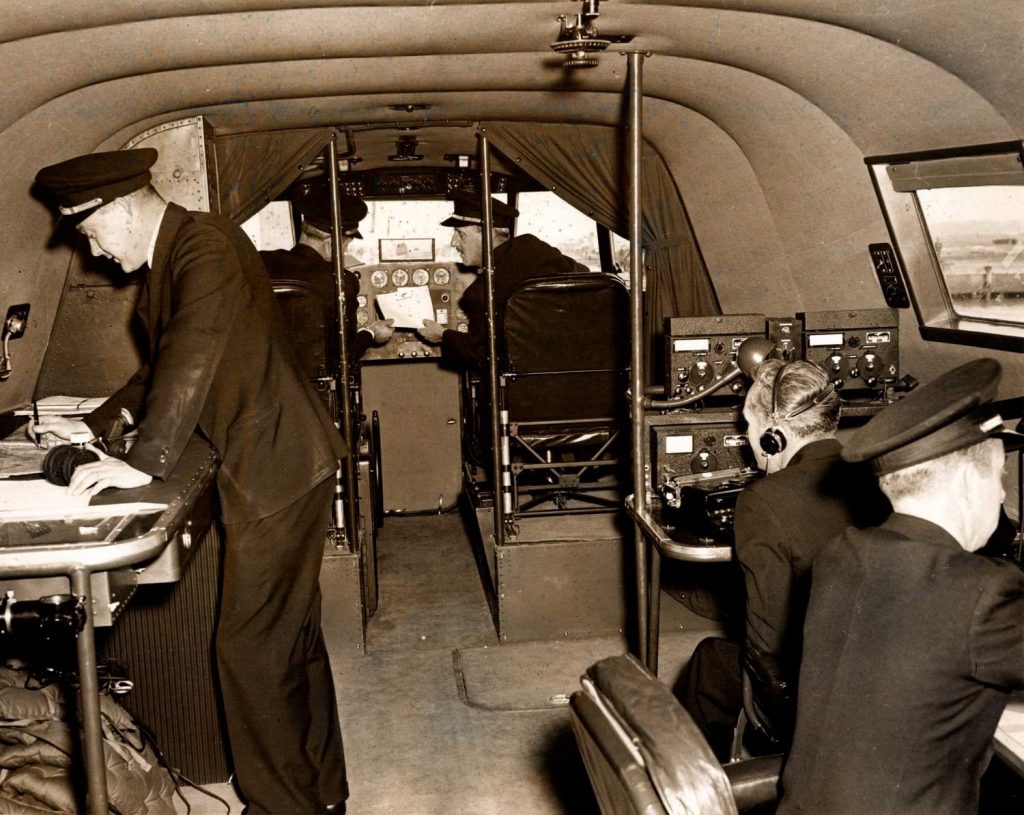 The new 14-cylinder double-row Wright 1,500 hp. Cyclones were the first to use 100-octane fuel. These engines on the 314A eliminated the lack of power that handicapped and ultimately canceled the XB-15 project.

Behind the upper-level flight deck were crew sleeping quarters and a giant baggage area. Between the two decks was a spiral staircase. The lower deck included a dining salon, cocktail lounge, and separate lavatory-dressing room facilities for men and women. The ultimate bow to the first class traveler was a bridal suite. One less publicized feature was the first flush toilets ever used on a transport aircraft.

On May 20, 1939, Pan American inaugurated the first transatlantic mail service. Almost a ton of mail was carried from Port Washington, N.Y., to Marseilles, France, via the Azores and Lisbon, Portugal, in 29 hours. The same aircraft opened the northern mail service to Southampton, UK on June 24, 1939.

The 314 had a 3,500-mile range and made the first passenger-scheduled trans-Atlantic flight on June 28, 1939. By the year’s end, Clippers were routinely crossing the Pacific. Passengers had a spacious lower deck that allowed seating for 74 daytime passengers on trips less than 1,000 miles over water, or 36 to 40 passengers in reclining seats for long overnight flights. 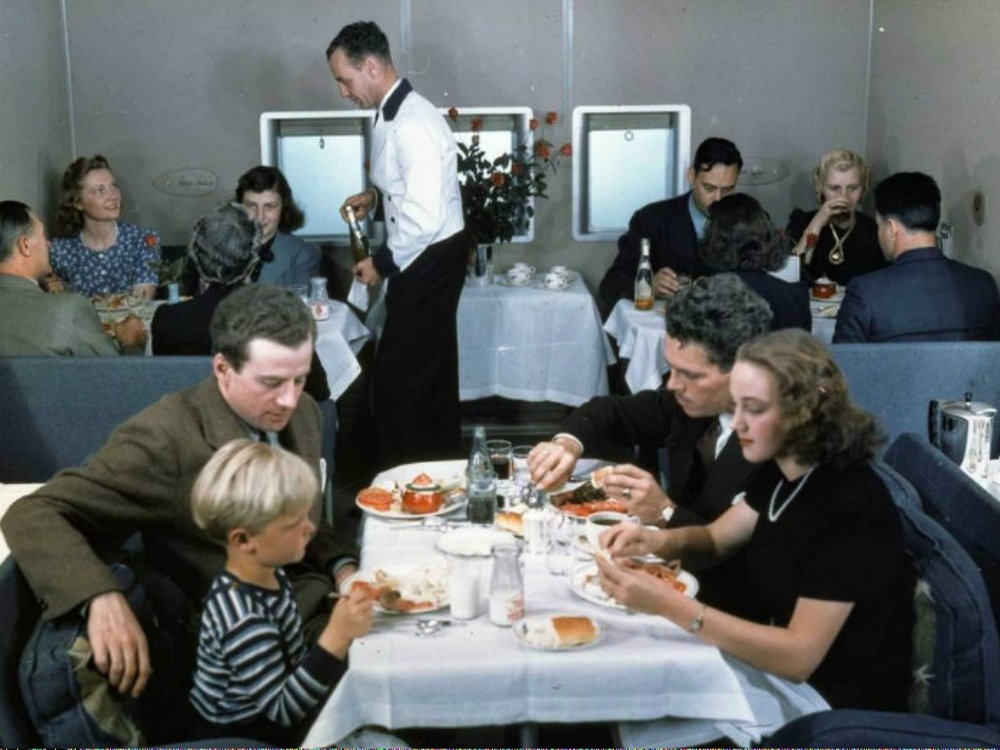 White-coated stewards served five and six-course meals on china with gleaming silver service. The standard of luxury on Pan American’s Boeing 314s has not been matched on heavier-than-air commercial transport since then. (Photo Boeing Archives)

Pan Am’s “Clippers” were built for the “First Class traveler,” a necessity given the long transoceanic flights. It had a cruising speed of 188 miles per hour (303 km/h), but typically flights at the maximum gross weight were flown at 155 mph (249 km/h). In 1940, Pan Am’s San Francisco, to Honolulu, Hawaii, the route took 19 hours.

The 314s had galleys crewed by chefs from five-star hotels. White-coated stewards served five and six-course meals on china with gleaming silver service. The standard of luxury on Pan American’s Boeing 314s has not been matched on heavier-than-air commercial transport since then. This was travel for the super-rich, priced at $675 from New York to Southampton, UK (comparable to a round trip aboard Concorde in 2006). Most of the flights were trans-Pacific, with a one-way ticket from San Francisco to Hong Kong via the “stepping-stone” islands costing $760 (or $1,368 round-trip)

The 314 proved to be an excellent airplane. The XP–15 wing design increased the range t0 3,500-miles. It was a huge wing that not only gave the 314 the incredible range, but also the capability of making some in-flight repairs on the engines. Like the XP 15, there was a passageway inside each wing through which a crew member could crawl. 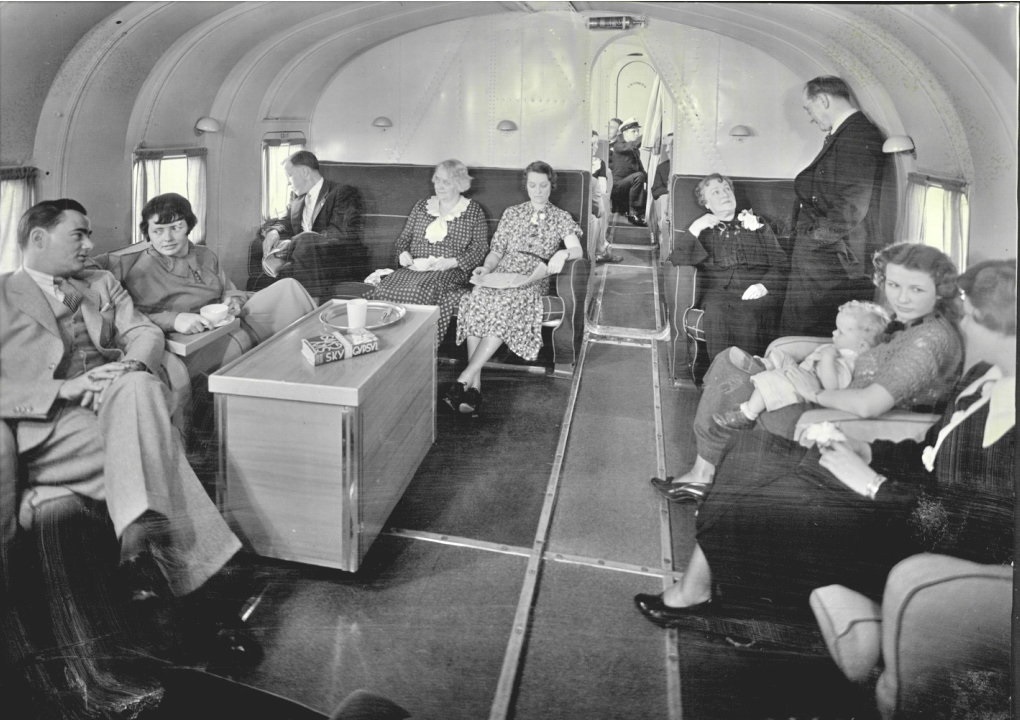 On September 3, 1939, the golden age of the clipper ships came to a dead stop with the outbreak of World War II in Europe. The war curtailed Pan American’s opportunity to build on its success, and the northern trans-Atlantic route was abandoned on October 3, 1939.

The Clipper fleet was pressed immediately into military service for the war effort. The flying boats were used for ferrying personnel and equipment to the European and Pacific Theaters. The aircraft were purchased by the War Department, and leased back to Pan Am for a dollar.

Few other aircraft of the day could meet the wartime distance and load requirements. President Franklin D. Roosevelt traveled on Dixie Clipper to meet with Winston Churchill at the Casablanca conference in 1943. 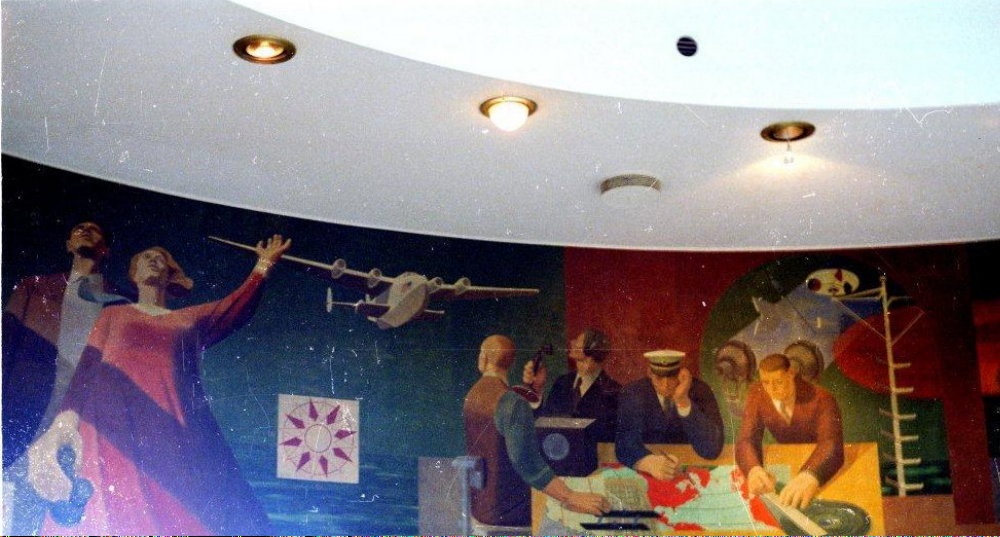 On the Marine Air Terminal interior wall is a mural representing the history of flight. The last mural depicts the Clipper ships and the crew plotting their flight. At that point, 1939, the Clipper represented the latest in aviation technology. (Photo Henry M. Holden)

The Clippers had long legs. American military cargo was carried via Brazil to Liberia, to supply the British forces at Cairo, and to the Russians, via Teheran. The 314 was then the only aircraft in the world that could make the 2,150-statute-mile (3,460 km) crossing over water, and was given the military designation C-98. Since the Pan Am pilots and crews had extensive expertise in using flying boats for extreme long-distance over-water flights, the company’s experienced pilots and navigators continued to serve as a civilian flight crew.

With the success of the Boeing 314, Pan American ordered six more aircraft with increased engine power and passenger capacity, as the Boeing 314A, to be delivered in 1941.

Initially, the goal was to double the service on both the Atlantic and Pacific routes. However, the fall of France, in 1940, caused some doubt about whether the Atlantic service could continue. Passenger numbers were declining due to the war, and if Spain or Portugal joined the Axis, then the flights to Lisbon would end. 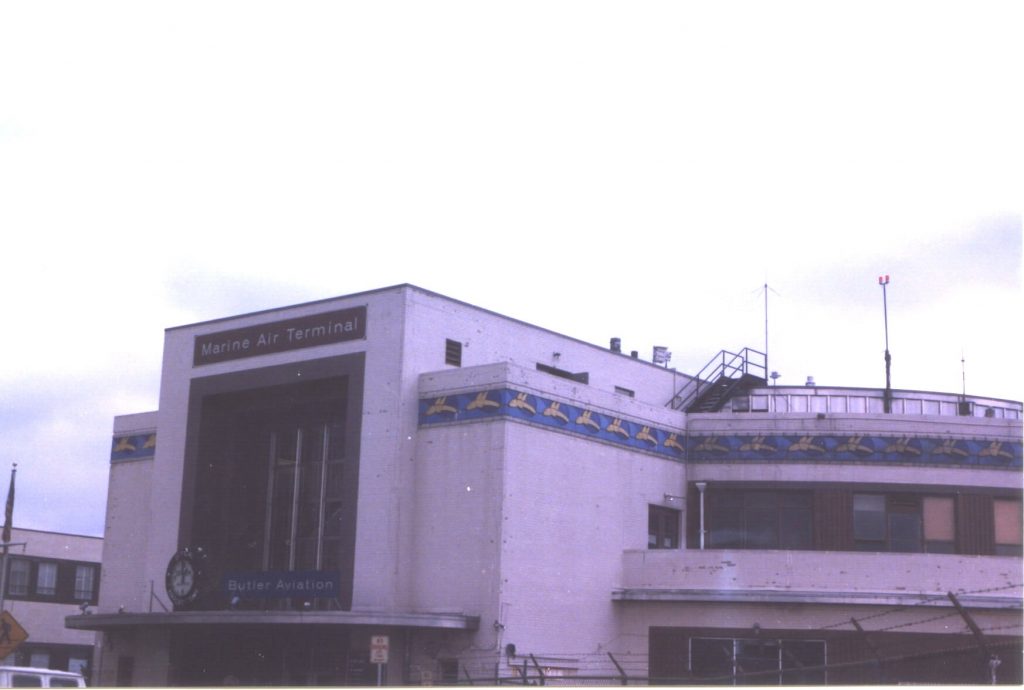 LaGuardia Airport, in New York City, was the clipper’s east coast operating base. A special building, the Marine Air Terminal, built in 1939, was for clipper passengers. The flying fish on the side of the building represented the Clipper ships. (Photo Henry M. Holden)

The 314A was a great improvement, it had increased fuel capacity of nearly,1 000 gallons (4,500 liters). The first 314A flew as a prototype on March 20, 1941, but with WW II raging, only half the order went to Pan Am. Three were bought by the British government and allotted to British Overseas Airways Corporation (BOAC) for use as transport aircraft, primarily intended for the UK – West Africa route. The sale made a small net profit for Pan Am – priced at cost plus five percent – and provided a vital communications link for Britain. Churchill later flew on Bristol Clipper and Berwick Clipper, which he praised strongly, adding to the Clippers’ fame during the war.

Twelve Boeing 314 Clippers were produced by the Boeing Airplane Company between 1938 and 1941. Of the 12 three were lost to accidents, although only one of those resulted in fatalities: 24 passengers and crew aboard the Yankee Clipper died in a landing accident, in Lisbon, Portugal, on February 22, 1943. Among the fatalities was a prominent American author, and war correspondent, Benjamin Robertson. American singer and film actress Jane Froman was seriously injured. Two more Clippers were sunk in collisions with rescue ships after being forced to land due to engine trouble. 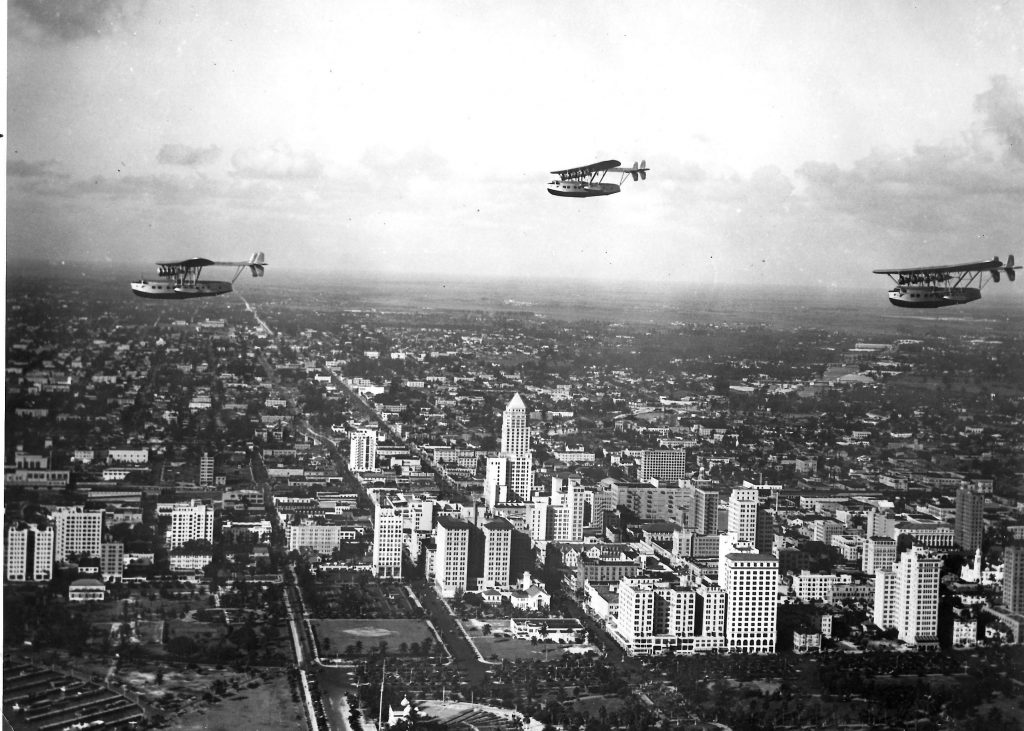 Three Pan American Airways S-42s over Miami Beach, Florida. When passenger demand increased for trans-Pacific and Atlantic travel toward the end of the 1930s, Pan Am went to Boeing for a long-range, four-engine flying boat. (Photo Florida State Archives)

The last Pan Am 314 to be retired, the California Clipper, in 1946, had accumulated more than a million flight miles. All Pan-Am’s 314 were removed from scheduled service in 1946, and five serviceable B-314s were purchased by the start-up airline New World Airways. These sat at San Diego’s Lindbergh Field until 1950 when all were sold for scrap. The last of the fleet, the Anzac Clipper, was resold and scrapped at Baltimore, Maryland in late 1951.

BOAC’s 314As were withdrawn from the Baltimore-to-Bermuda route in January 1948, replaced by Lockheed Constellations flying from New York and Baltimore to Bermuda.

The Boeing clippers served Pan Am and BOAC well during their short careers. The advent of the four-engine land planes, which traded luxury for speed and greater operating economy, doomed the flying boats. The passing of the flying boat, however, was inevitable even before war broke out. The same Boeing engineering capability responsible for the advanced technology found in the clippers made their extinction predictable. For even as the 314 was being developed, so too was another prewar airliner with technology even more cutting edge, the Boeing 307 Stratoliner.