Please allow me to introduce myself as the successor to Fred Chan as Editor of the Playing Cards Section.

I worked for a major manufacturer of playing cards worldwide for 34 years.  In those 34 years I travelled about 5 million miles for the company visting all continents.

As a “professional disease” I started to ask for playing cards on the airplanes and consequently I had a nice collection before I got to know Trev Davis and Fred Chan through some collector friends.  Then the ball really started rolling and now my collection counts for over 4,000 different decks….

In my career I was also a platinum member of American Airlines for a several years so I have known this airline for a long time.

American Airlines was an early legacy carrier and has put out playing cards since 1944 (Figure 1).  In total so far American Airlines has issued, to our knowledge, 75 different decks of playing cards carrying the AA logo.  The subsidiary company American Eagle also issued 3 different decks of which the inaugural flight to Las Vegas is a tough one to find (see Figure 2).

AA always have been very strong in displaying their name and logo on the cards as shown in Figure 3 through Figure 8 .

Recently right after the US Airways merger, AA came out with a deck of playing cards which was a generic deck in a plastic case carrying the AA logo (Figure 9).  This was a disappointment to the collectors and not in line with the old style of issuing playing cards as part of their marketing campaigns ((see 242-A)) .

Another issue AA(L) recently came out with, was a joint deck with their global partner Qantas (Figure 10).

Also shown is the most recent known American Airlines deck, issued on 500 decks only, in a cooperation between the AA museum and one of the playing card collectors. (Figure 11?) 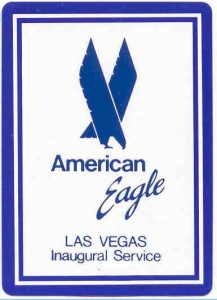 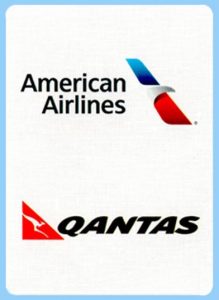