Golden West Airlines was the result of the initial merger of three local California commuter carriers; Cable Commuter, Skymark Airlines and Aero Commuter in March 1969 and only month later with the purchase of Golden West commuter based in Van Nuys, California did the airlines take the name of the former carrier to become collectively Golden West Airlines in May 1969. With a fleet of de Havilland DHC-6 Twin Otters and a few Beech 99s, the new commuter was flying a route network across Southern and Central California and advertised itself as the “Largest commuter airline in the world.” Within a year however, financial difficulties arose with such a large operation, and Golden West consolidated its operations to Southern California and its popular Catalina Island service using Grumman Goose aircraft. An attempt was made to provide helicopter service with the purchase of Los Angeles Airways (LAA) but this venture became cost prohibitive and was halted in 1972. 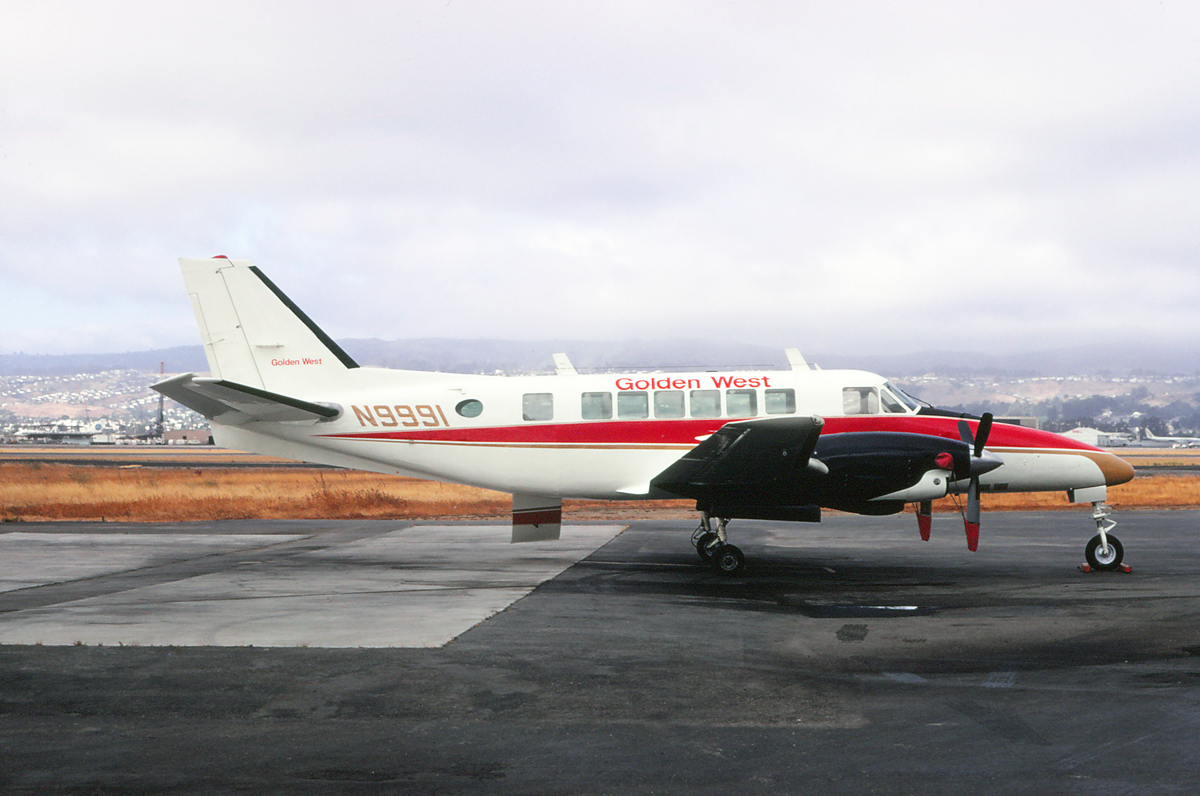 After the merger, Golden West flew a handful of Beech 99s acquired from Aero Commuter before returning the aircraft in 1970. Parked on the ramp at San Francisco International Airport in September 1971 is N9995, a Beechcraft B-99.

Parked on the ramp at Ontario International Airport in June 1973, is N66180, a de Havilland DHC-6-200 perfect for commuter flights between the various Los Angeles regional airports

By the mid-1970s, Golden West had established its hub of operations from Los Angeles International Airport and had hourly “shuttle” flights from both Ontario and Santa Ana-Orange County into Los Angeles-LAX. A well published mid-air collision took place on January 9, 1975 when a DHC-6 Twin Otter collided with a private Cessna 152 over Whittier, California resulting in the deaths of all parties. Although a bleak moment in the carrier’s history, passenger bookings continued to grow and Golden West took delivery of its first Shorts SH-330 “wide-bodied” aircraft in 1977 with seats for thirty and a need for a flight attendant, the first for the airline. 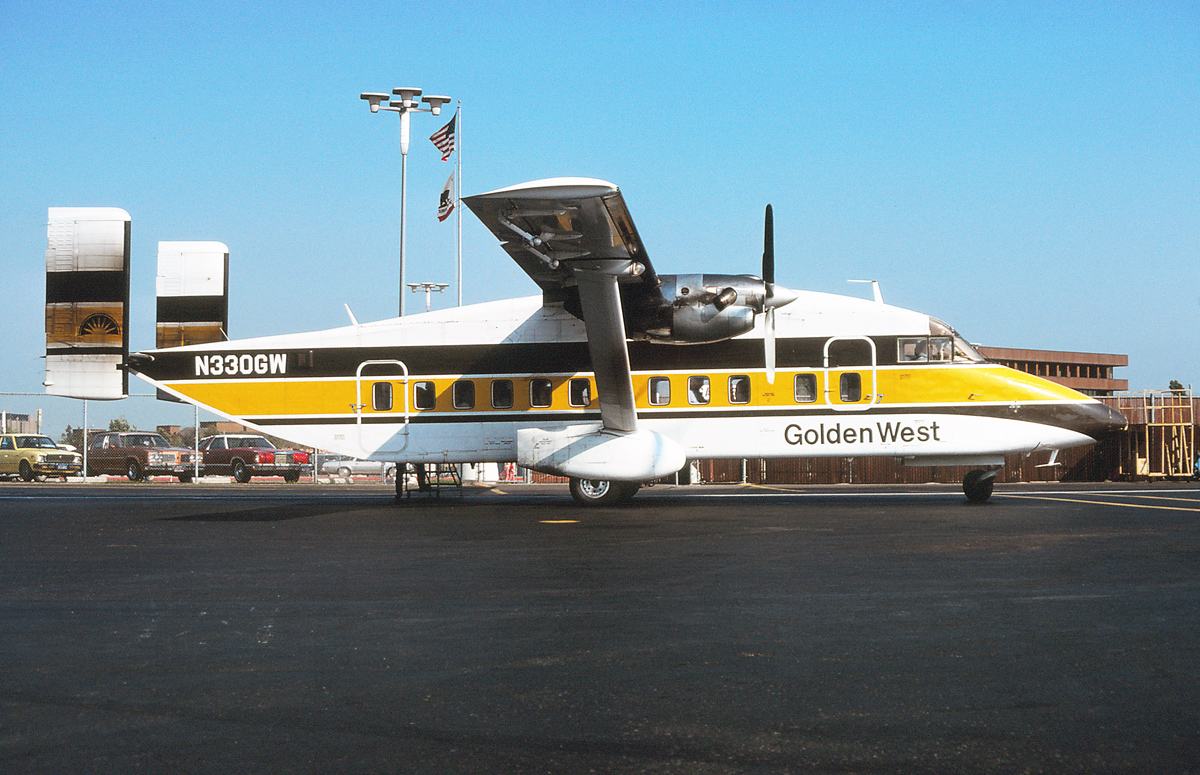 The introduction of the Shorts-330 in 1977 allowed Golden West to increase capacity on trunk routes. Parked at Santa Ana-Orange County Airport in April 1978 is N330GW, a Shorts SD330-100.

By 1980, Golden West was serving ten cities across Southern California including San Diego, Los Angeles, Santa Ana-Orange County, Palmdale, and Santa Barbara. With the dawn of a new decade, Golden West had its sights on continued growth and longer routes and placed an order for the new de Havilland DHC-7 aircraft which its first was delivered in March 1980. The new fifty-seat, four-engined turboprop would be used on popular routes into Los Angeles-LAX as well as placed on new services to Lake Tahoe airport in the Sierra Nevada Mountains.

Just after the delivery of the new de Havilland DHC-7 airplanes, Golden West unveiled a new corporate image showcasing the warm colors of a California sunset and soon repainted their aircraft in this eye-catching livery. Things continued to shine for the airline in 1981, as flights expanded to destinations in both Central and Northern California including services to San Francisco and Sacramento, cities that had been given up during the airlines consolidation in 1971. 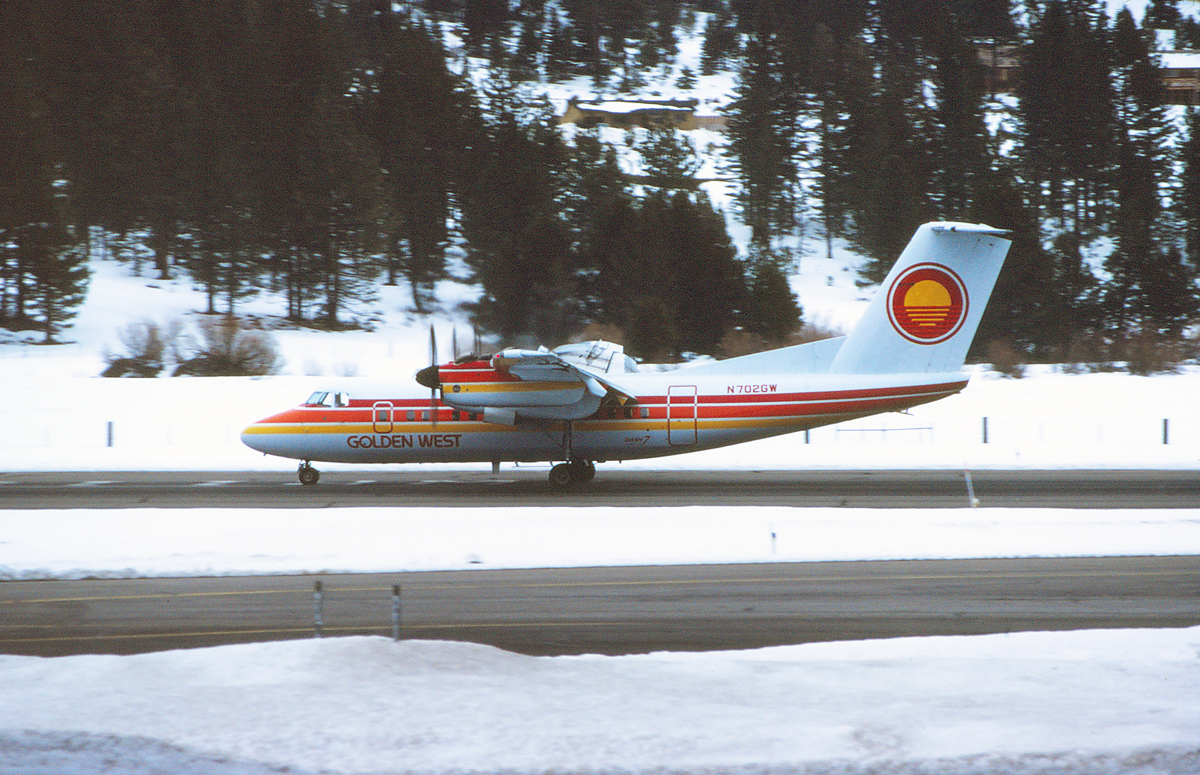 Lake Tahoe provided to be a popular year-round destination when service was started in 1981. Rolling out after landing at Lake Tahoe Airport in February 1981, is N702GW, a de Havilland DHC-7-102. 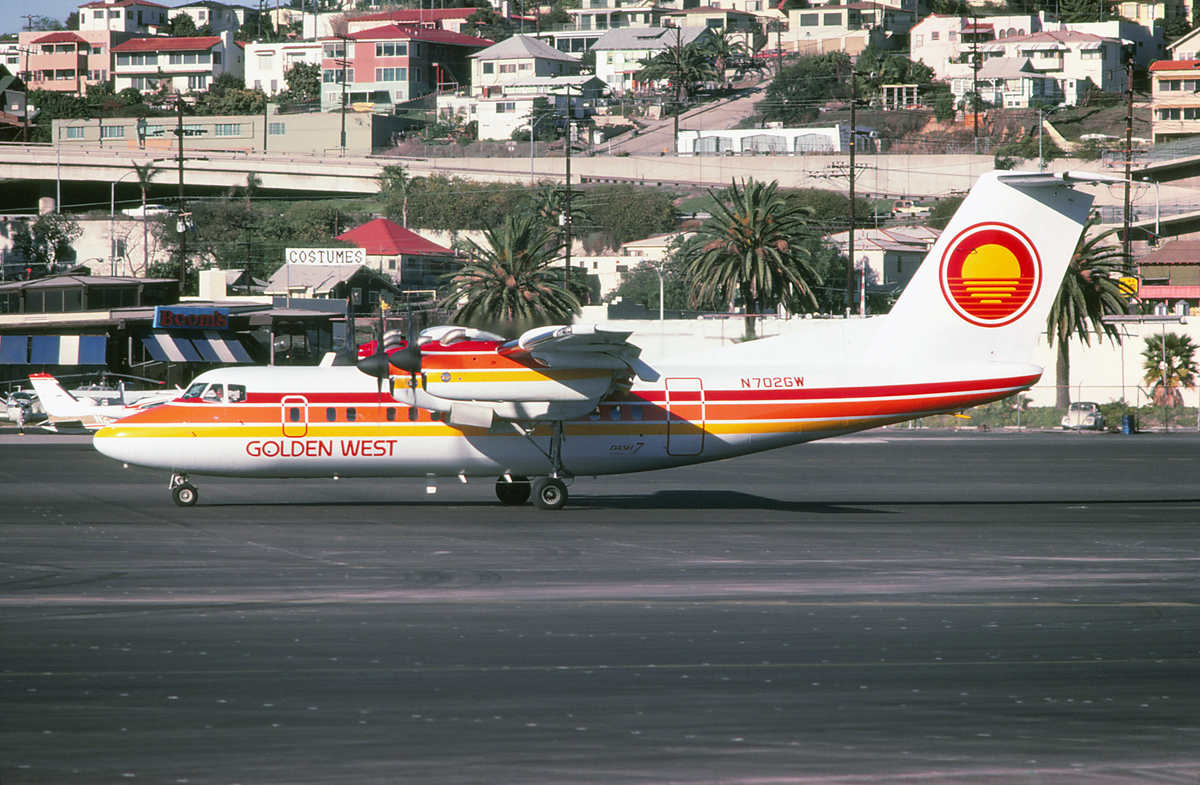 By 1982, Golden West had grown to serve eleven cities across California, with a fleet of sixteen aircraft and no less than one hundred daily flights. Code share agreements with almost all the airlines operating from Los Angeles, both domestic and international, allowed seamless connections and kept the airline popular amongst passengers. 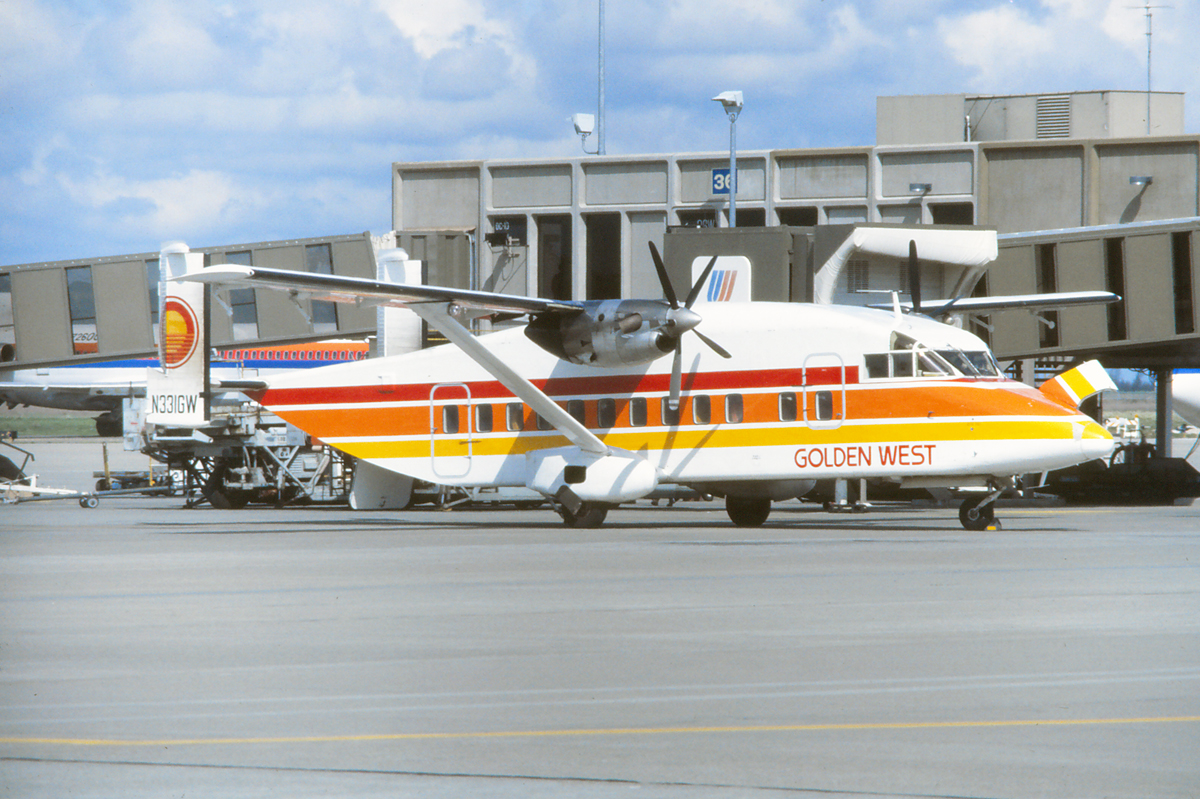 Even the Shorts got the new corporate colors as is evident on N331GW, a Shorts SD330-200, parked on the ramp at Sacramento International Airport in March 1983.

In an effort to modernize its future fleet, Golden West placed an order for three of the new de Havilland DHC-8 turboprops as well as considering the new British Aerospace BAe-146 to start jet operations. It was only a year later that Golden West started to suffer financial woes caused by the purchase of the new de Havilland DHC-7s as well as management changes that compounded the already struggling finances. There was the possibility of a minority purchase by Pan American Airlines (Pan Am) for $3 million to help get the carrier out of its mounting debt, however  this deal fell through and the airline continued to struggle until Friday, April 22, 1983 when the carrier was forced to shut down and  layoff all employees. Although there were plans to file Chapter 11 bankruptcy protection to allow for reorganization, this failed and the airline ceased operations, setting the sun on a carrier which had brought together the outlaying airports of Southern California and brought a ray of golden light to the millions of passengers making their convenient connections into LAX.