Many airlines, particularly on longer flights, have typically handed out beautiful menus in advance of their meal service.  One type of menu, popular in the past with certain airlines, served a double purpose – it had a postcard back, as the airline hoped the passenger would mail the postcard, and this would publicize the airline more widely.  Some of the early menu postcards even state on the back: “Please address and return to Stewardess, who will stamp and mail for you”.

Surprisingly few airlines actually issued menus in postcard form.  I know of only 17 airlines that did so, although probably more exist.  Also, at least three other airlines issued menus with postcards attached so they could be separated and mailed or saved.

The late 1940s through the early 1960s were the high point for the popularity of airline menus with postcard backs.  Some, however, date as early as the1930s and the latest I know of were issued by TWA in 1987.

All the postcards shown in this article are airline issued; standard or continental size; and from my collection except for those of B.O.A.C., Ghana, and South African Airways.

The airline that issued the most menu postcards, by far, was United Air Lines.  I estimate that more than 80% (and maybe 90%) of the menu postcards that you can find at airline collectible shows or on the internet are those issued by United.

So let’s start with menu postcards of United Air Lines.  United issued many types of menu postcards, including those celebrating special events, holidays or destinations, menus with suitable illustrations for breakfasts, and a lengthy set with photographs of United destinations.

Here are my three favorite United menu postcards.  I was fortunate to acquire them over 30 years ago from collector Randy Lieberman, and I have never seen other originals of each. 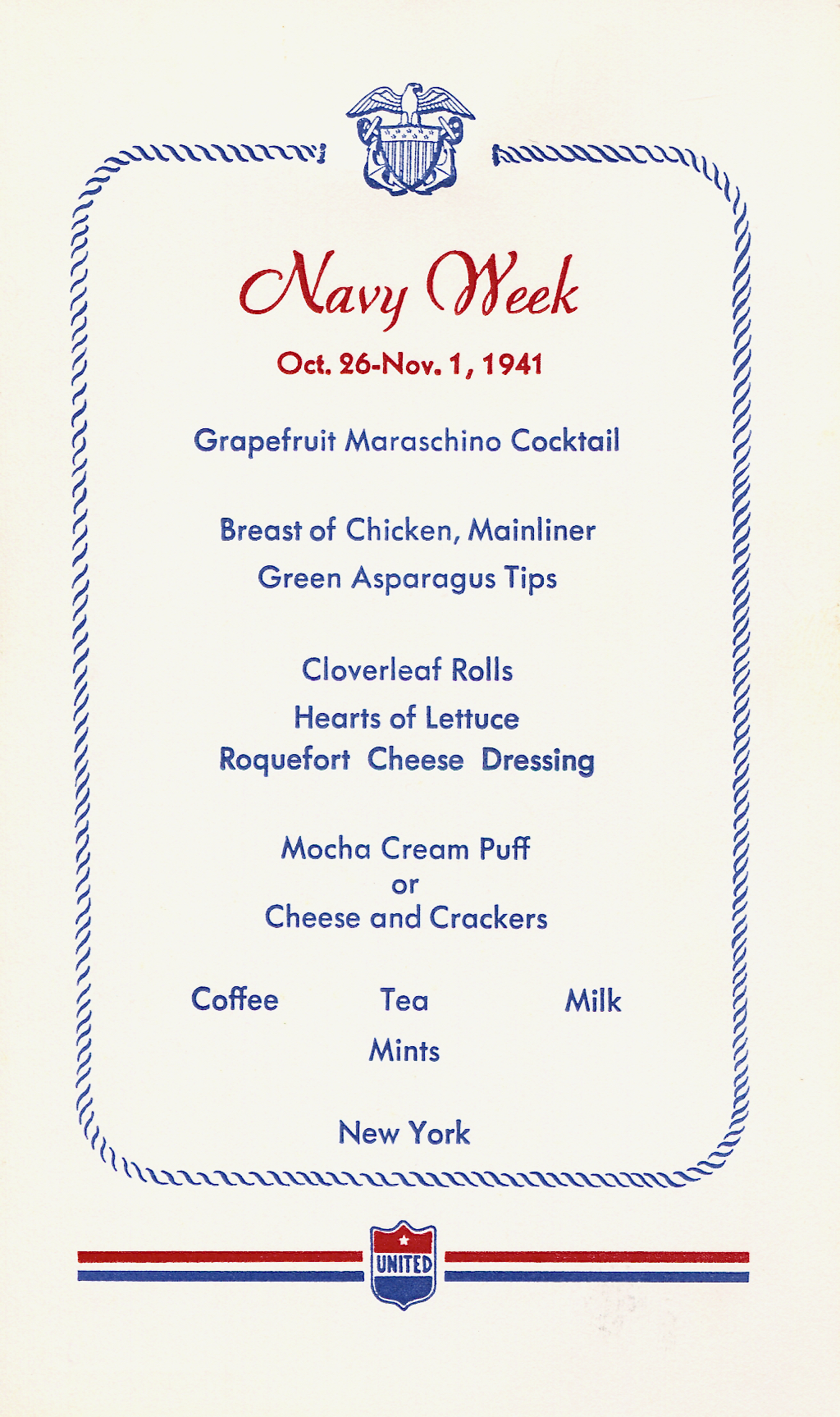 United Air Lines postcard celebrating Navy Week: Oct. 26-Nov. 1, 1941’. It is ironic that this menu postcard was handed out one month before the attack on the U.S. Naval base at Pearl Harbor, Oahu, Hawaii. Note also the border resembling the rope of a ship. 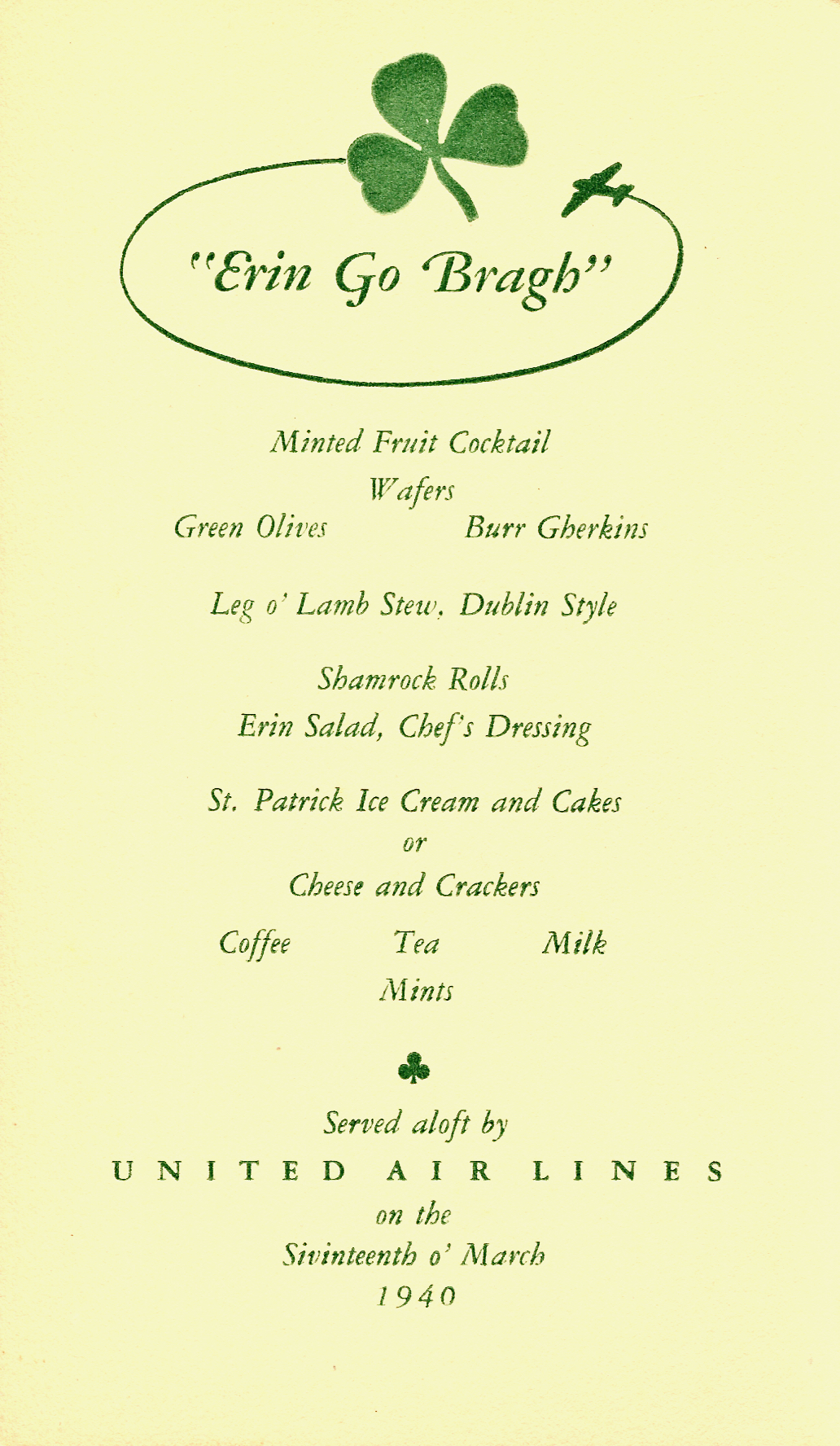 United Air Lines menu postcard issued especially for St. Patrick’s Day, 16 March 1940.  There’s a lot of Irish in the text of this card. 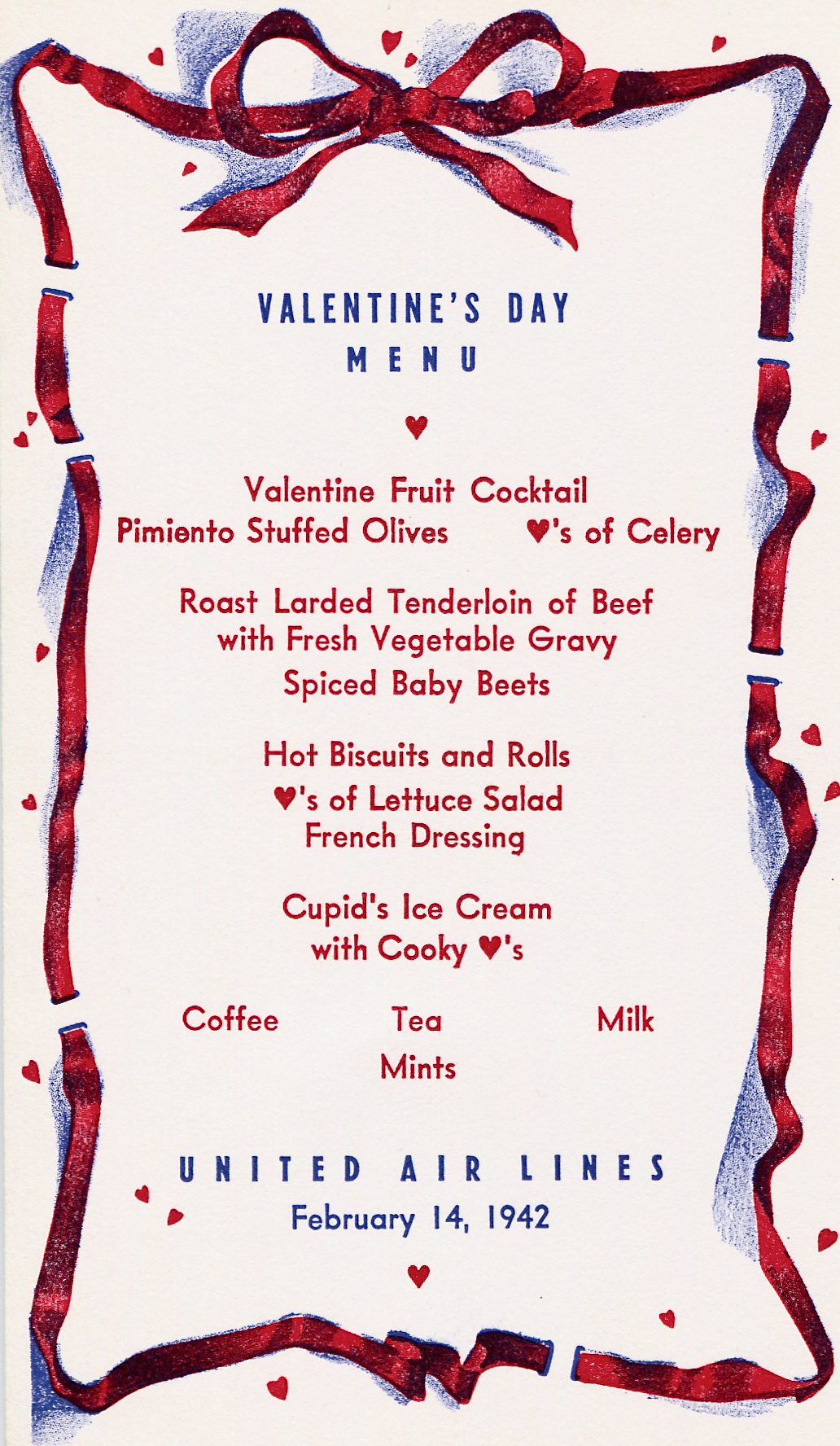 In the 1940s United several menu postcards with the symbol of a chef running to serve a steaming hot meal, such as the following: 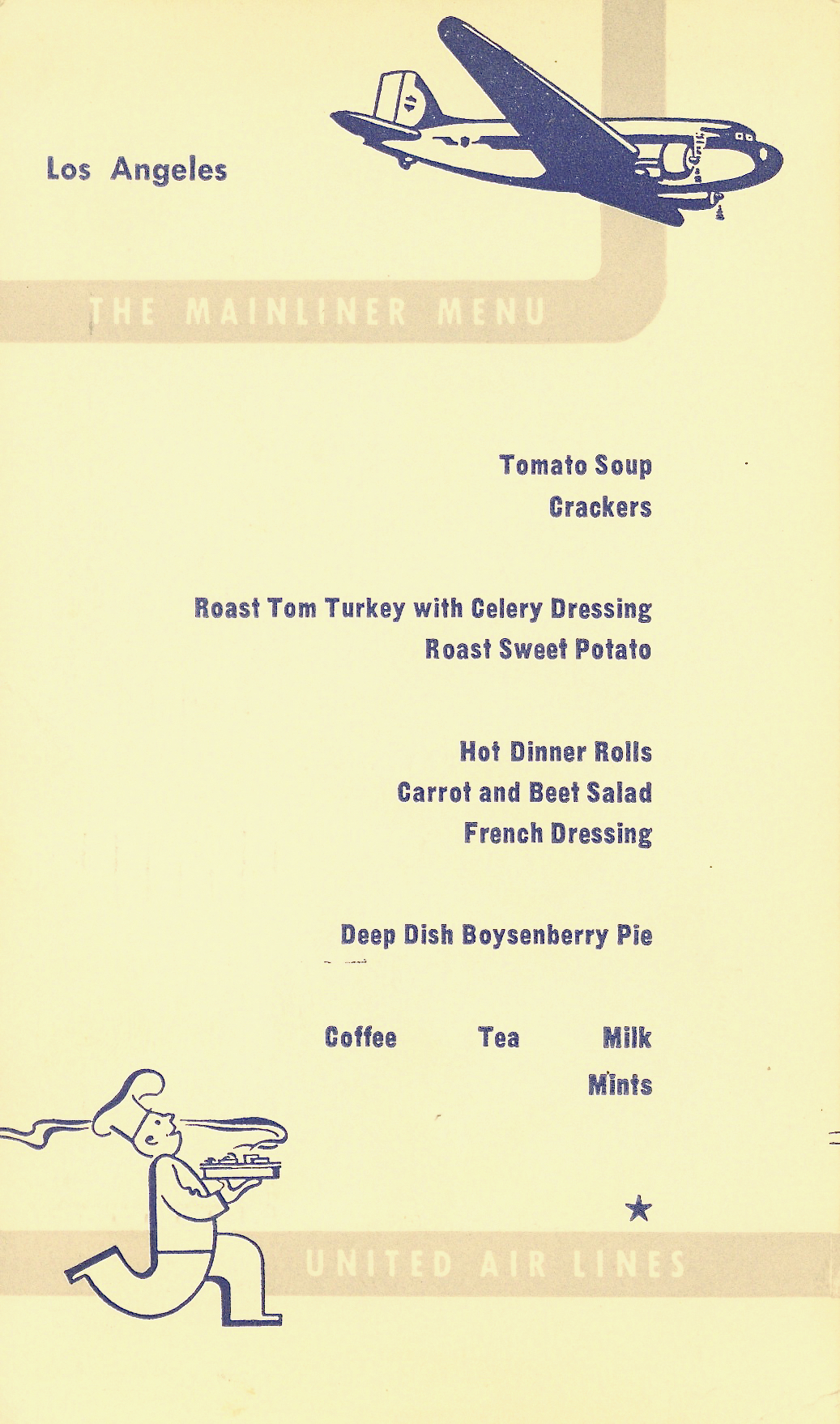 United Air Lines menu postcard showing a DC-3 and noting ‘Los Angeles’, postmarked 20 January 1943.  The message on the back says: “This meal on the other side of card I just finished while in flight between Los Angeles and San Francisco. It was very tasty and I enjoyed it very much. Best to all the office.”  I’m sure this was the kind of publicity that United desired. 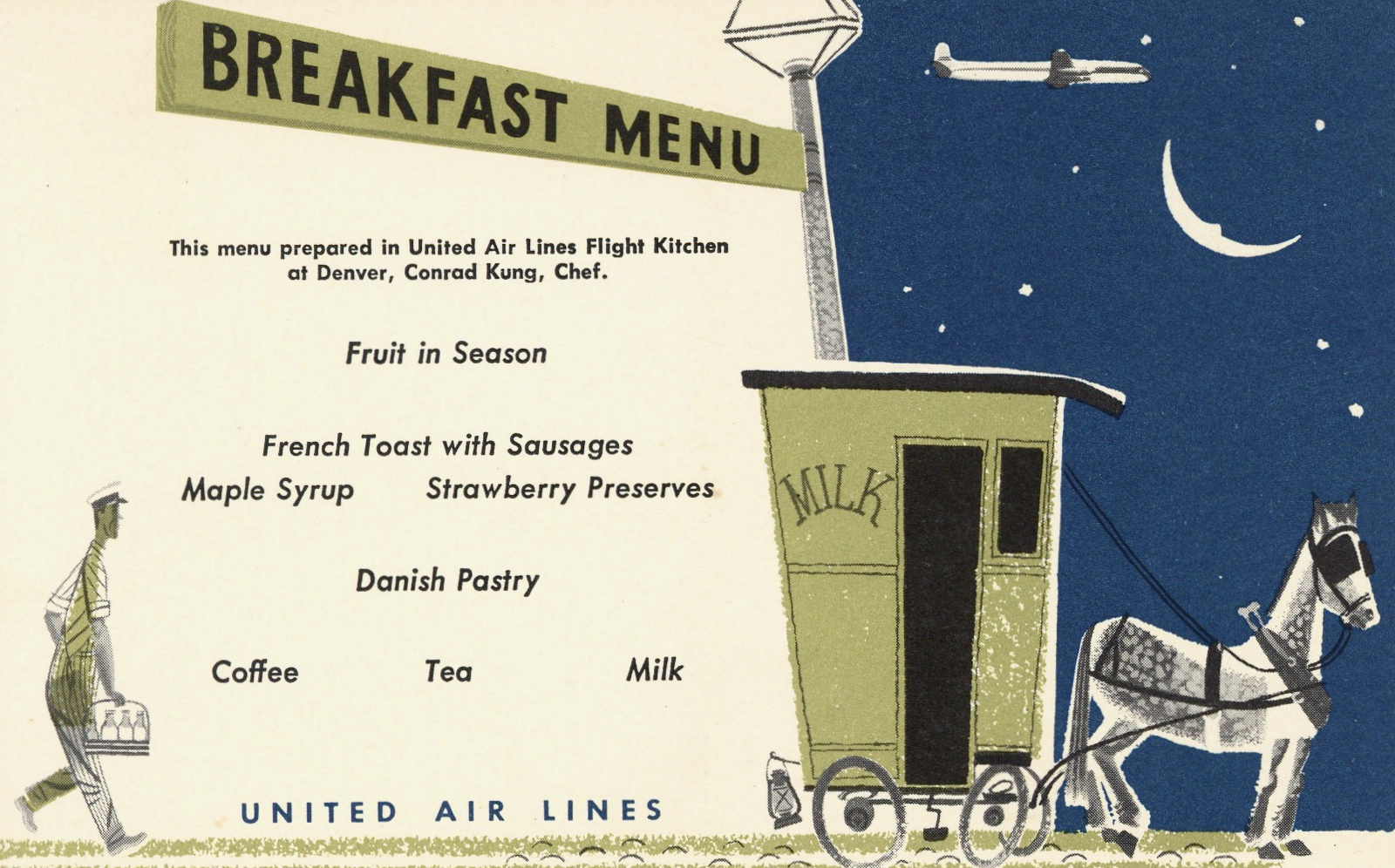 United Air Lines ‘Breakfast menu’ postcard, 1950s.  The image of the very early milk delivery suggests the freshness of the food served.  United also widely publicized its Flight Kitchens and chefs, as can be seen in the text above the menu. 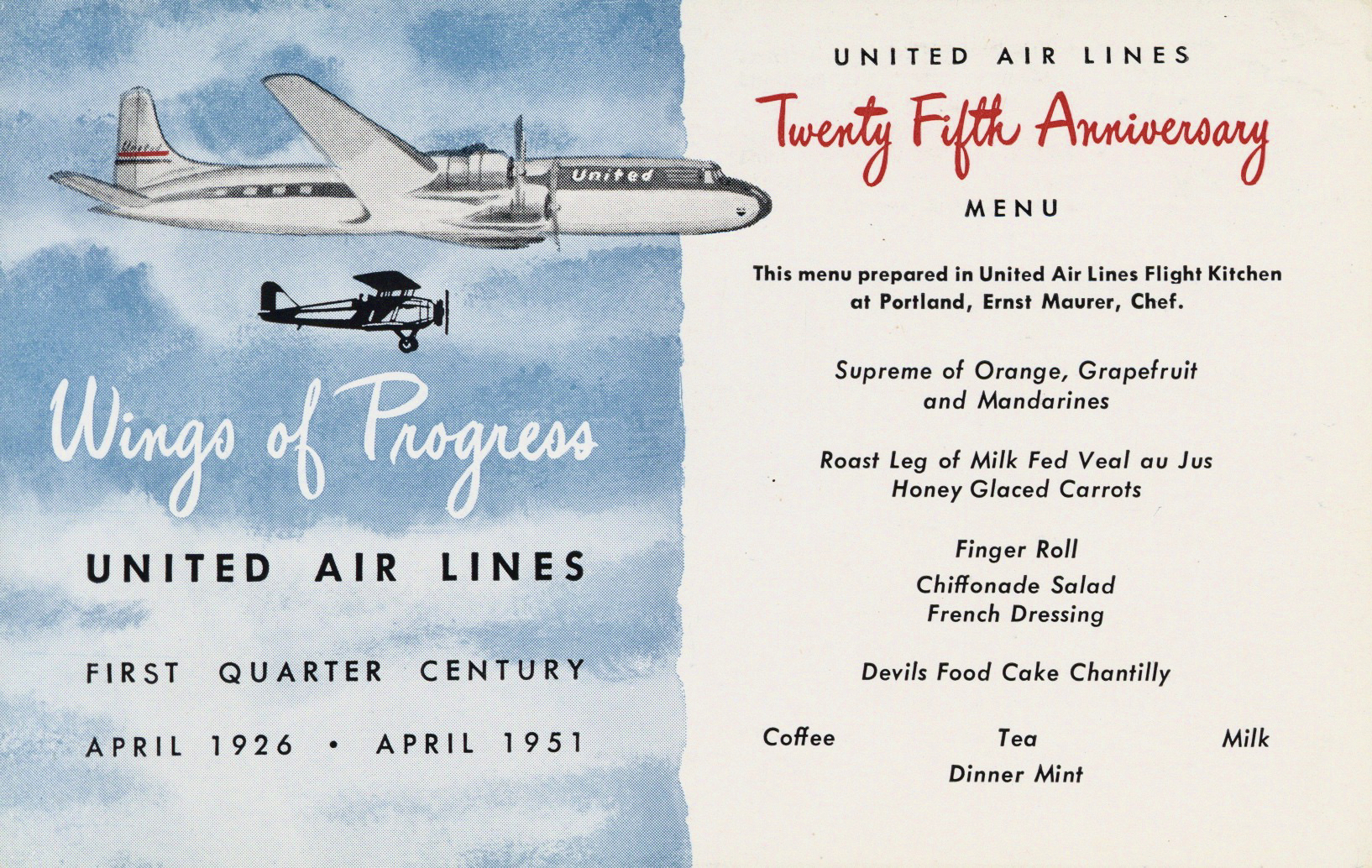 United postcard with menu prepared by United’s Chicago Flight Kitchen, Eugene Ertle, Chef, and destination photo of Santa Catalina Island, California.  Another menu postcard with this view has the logo of the 50th anniversary of powered flight on the postcard side and so must have been issued in 1953.

Let’s now turn to the other U.S. airlines that issued menu postcards. 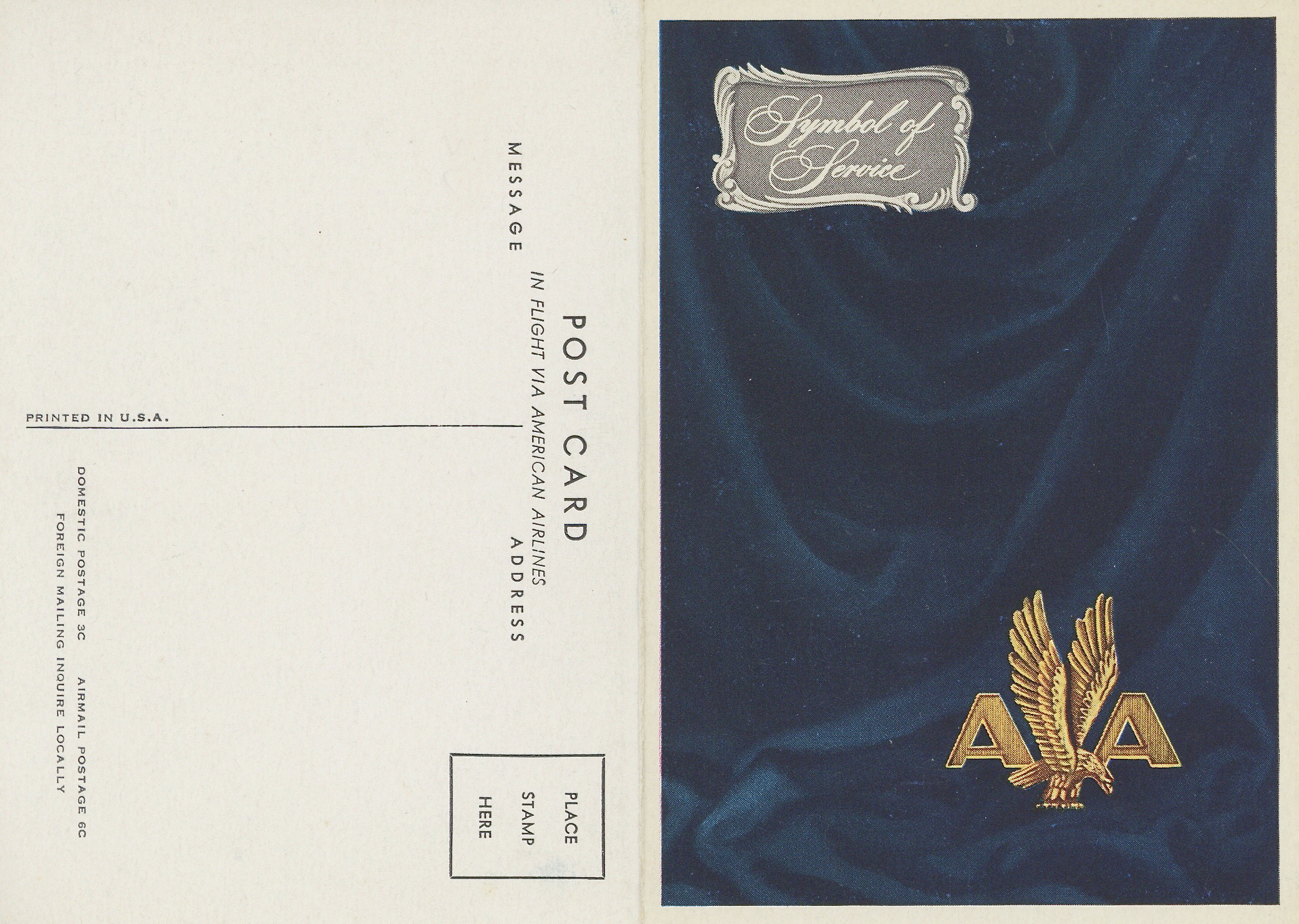 American Airlines foldover menu postcard.  When folded the AA logo appears on the picture side and the postcard side is on the back, while the menu appears inside. This style exists with different menus.  The one shown was served on American’s ‘New York Toltec’ flight.  ‘El Tolteca’ was American’s name for its service to Mexico City in the 1950s.  So this menu is in Spanish as well as English.  One of my cards of this type is postmarked 29 April 1950. 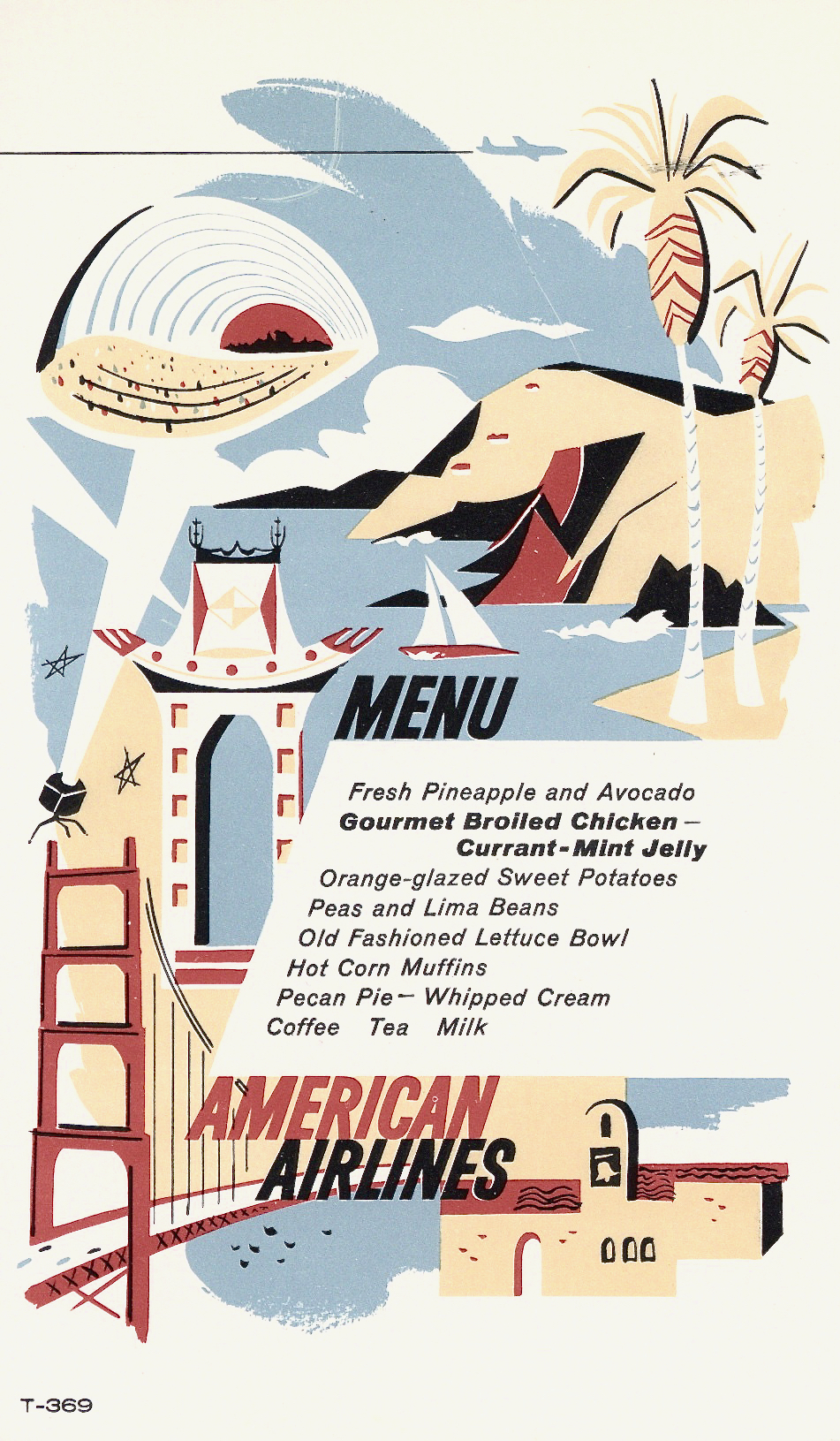 American Airlines menu postcard showing symbols of California as a destination.  The postcard back says ‘First with Jets Across the U.S.A.’.  This is part of a destination set issued in the early 1960s.  The same destination can have different menus.  Other destinations in this set include Mexico, New England and New York, and there may be others. 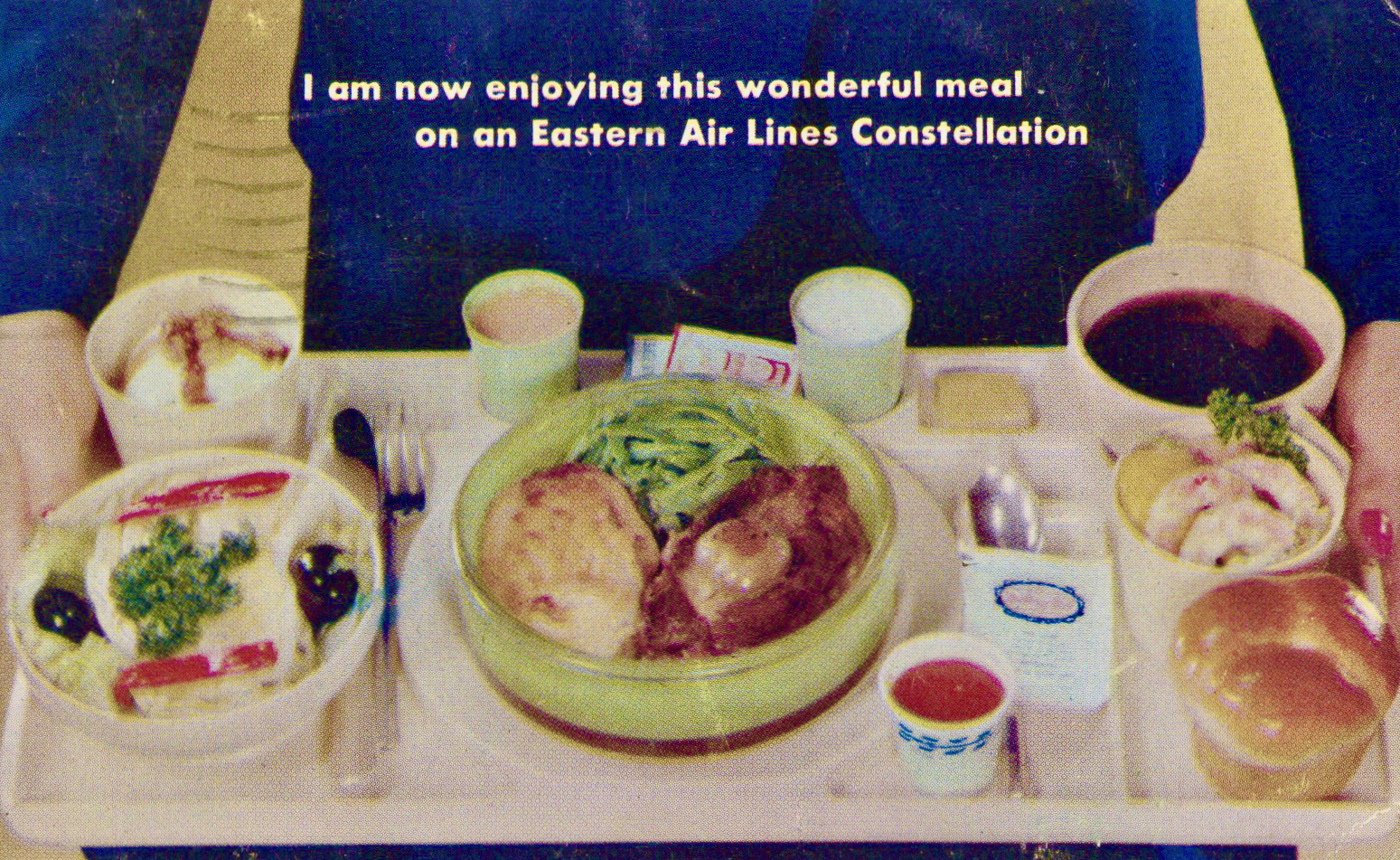 Eastern Air Lines postcard showing actual photo of what’s on the menu aboard a Lockheed Constellation, postmarked 18 July 1955.  Part of a set that shows photos of different meals served on Eastern.  On this postcard a child wrote “Hi Grampa !  Just ate all of it.  Not sick at all !”    Well, I guess that’s a good enough testimonial for airplane food. 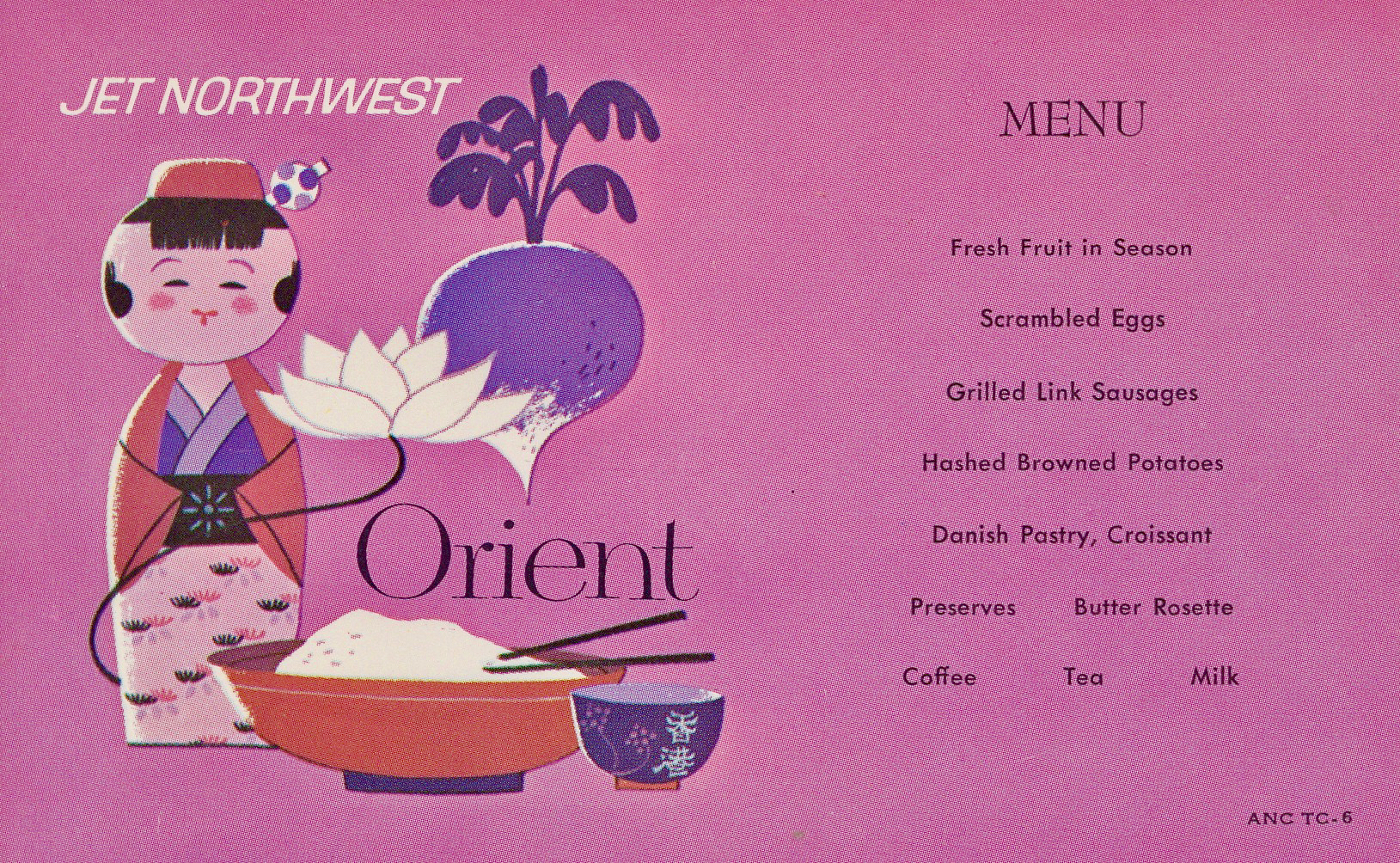 Northwest Orient Airlines menu postcard, ‘Orient’, 1960s.  This is part of a set with beautiful illustrations of symbols and foods of the particular destination.  Other destinations in the set include Alaska, Atlanta, Florida, Pacific Northwest and Philippines, and there are probably more. 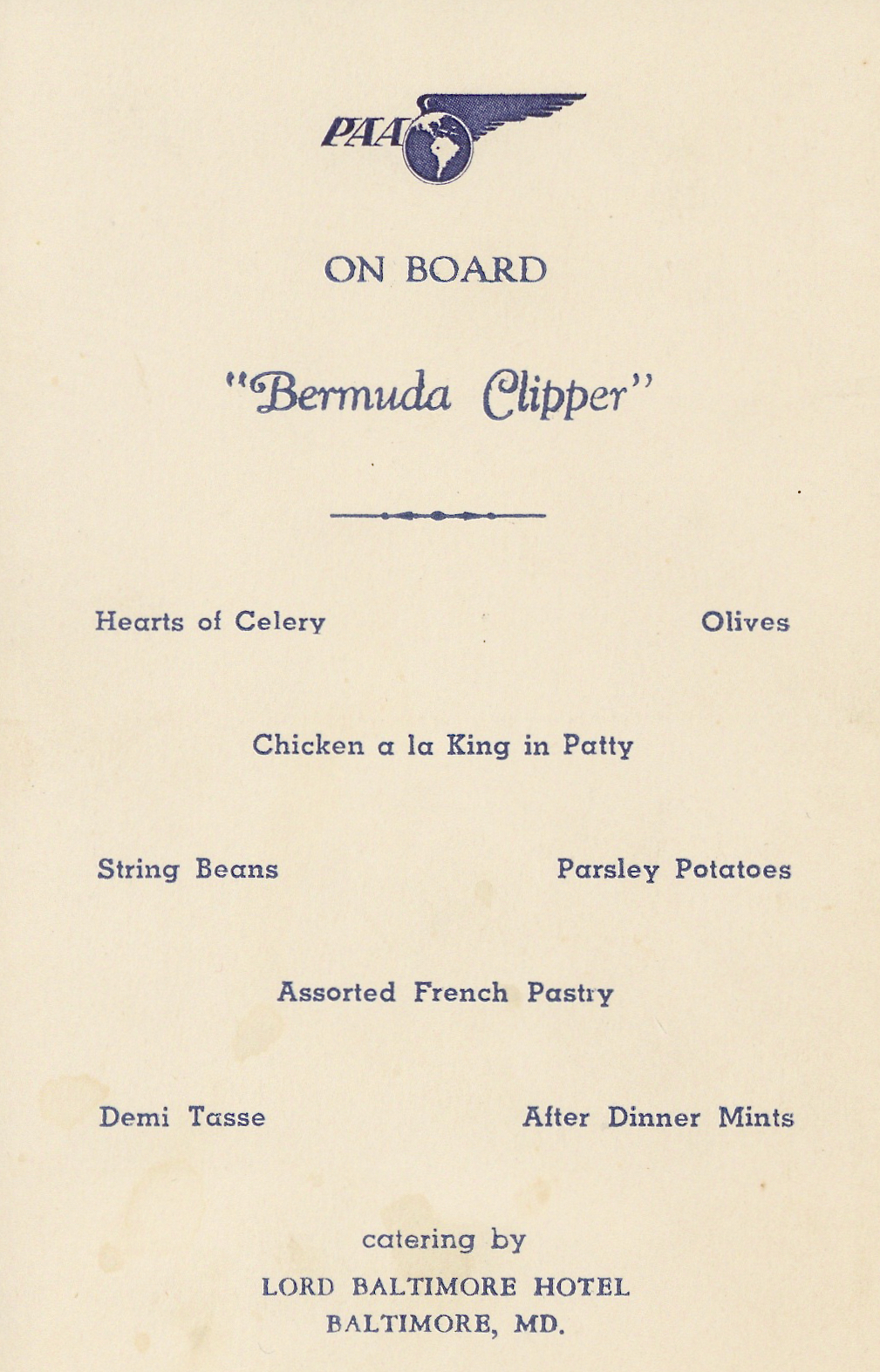 Pan American menu postcard, ‘On Board: Bermuda Clipper’.  This rare card dates from the late 1930s or 1940, and was probably used on Pan Am’s Baltimore – Bermuda seaplane route. 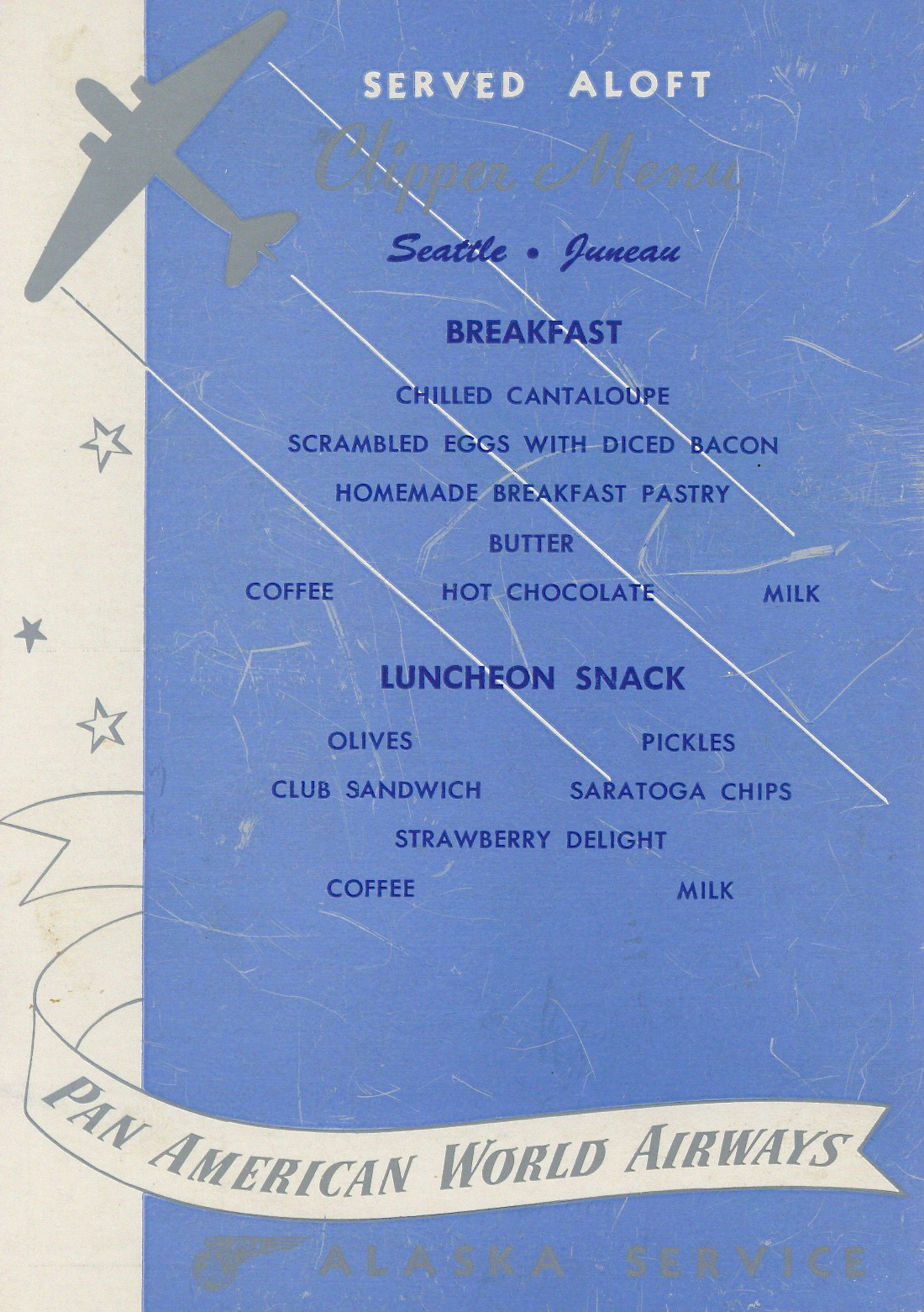 Pan American ‘Alaska Service’ menu postcard, Seattle – Juneau with a destination photo, in the style of the 1950s.    Ex William Demarest collection.  There are other views in this set, and they are much harder to find than the corresponding United menu postcards of the same style. 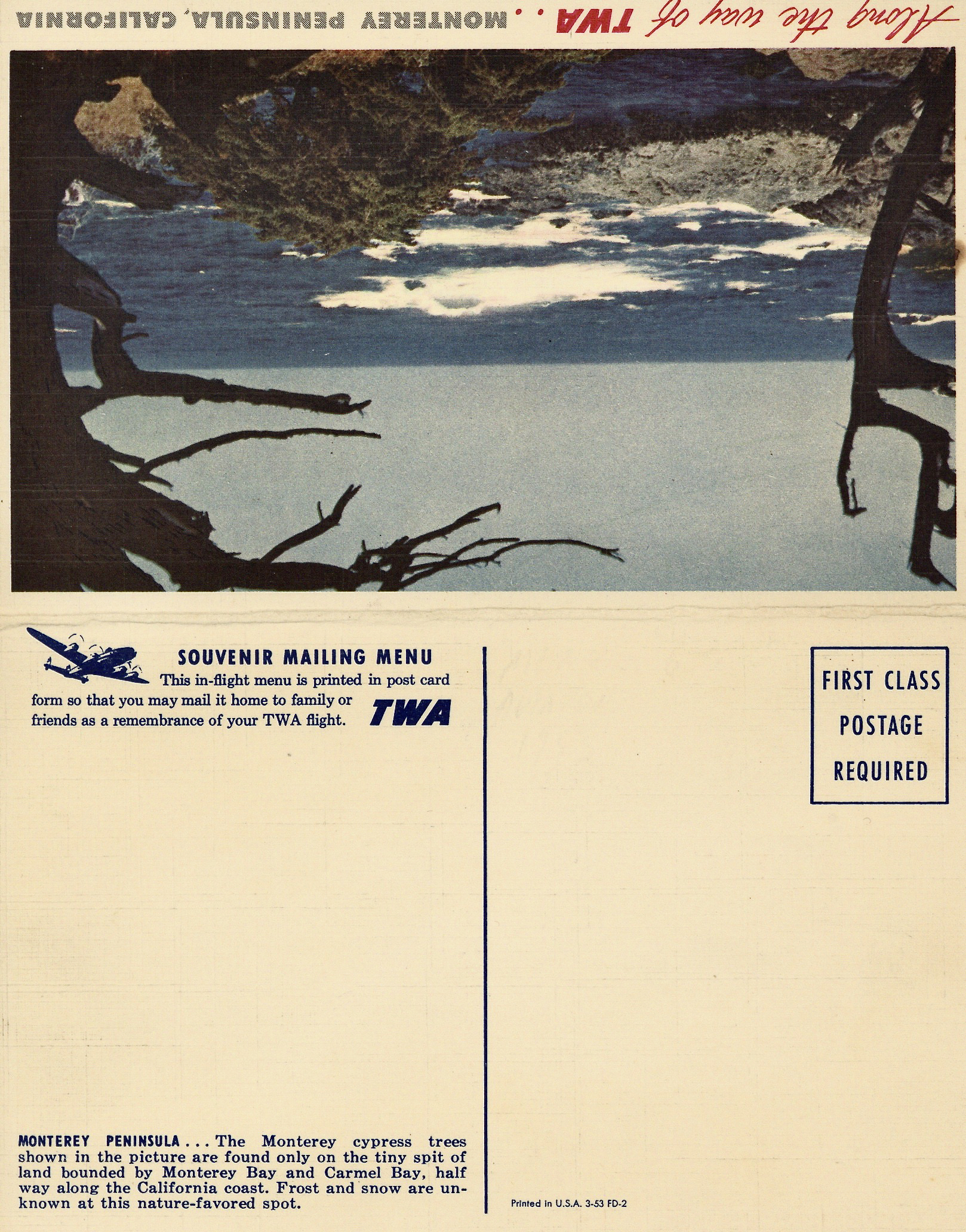 TWA (Trans World Airlines) foldover menu postcard, showing the postcard back and foldover view, here Monterey Peninsula, California.  The menu takes up the entire other side of the postcard and view portions.  Issued March 1953.  The postcard back says: “This in-flight menu is printed in post card form, so that you may mail it home to family or friends as a remembrance of your TWA flight.”  I am aware of similar postcards with views of Naples and New York, and there may be others. 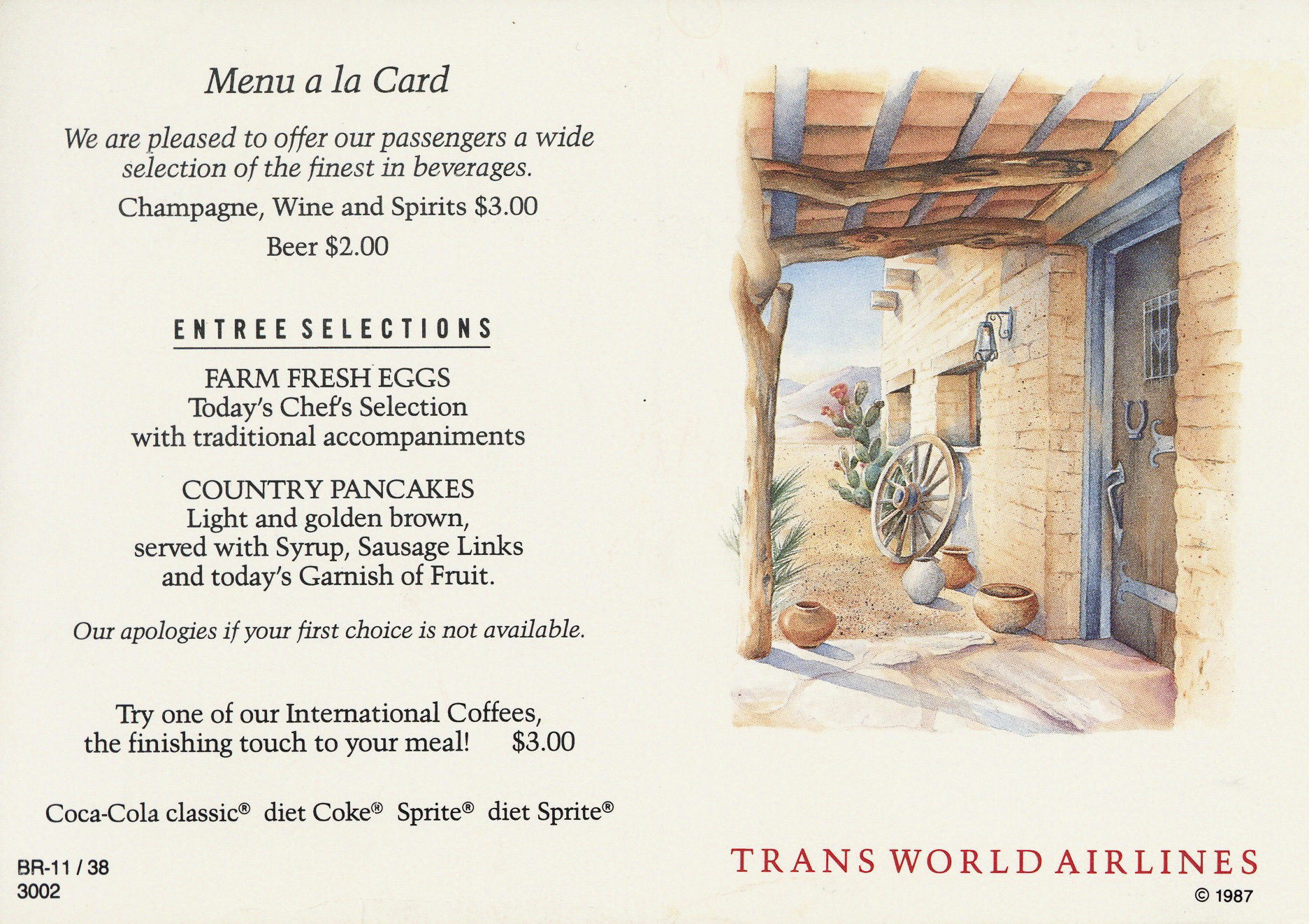 TWA ‘Menu a la Card’ postcard, with artwork typifying ‘Phoenix’.  Card is slightly larger than continental size.  Part of a set of destination menu postcards issued in 1987.  This is the latest date I know of for an airline menu with a postcard back on the menu itself.  The postcard back says: “TWA is pleased to present our new Great Destinations Series.  Through an artist’s vision we wish to share with our passengers the spirit and the aura of some of the Great Destinations that TWA serves.  Rather than depict famous landmarks, we have chosen scenes that we think typify the life style, the feel for a country or city that no monument can convey.”  Other destinations in this series include London, Paris, Puerto Rico, St. Louis and San Francisco, and there probably are others. 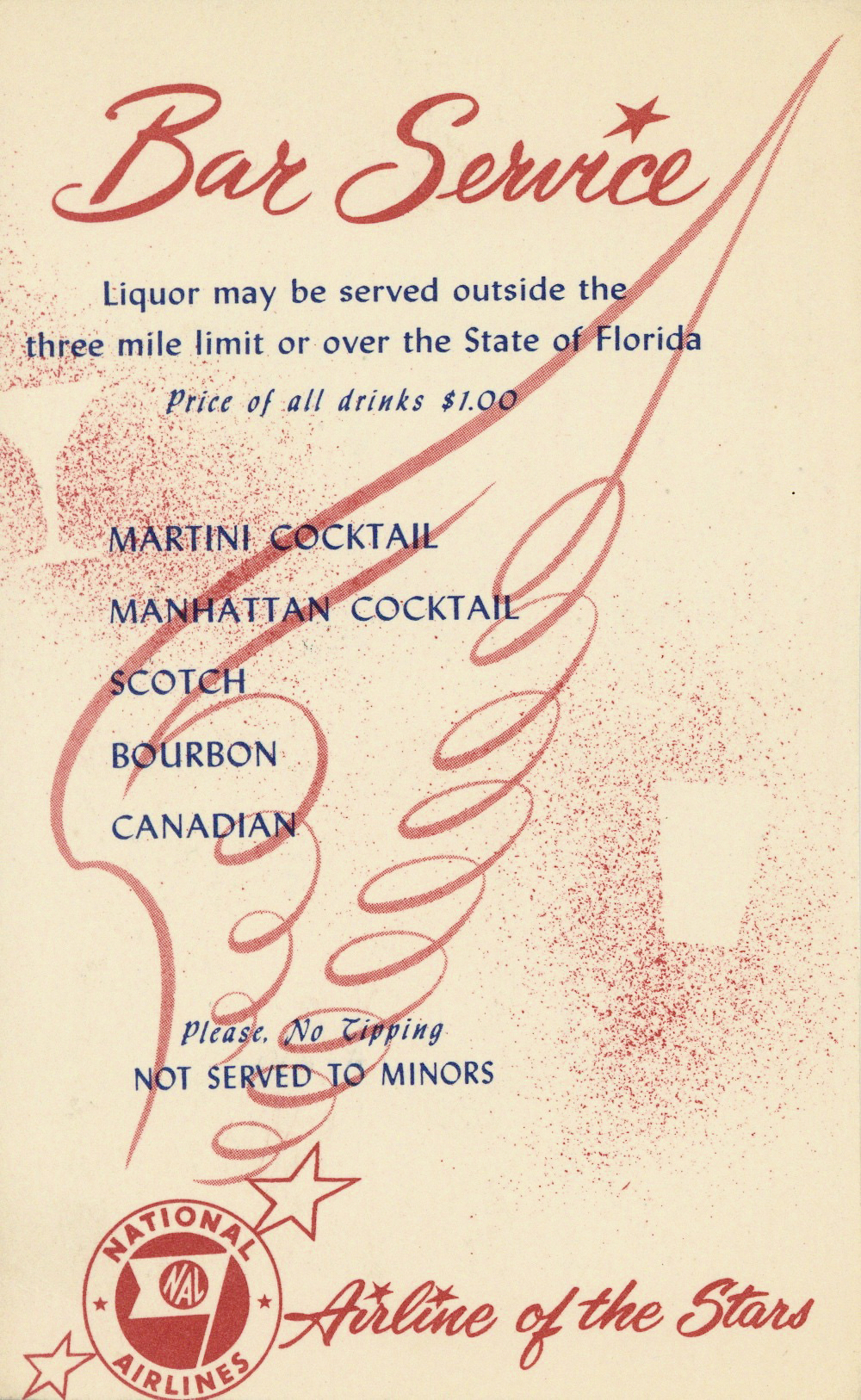 National Airlines ‘Bar Service’ menu service, 1950s.  Note the text ‘Liquor may be served outside the three mile limit or over the State of Florida’.  Before 1949 U.S. airlines generally did not serve alcoholic beverages in flights over the U.S.  Thereafter, for a brief period into the 1950s, various States did not permit the serving of alcoholic beverages in flight.  Apparently, on the flight where this card was handed out, National could serve drinks only when the aircraft was over Florida, or more than three miles offshore, considered to be ‘international waters’. 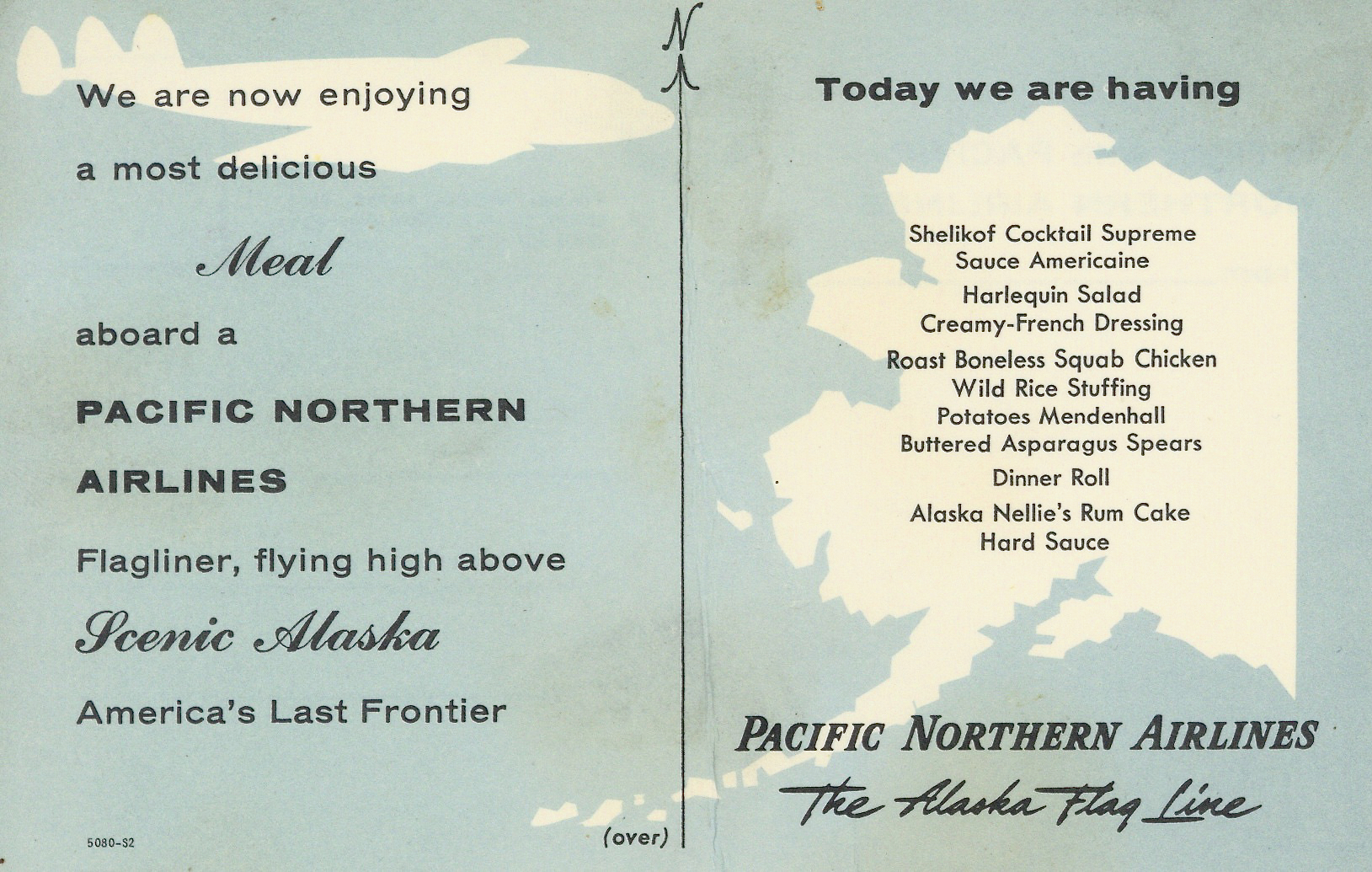 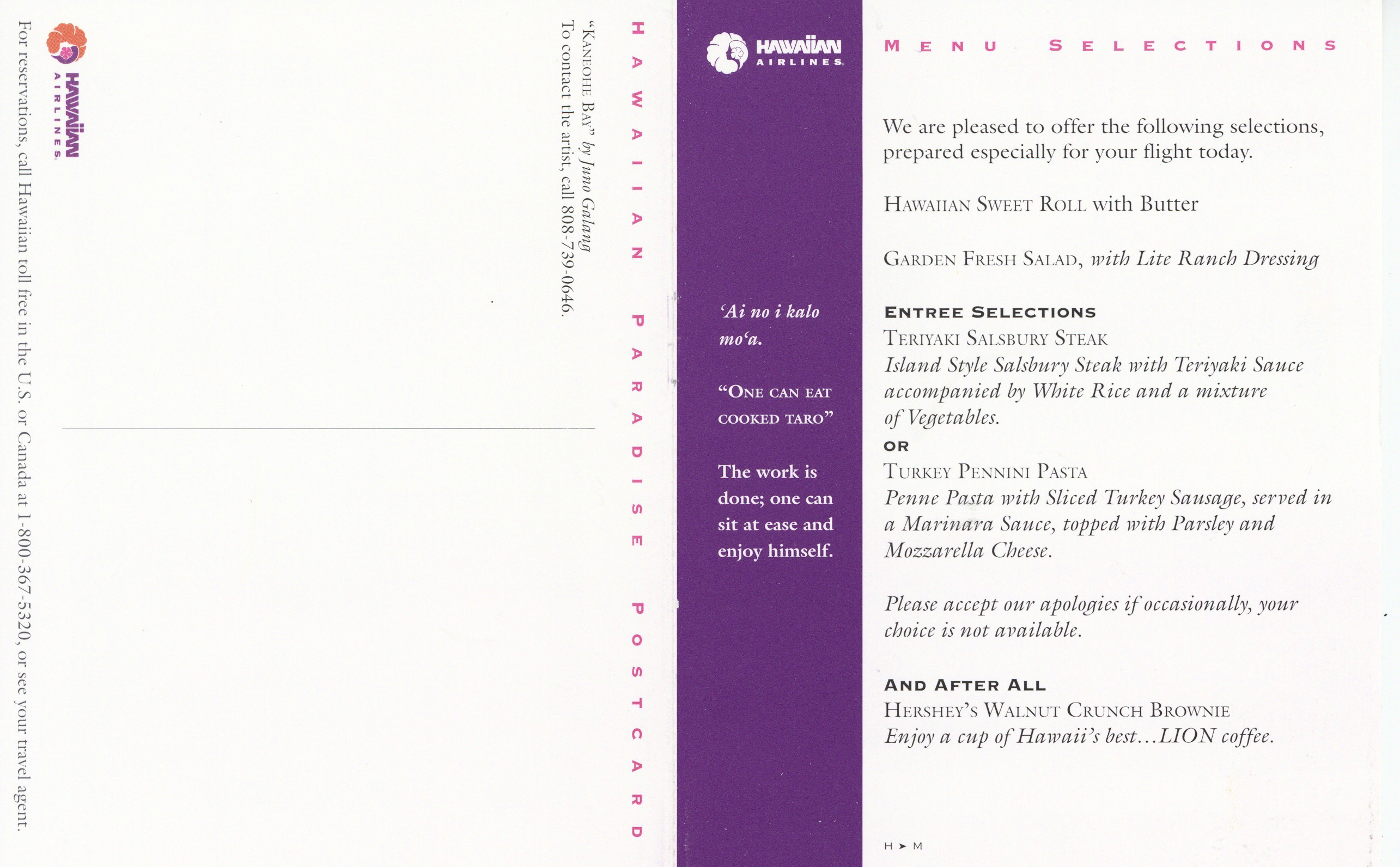 Hawaiian Airlines menu and adjoining postcard that can be easily detached and mailed, issued about 1995.  Ex Kuo-ching (‘Peter’) Fu collection.  The other side of the postcard portion shows artwork of Hawaiian artist Juno Galang, and the reverse of the menu portion advertises Lion Hawaiian coffee, served on Hawaiian Airlines flights.

Not illustrated here, but in my collection, are menu cards with detachable postcards issued by three other airlines: Finnair (with attached DC-10 postcard), KLM Amsterdam-Los Angeles service menu postcard (with attached 737-300 postcard), and Virgin Atlantic (one with attached artist’s depiction of people in London looking up to sky, and another depicting a London double-decker bus).

Now let’s turn to menus with postcard backs issued by airlines outside the U.S. 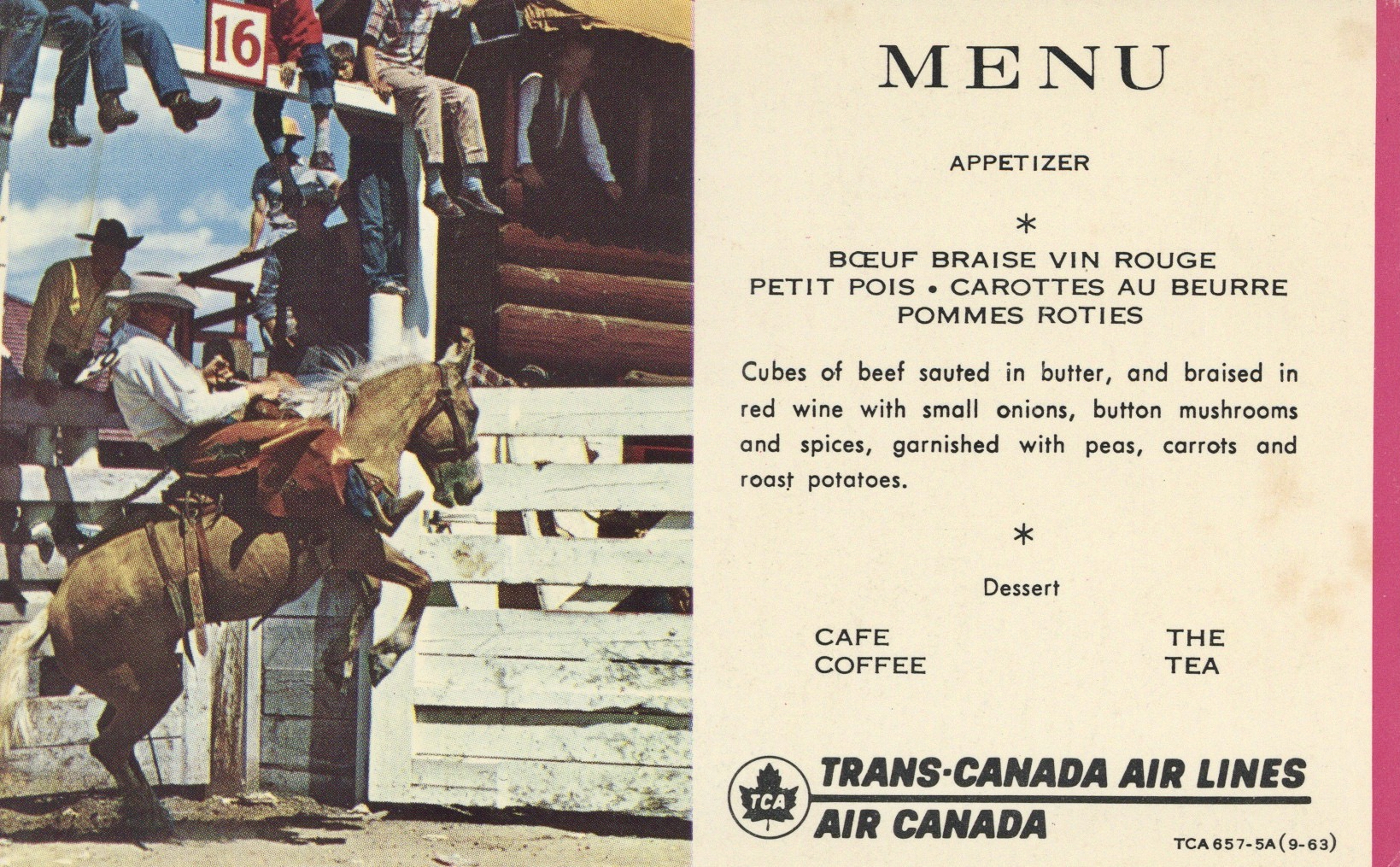 Trans-Canada Air Lines – Air Canada postcard with French and English text and rodeo photo, issued September 1963.  Part of a set with other menus and views. 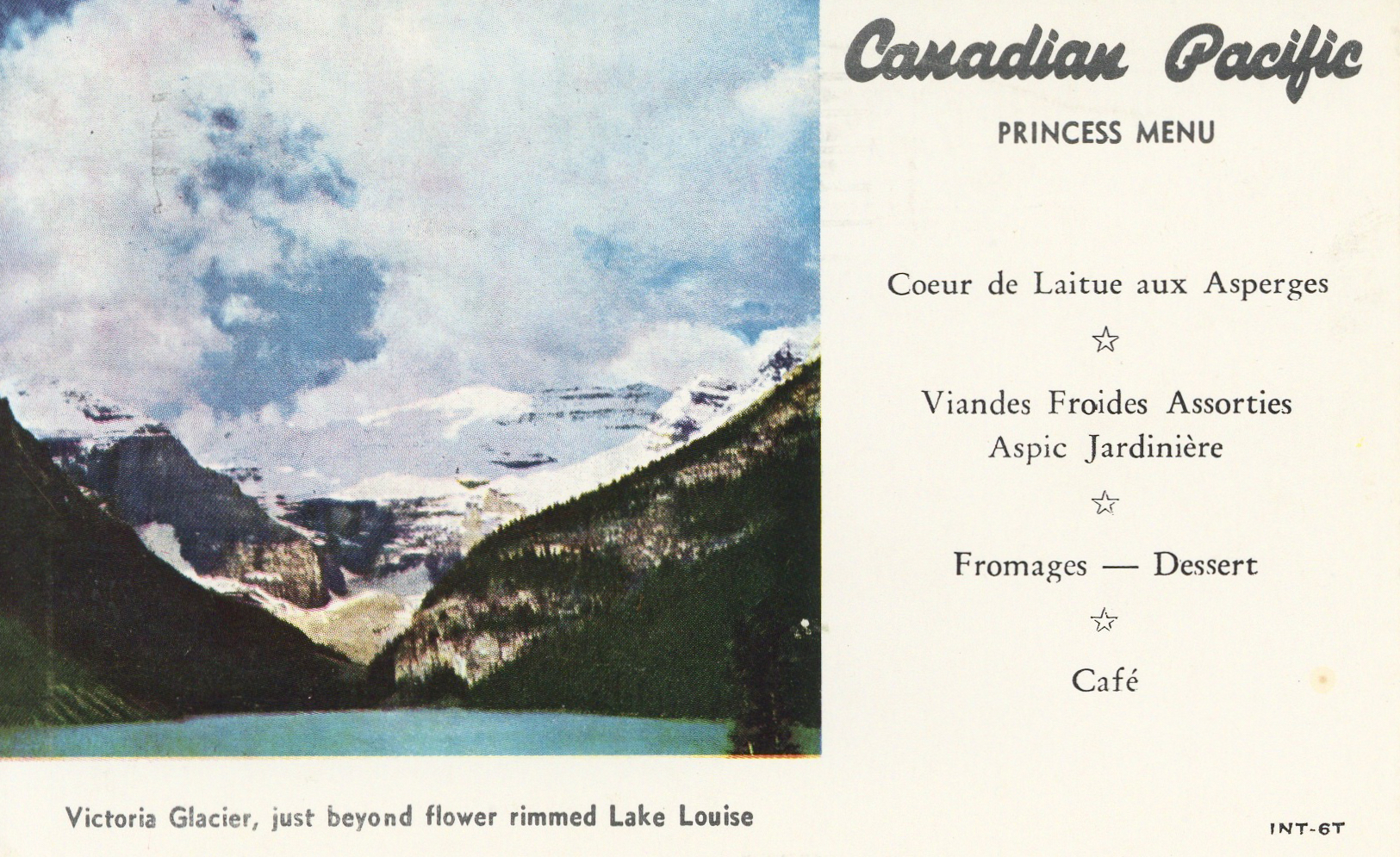 Canadian Pacific ‘Princess Menu’ postcard with photo of Victoria Glacier and Lake Louise, Canada. Card postmarked 27 October 1962. Part of a set with other menus and views. Canadian Pacific also issued menu postcards with the menu surrounded by the insignia of the various Canadian provinces.

I am not aware of any South American, European or Middle East airline menu cards with a postcard back other than those issued by B.O.A.C. (British Overseas Aircraft Corporation) 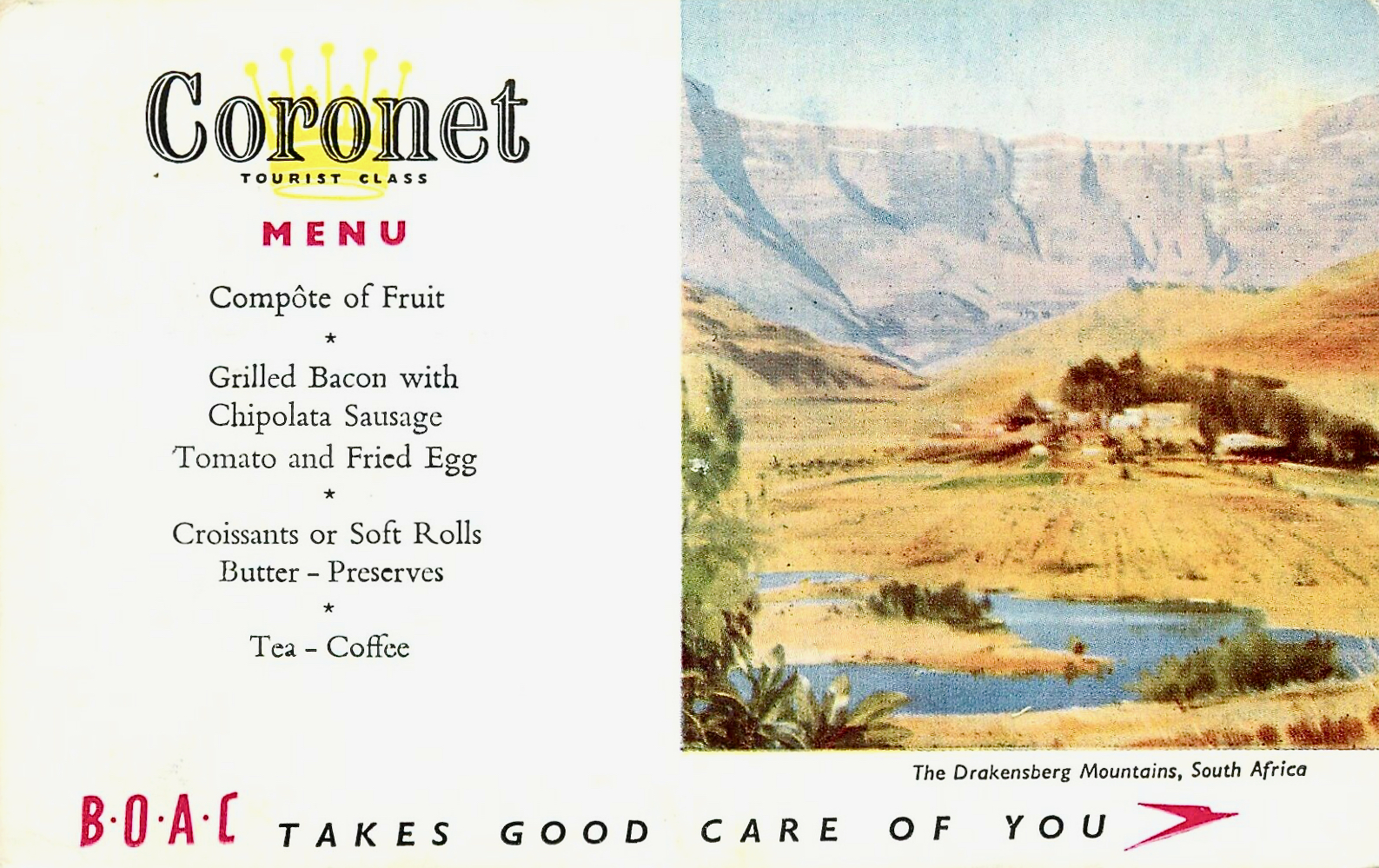 B.O.A.C. (British Overseas Aircraft Corporation) menu postcard, with artist’s view of the Drakensberg mountains, South Africa. 1950s. Internet image. Part of a set with other menus and views. Note the ‘Speedbird’ logo in the lower right. B.O.A.C. also issued, probably in the 1960s, another set of menu postcards with destination illustrations and the tagline ‘all over the world B.O.A.C. takes good care of you’ and with no Speedbird logo.

There are two African airlines that apparently have issued menu postcards, as to which I have never seen an actual card.  They are illustrated on the Famgus Aviation Postcards website, as follows: 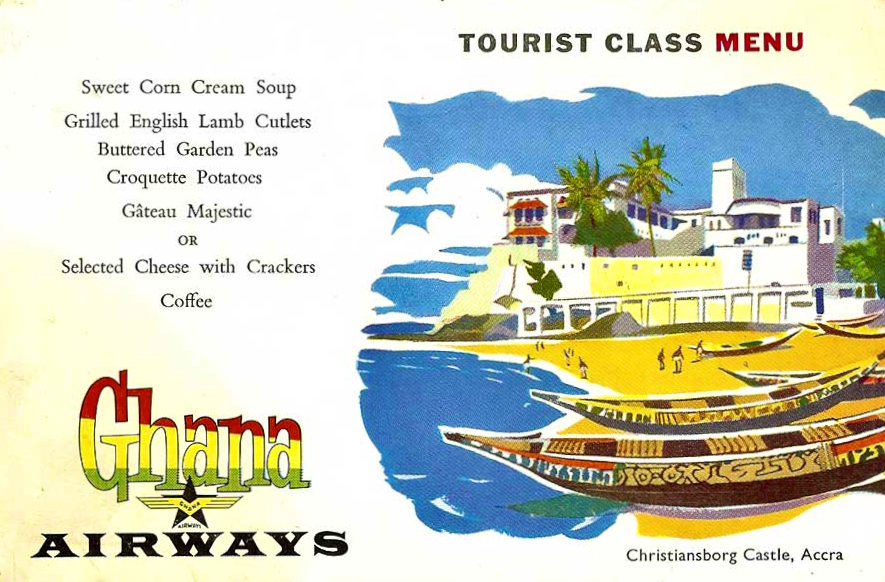 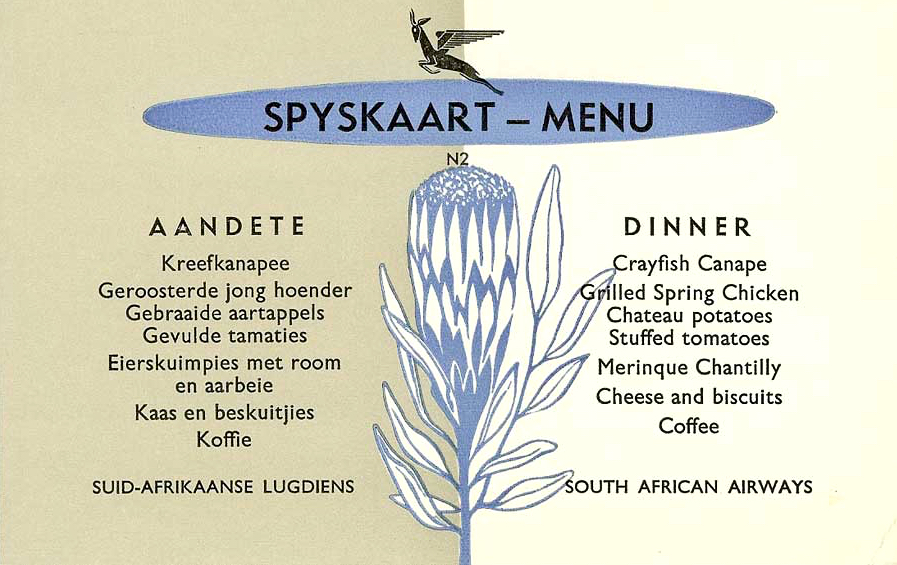 From Asia and Australasia, I am aware of three airlines that have issued menu postcards. 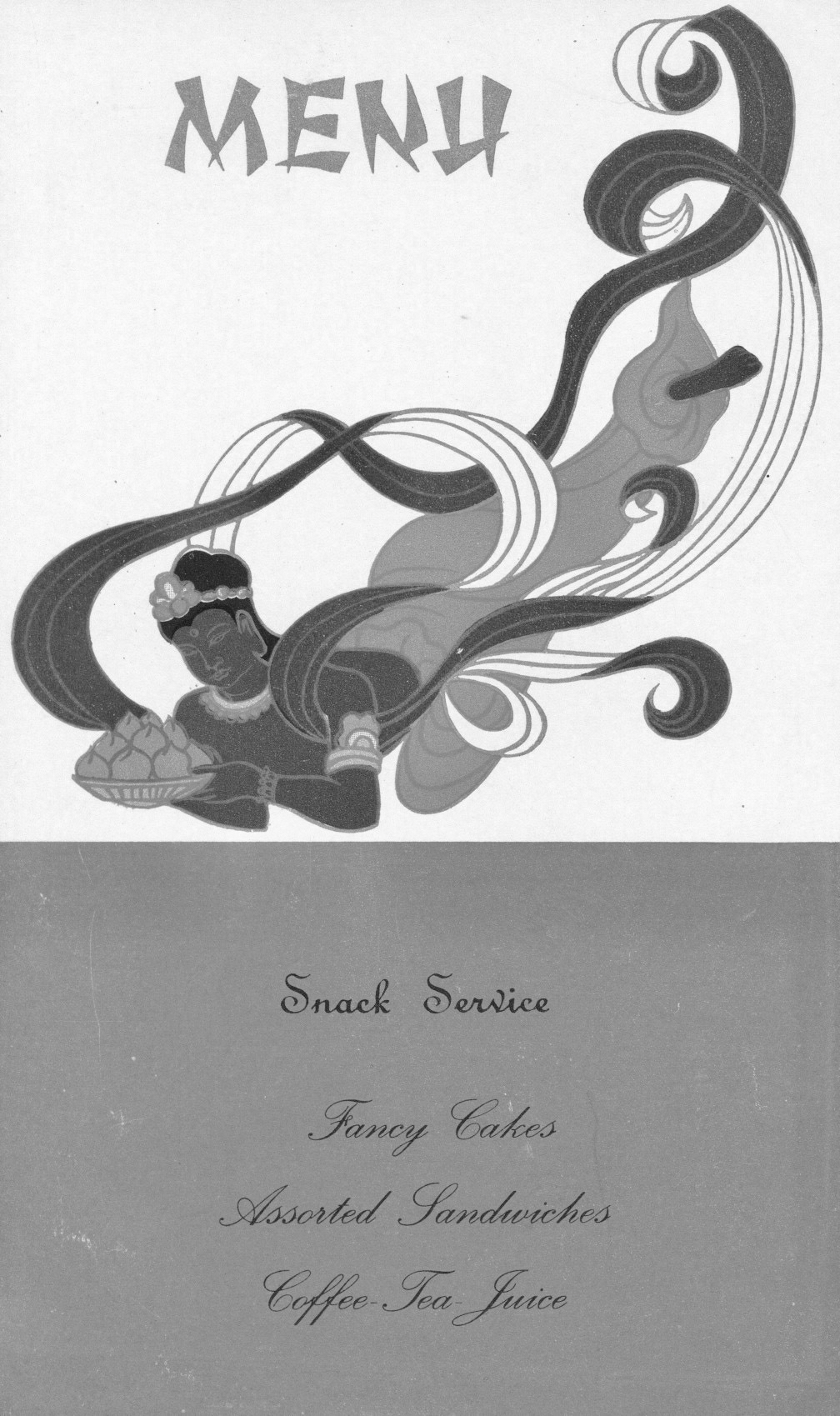 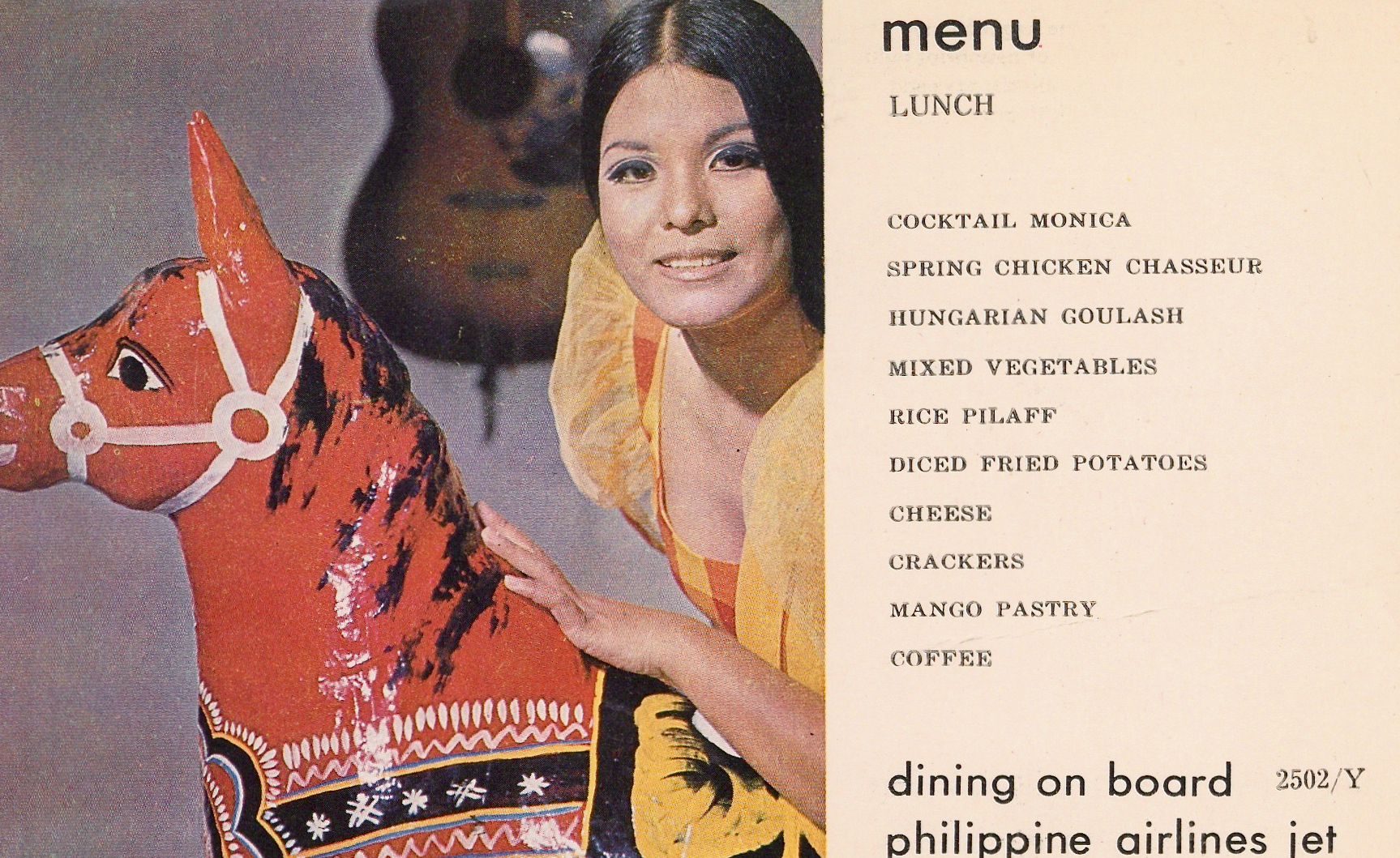 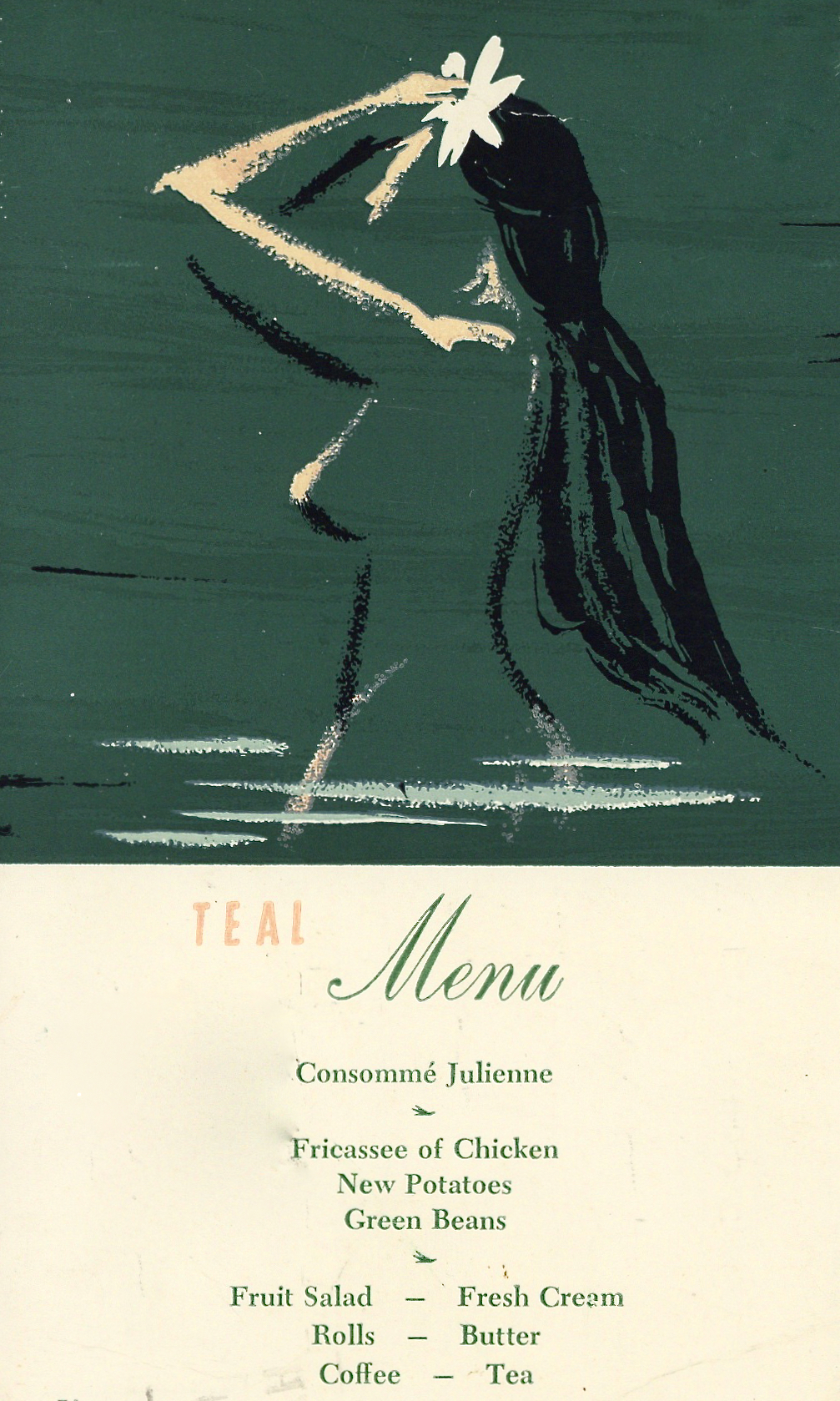 I hope you enjoyed this overview of airline menu postcards.  If you know of any other airlines that issued menu cards with postcard backs, or if you have any comments on my article, I would be pleased to hear from you.  Just email me, Marvin Goldman, at worldairsociety@aol.com.

Until next time, Happy Collecting.
Marvin