From the early days of aviation to the present, many airline postcards have featured artistic expression in promoting destinations and highlighting their aircraft.  This article covers a selection of aircraft art postcards from a variety of airlines and artists.

Postcard showing a mural by aviation artist Mike Machat, dedicated in 2012, at the Museum of Flying, Santa Monica, California. The mural is 20 feet wide (6.1m) and depicts Douglas Aircraft types from the DC-1 to the DC-10. Oversize postcard, issued by the Museum of Flying.

Mike Machat is one of the world’s leading aviation artists and was the first president of The American Society of Aviation Artists.  He is well known to participants in the World Airline Historical Society and related Airliners International shows.  Mike was the keynote speaker at the Airliners International 2014 LAX banquet, and hosted an airline art exhibition at the AI 1992 show.  He has illustrated numerous airline books, including several written by Ron Davies, and authored ‘The Art of Mike Machat: Painting Aviation’s Legends’ (Specialty Press, 2016).  His airline art also appears on several other postcards, including the following:

Let’s turn now to a selection of aircraft types on postcard art, progressing from older to newer aircraft and featuring different airlines and artists. 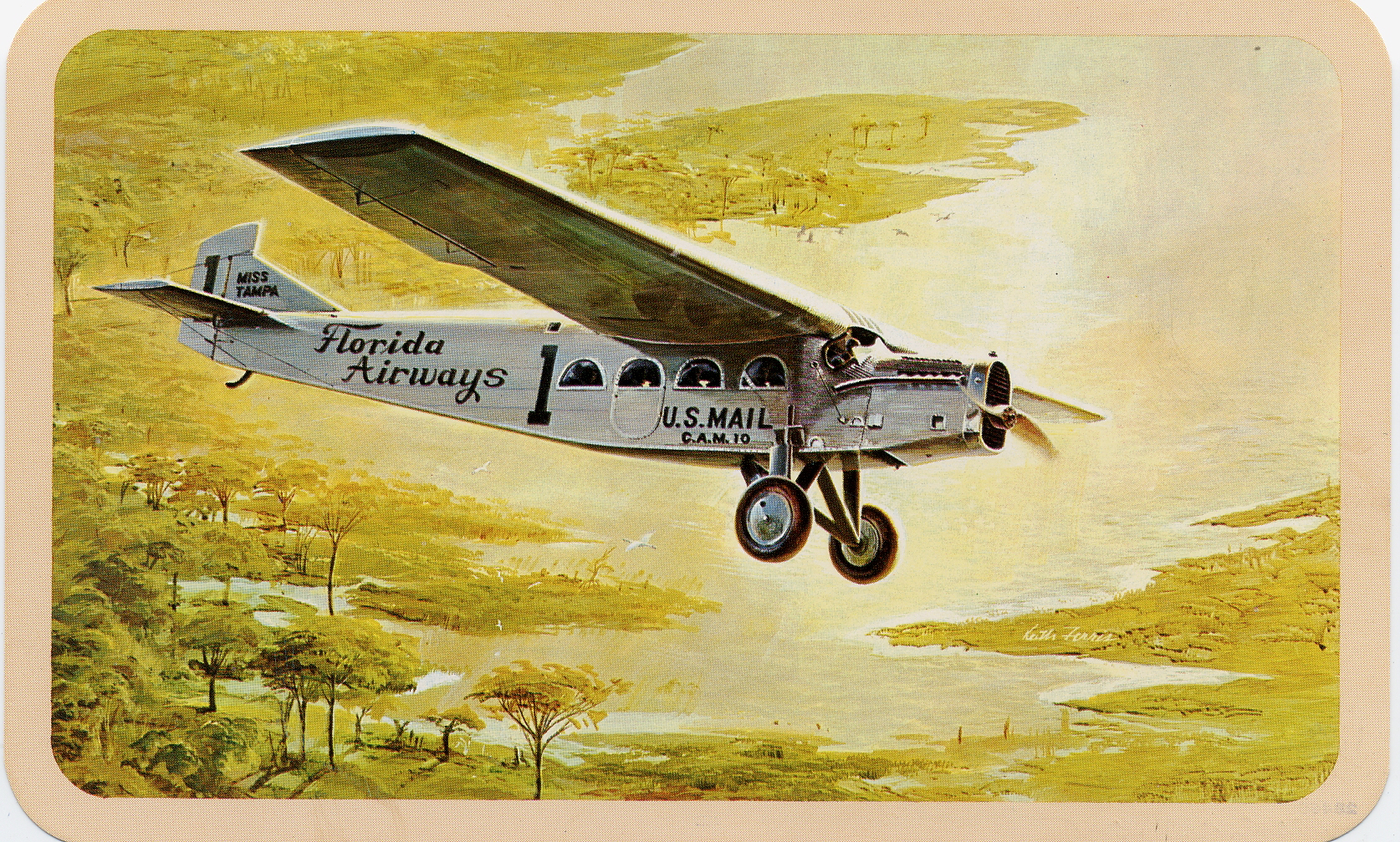 Florida Airways (a predecessor of Eastern Air Lines) Stout 2-AT Pullman, ‘Miss Tampa’, flying over the coastline between Fort Myers and Tampa, Florida.  #28465.  Artist: Keith Ferris, U.S.  Keith Ferris is a founding member of The American Society of Aviation Artists. 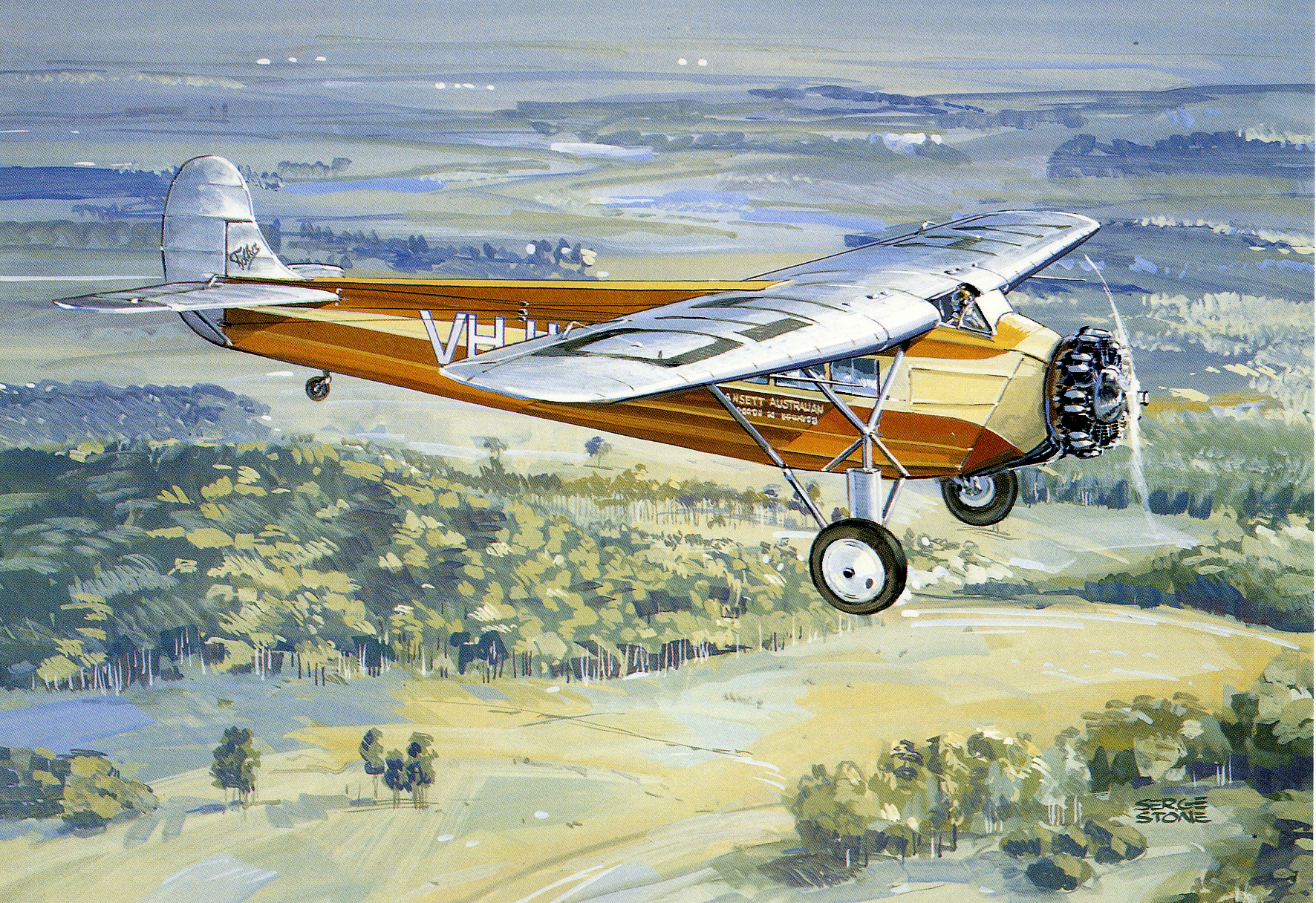 Ansett Australia Fokker Universal VH-UTO.  Issued by Fokker, card B006.  Part of a commission by Fokker to document the complete range of their production.  Artist: Serge Stone of The Netherlands. 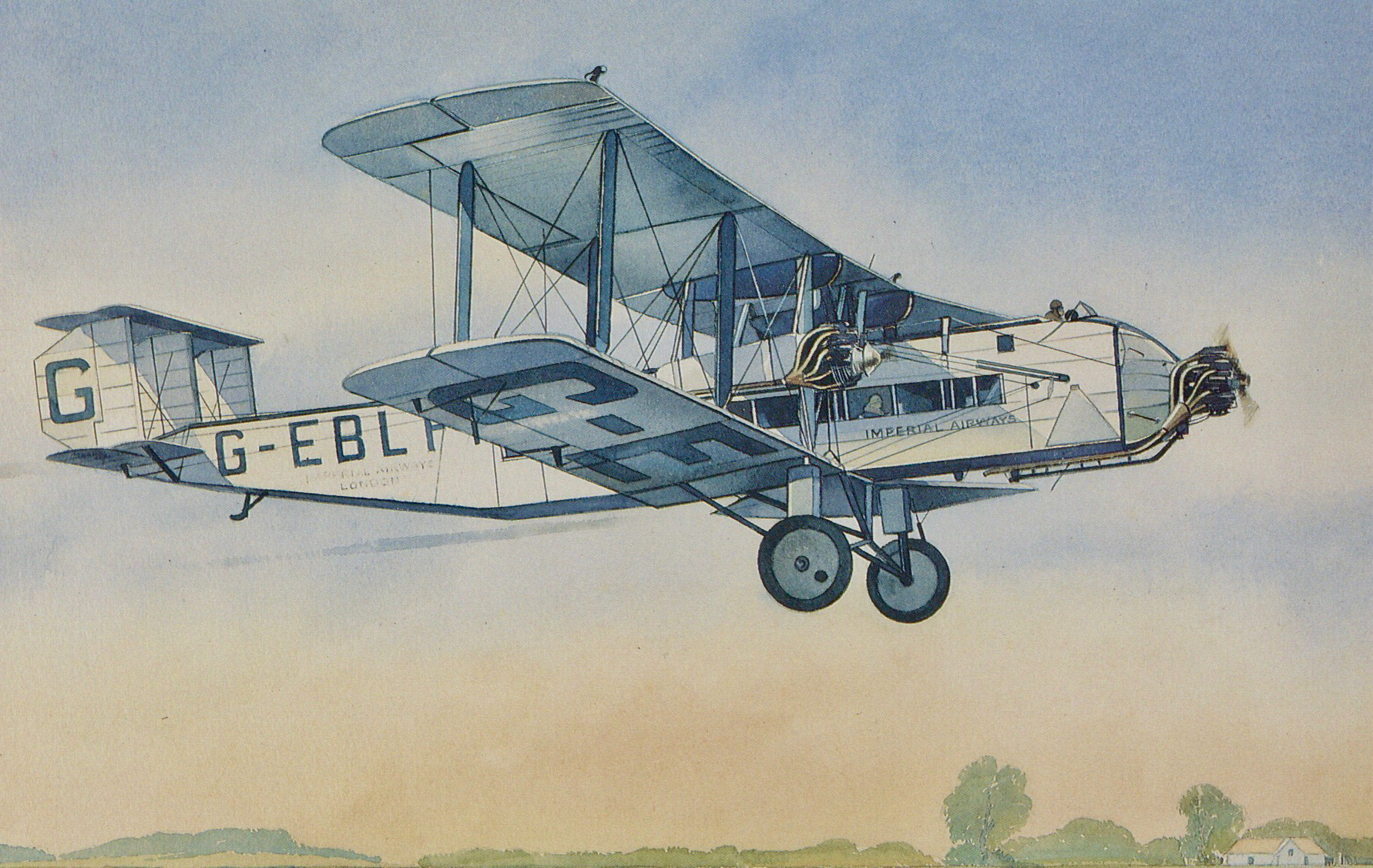 LOT Polish Airlines Lockheed L-14H Super Electra SP-AYB.  Airline issue.  Part of a series of art postcards depicting different LOT aircraft.  Artist: Janusz Grabianski, Poland.  Grabiaski was also a noted illustrator of children’s books, and many of his illustrations for LOT postcards include children and pets in the scene.

KLM Lockheed L749 Constellation, PH-TER, over Java, Indonesia.  Skyliner postcard no. 10.  Artist Thijs Postma, The Netherlands.  Thijs Postma is one of the most noted aviation artists and has illustrated several aircraft postcards of KLM and Martinair.  He participated in the aviation art exhibition at Airliners International 1992, Orange County, California. 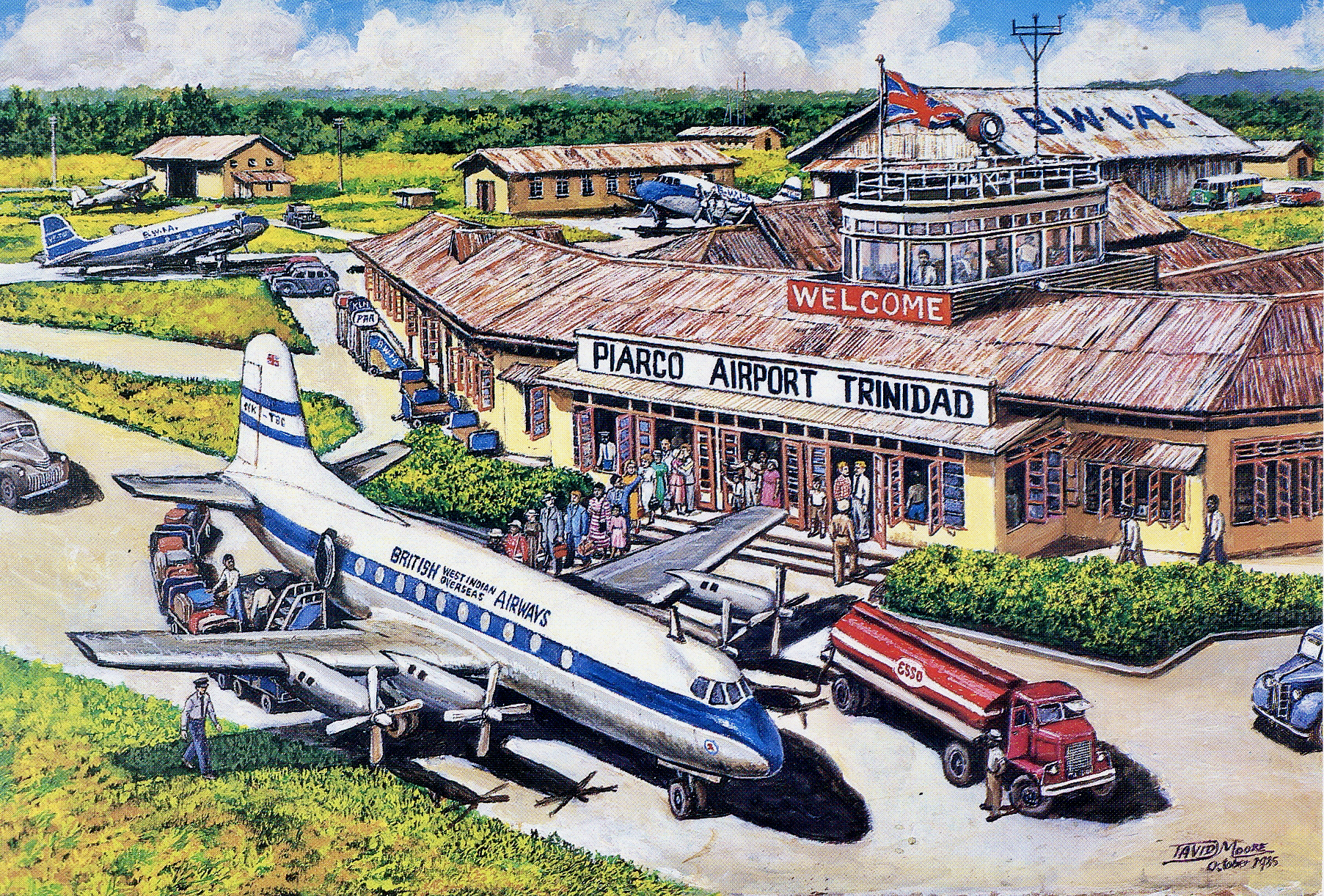 Aeroflot Tupolev TU-114, CCCP-75712. Airline issue. Aeroflot has issued several postcard sets of its aircraft depicted in art form, but the artists are not identified.

United Airlines Douglas DC-8.  International Airlines Museum Historical Post Card #3.  Artist: Tom Kalina, U.S.  Tom Kalina has provided airliner art for several of the Captain’s Log issues of the World Airline Historical Society and has also been active at Airliners International shows.  He is a member of The American Society of Aviation Artists.

Speaking of computer graphic art, note that the most recent publicity postcards issued for the annual Airliners International shows have been designed by U.S. aviation artist Chris Bidlack.  Here is an example of his art for these shows:

I hope you enjoyed this selection of postcards showing passenger aircraft art.  There are many more postcards of this type available.  Also, there is a whole other category of airline art postcards that emphasize destinations served or contain other advertising – all of which can form a beautiful collection.

All the postcards shown are from my collection.  They are standard or continental size except when stated to be oversize.  I estimate their availability as follows:  Rare: the S.A.M. S.71 and Air Katanga cards; Uncommon: the Florida Airways Stout 2-AT, Imperial Scipio, TWA DC-4, BWIA Viscount and Aeroflot TU-114 cards.  The rest are fairly common.

If you have any comments on my articles, I would be pleased to hear from you.  Just email me, Marvin Goldman, at worldairsociety@aol.com.

Until next time, Happy Collecting